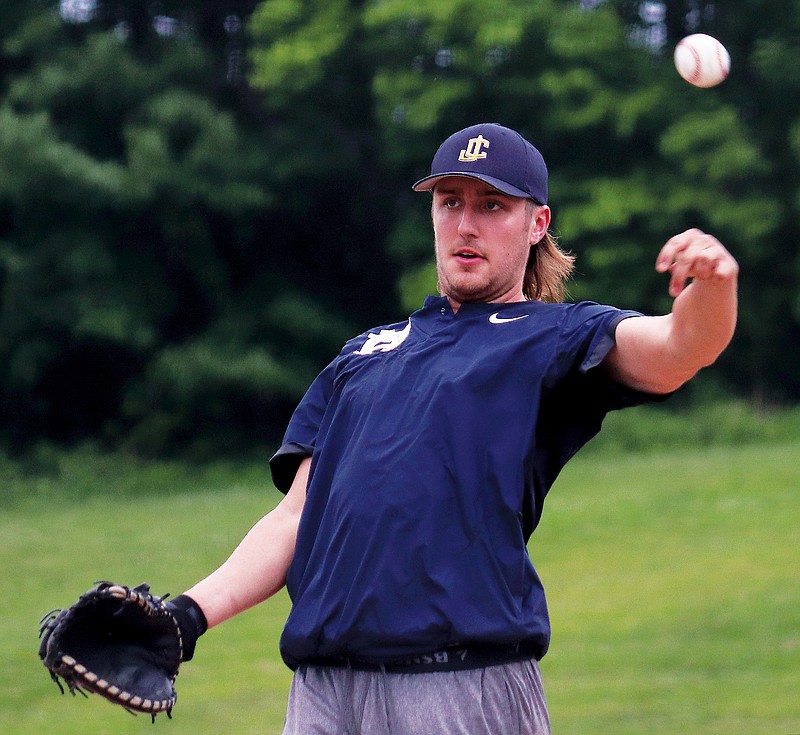 The Jefferson City Renegades only trailed entering two half innings, and they didn’t last long.

The Renegades got ahead early, then came back late for a walk-off 7-6 win against the Joplin Outlaws during MINK League action Sunday night at Vivion Field.

Jefferson City jumped out to a 3-0 lead, then built to a 5-1 advantage before the Outlaws began to come back.

Joplin scored two runs in the seventh when Cade Lott walked and Cody Minn and Matt Woodmansee hit consecutive singles to load the bases. A balk brought in Lott then Liam Bailey singled to left to cut the Renegades’ lead to 5-3.

“They earned their runs, they got hits with runners in scoring position,” Jefferson City coach Mike DeMilia said. “I didn’t think we pitched bad, but sometimes you get beat.”

The Outlaws scored again in the top of the eighth when Max Bruff and Carson Carpenter singled before Lott was hit by a pitch to load the bases. Sam Fagon sent a soft liner just past the outstretched glove of Jefferson City first baseman Carter Mize and into shallow right for two RBI, then Minn grounded into a fielder’s choice to put the Outlaws up for the first time at 6-5.

“We needed to get a baserunner to start, that was the big thing,” DeMilia said.

Jefferson City nearly tied the game in the eighth after Ty Wilmsmeyer and Mize both walked, reaching second and third on a wild pitch, but a strikeout ended the threat.

A popout started the ninth for the Renegades, then Jack Matousek sent a hard ground ball down the right field line for a double to bring life to the Jefferson City dugout.

“Jack has been close the whole year,” DeMilia said. “I see him getting better in batting practice, I felt good with him up there.”

Nolan Drill walked to put runners on first and second, then pinch hitter TJ Racherbaumer hit a ground ball up the middle that looked like a game-ending double play. But the Outlaws’ second baseman misplayed the opportunity and everyone was safe, leaving the bases loaded with one out.

“We got to TJ and off the bat, I thought that was a game-ending double play,” DeMilia said. “Fortunately the guy made a mistake and couldn’t make the out.”

After falling behind 0-2, Adonis Forte fought to a seven-pitch RBI walk, tying the game at 6.

“Then I felt really good, because Adonis had good at-bats all night,” DeMilia said. “Adonis drew the walk and had a really good at-bat.”

A strikeout followed, leaving the bases loaded with two outs for Wilmsmeyer. Wilmsmeyer sent the second pitch of his at-bat down the first base line, where the Outlaws’ first baseman misplayed it, then Wilmsmeyer hustled to beat the toss to the pitcher covering first, scoring Racherbaumer and walking off the win for Jefferson City.

“Speed kills,” DeMilia said. “We’ve got some really fast guys and when you’ve got a guy who can really run, you put a lot of pressure on the defense. I thought we put a lot of really good at-bats together to get it done.”

The Renegades got in front with a lot of help from starter Braydon Boyer who pitched six solid innings, allowing only one run on six hits and no walks, while striking out nine.

“Braydon was really good,” DeMilia said. “He didn’t walk a guy, he got nine punch outs. If you can fill up the zone like that consistently, they hit him hard a couple of times, but when you don’t combine it with walks and errors, it’s really hard to score against us. He did a great job.”

The Renegades went in front in the second when Levi Masloski, Joe Hoerchler and Forte all singled to load the bases, as the Renegades had in the first inning with no scoring luck, but this time Wilmsmeyer singled through the left side of the infield for two RBI.

Jefferson City added another run in the fifth when Taylor Hopkins, Brennan Perkins and Matousek all singled, with Matousek’s flare down the left-field line bringing in Hopkins.

Cody Ott walked with one out in the sixth, then Carter Mize fought to a full count before turning on a pitch and sending it over the right-center field wall for a two-run home run, putting the Renegades up 5-1.

“I thought the bats came alive,” DeMilia said. “We’ve struggled offensively so far and I thought this was by far the best we’ve swung the bats. That’s an encouraging sign.”

Tanner Schmitz was the winning pitcher for the Renegades after throwing the ninth and allowing only one baserunner on a walk.