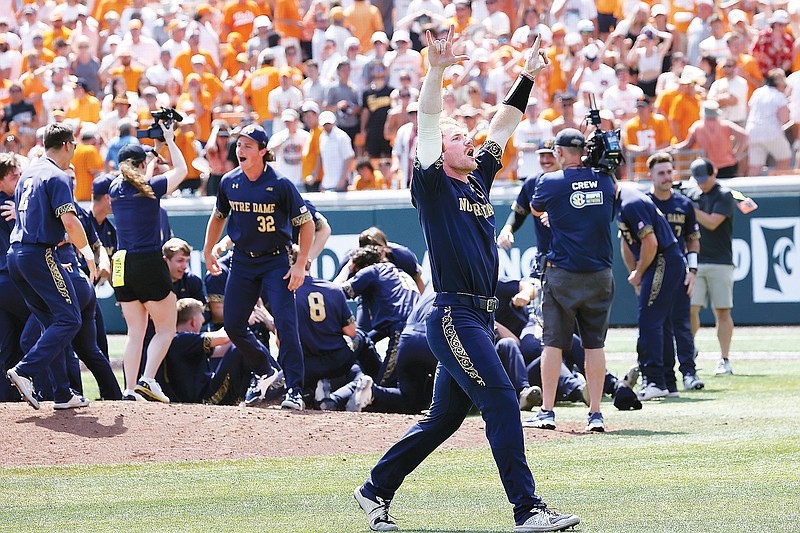 No. 1 national seed Tennessee got knocked out of the NCAA baseball tournament on the same day Mississippi, the last team selected, punched its ticket to the College World Series.

Sunday produced the biggest surprises of a tournament that went mostly according to form in the regional round. Super regionals have made up for that lack of drama.

Notre Dame beat Tennessee 7-3 in the deciding third game of their super regional and joined Mississippi, Oklahoma, Arkansas, Texas and Texas A&M in the CWS.

The final two CWS spots will be filled today when Connecticut plays No. 2 Stanford and Auburn meets No. 3 Oregon State in Game 3s. The CWS begins Friday in Omaha, Neb.

Tennessee is the third straight No. 1 national seed to get eliminated in super regionals. Arkansas was bounced last year and UCLA in 2019. There was no tournament in 2020 because of the pandemic.

“Notre Dame will get to Omaha and enjoy that and probably do some damage. It’s a really tough group,” Vols coach Tony Vitello said. “What needs to stick with our guys, once time passes … What do they say? Time heals all wounds? I don’t know who ‘they’ are, because sometimes those take a long time.”

Until Sunday, the Volunteers were the toast of college baseball with an explosive offense and a pitching staff stocked with projected major leaguers. They finished with a school-record 57 wins after getting out to a 31-1 start and sweeping the SEC regular-season and tournament titles. Their 158 homers were fourth-most all-time in Division I. They lost just one three-game series before the super regional in Knoxville.

The Irish erased a 3-1 deficit in the seventh inning. David LaManna, who entered the game with one home run, hit a two-run shot to tie it and Jack Brannigan followed with the go-ahead blast. The Irish added three more runs in the eighth.

The Irish had been in line for a top-16 national seed, which would have made them a regional host, but the NCAA selection committee made them a No. 2 regional seed and sent them to Statesboro, Ga.

They won three games there, won the super regional opener 8-6 and bounced back from a 12-4 loss Saturday to earn their first trip to the CWS since 2002.

“We’ve battled and fought for years to get to this moment,” said coach Link Jarrett, whose team lost a three-game super regional to eventual national champion Mississippi State last year.

“Those are just exceptional human beings. They grasp what’s going on in the competition, they go do it, and to think this moment would be with a freshman finishing the most critical game, quite frankly, in the history of the program in this venue against that team.”

Notre Dame will take on Texas in its College World Series opener.

Mississippi, the last team to receive an at-large bid and a No. 3 regional seed, beat Southern Mississippi 5-0 in Hattiesburg. The Rebels, who won 10-0 Saturday, posted their first shutouts of the season and Southern Miss was blanked in back-to-back games for the first time since 1987.

Mississippi pitchers allowed just seven hits in the two games and struck out 21 as the Rebels reached the CWS for the first time since 2014.

Oklahoma will return to the CWS for the first time since 2010 after wrapping up its super regional with an 11-2 win at No. 4 national seed Virginia Tech.

The Sooners hit five home runs, two by Tanner Tredaway, and Cade Horton struck out eight during six innings and retired 11 of the final 13 batters he faced.

Oklahoma will open the CWS against Texas A&M, which earned its spot Saturday with a sweep of Louisville.

“Dream come true,” Tredaway said. “We’ve all just worked our tail off. I just can’t be more proud of these guys and all we’ve put into that’s led up to this moment now.”

Arkansas scored twice in the bottom of the ninth inning to beat North Carolina 4-3, with the winning run coming home on Brady Slavens’ single into right field. The Razorbacks are heading to Omaha for the seventh time since 2004.

Texas will make a second straight CWS appearance and record 38th overall after getting out to a big lead early and routing East Carolina 11-1. Ivan Melendez hit his nation-best 32nd homer and Tristan Stevens pitched six strong innings for the Longhorns. The Pirates have made the most tournament appearances (32) without advancing to the CWS.

Stanford roughed up Connecticut ace Austin Peterson for seven runs in 1⅓ innings and forced a Game 3 with an 8-2 victory. Ryan Bruno and Quinn Mathews held UConn to one hit in five shutout innings of relief.