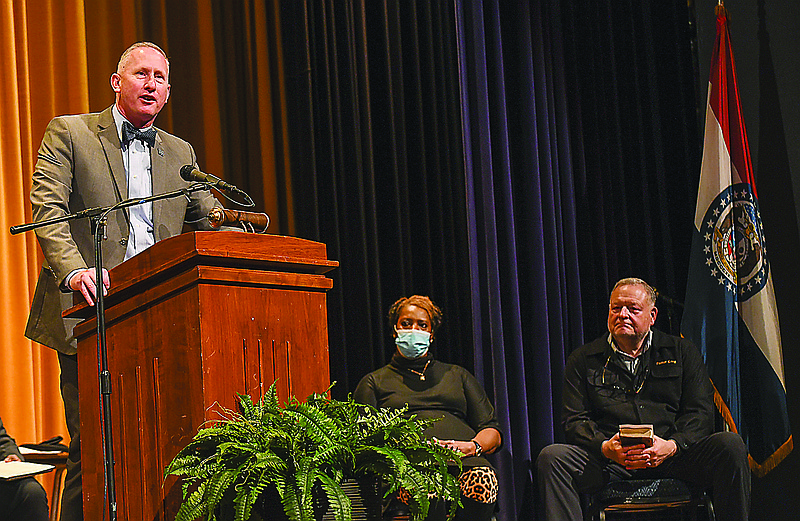 Lincoln University President John Moseley delivered a testimonial as to the purpose and place of LU in 2022 and the importance of what the university can do for its students and their communities. Moseley spoke at a prayer vigil held in Mitchell Auditorium Wednesday, Feb. 9, 2022. Seated at right is Pastor Greg White of Southridge Church and middle is Belinda Woodard, associate pastor at Oak Chapel Baptist Church. (Julie Smith/News Tribune photo)

Lincoln, one of Missouri's two historically Black universities, is addressing a decade-long trend of dwindling enrollment with a two-pronged approach: attracting students from high-yielding metropolitan areas throughout the country and local students from Mid-Missouri.

The demographics of those two primary recruiting sources are dramatically different. Large, metropolitan cities tend to be more racially diverse, whereas Cole and surrounding counties in Central Missouri are overwhelmingly white.

University President John Moseley gave a public speech in April in which he said Lincoln has suffered identity issues, at times uncertain of how to navigate its distinctions as a historically Black university and regional institution attracting a sizable population of commuter students.

"The only way that you have a regional (identity) is if you lift it out purposefully," Sherman Bonds, president of the Lincoln University National Alumni Association, said. "To suggest what he did suggest was a white culture."

University President John Moseley said he doesn't see it that way at all.

"I'm committed to the HBCU experience. I believe that Lincoln will remain a place that celebrates Black excellence of our students," Moseley said. "But it's also a place that all students should feel welcome and invited and gain a valuable education -- and not just in the classroom, in life."

"I'm responsible for the university moving forward, and I want to ensure that the university remains here, keeps its doors open so that we can continue to celebrate its history," he continued. "So I am focused on the future and my future involves all, it has my whole life and it will in this case, too."

After reading about the president's statements in April, Bonds sent a letter to the News Tribune expressing his disagreement, stating he was "mystified by the lack of knowledge the president held regarding the university's history, the underpinning of the African American voice and its sacrifice to this state, the nation and the international community for higher education."

"The tone of the narrative was perplexing," he wrote. "It presented the African American 'space' as a renegotiable platform that could be reduced to the status of a regional college, which diminishes the institution's national and international prominence."

Bonds, a Georgia-based alum, said Lincoln has a single identity and any "regional identity" is encompassed by the university's national presence. He said that larger presence is inclusive and should welcome anyone to attend.

There's no issue with the university recruiting nationally and locally, he said, because regional recruitment has always happened. He's interested in a dialogue about preserving the cornerstone he said Lincoln has historically been for Black excellence.

Lincoln shouldn't alter the identity it's held since its founding and instead celebrate it, Bonds said. He added there should be an appreciation for what Lincoln is, not attempts to convert it into something else.

"This institution for greater than 68 years has opened its doors to all students of all races and the history hasn't been erased in those 68 years," Moseley said. "And so I'm not sure what we're doing now is going to take away from it."

Moseley said he takes every opportunity he can to highlight Lincoln's history and beginnings because he finds value in it. He said every student who passes through the university's halls should understand its founding and why it was necessary in 1866.

"This concern lends itself to this identity issue that I think the university has had a difficult time addressing over the course of its existence," Moseley said. "We would struggle to operate exclusively, in 2022, as a university that did not open its doors to others. Again, I'll say our diversity is our greatest strength."

It's not only ethnic diversity Moseley said Lincoln values, but diversity of thought, age, gender and culture. Lincoln's diversity is what most institutions of higher education strive for, he said.

Moseley said he's not necessarily interested in merging identities on campus, but believes Lincoln can be a place they can co-exist.

"I'm not going to back away from my belief that this is how this university needs to move forward if we're going to continue to be able to serve the mission of providing an education for all," he said.

Bonds said he believes Lincoln should preserve its heritage as a Black space and new university presidents often don't understand how changes can damage that.

Since its founding, Bonds said, Lincoln was a dedicated space for Black people to thrive and espouse a different culture.

"That is what I think my president missed," he said.

Bonds said he's bothered there's not more Black faculty, staff and contractors or more doctoral programs at Lincoln. He also believes it was a mistake for Lincoln to contract with the city on The Linc.

"When I get there, if I'm looking for an HBCU experience, I don't see it," Bonds said of his visits to Lincoln.

Moseley said the concern that he will change Lincoln's HBCU identity has been raised before and he recognizes there is heightened attention on the subject as he is the first white president since the university's founding. But they don't deter him. He said the university's actions will show it celebrates diversity.

"I'm very intentional about how I operate and how our team deliberates and how we come to conclusions and make decisions," he said.

Moseley said the upcoming recruitment class upholds previous trends related to local and metro student recruitment. And not all students from metro areas are Black and not all local students are white.

Bonds said he wants to ensure Lincoln maintains the national and international prominence it has historically wielded to attract students.

Students often select a college, and specifically HBCUs, for the cultural experience they provide, he said.

Lincoln is still the alumni president's top choice of schools. He still advocates for the university to prospective students and said he recommended it to at least three out-of-state students that have plans to enroll in the fall.

Moseley said he hopes people's love for Lincoln outweighs any concern about him leading the university and they would use their passion to work with the university to grow enrollment and provide a better student experience.