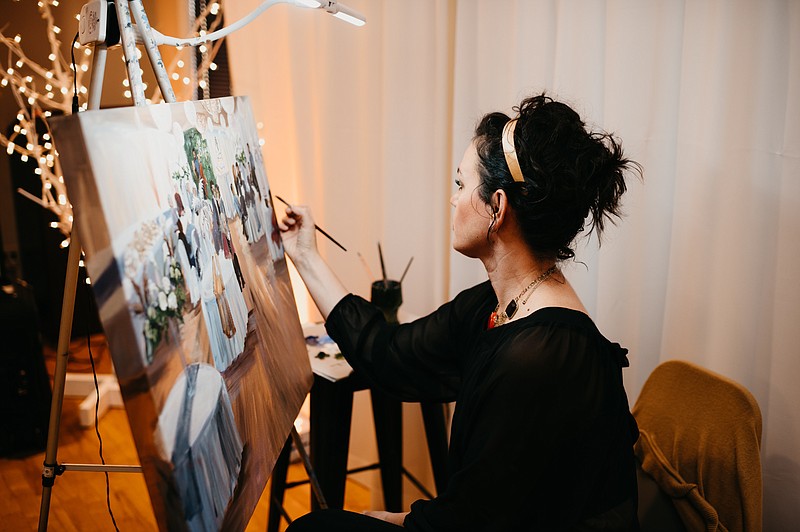 Thin brushstrokes loaded with pastels and smooth acrylic paint hit the canvas as newlyweds and guests dance and spin behind the easel.

The music is loud, the lights are flashing and people are laughing. This is the perfect setting to keep live wedding and event painter Cindy Scott focused on her work.

"The energy inspires me," she said.

It takes the 48-year-old artist about six hours to complete an elaborate painting at a wedding, and the bride and groom can take the one-of-a-kind art piece home with them when the wedding is over. If she stops to talk to guests, it inevitably takes longer. But the small talk motivates her.

"I get involvement from guests and I input that into the painting," she said. "They help make it happen. Good conversations spur me."

Live wedding artistry has become a popular trend recently. The hashtag #LiveWeddingPainter has amassed more than 118 million views on TikTok.

Scott was doing live wedding paintings before it was trendy, and now she is busier than ever. About three to four years ago, she was completing about 40 paintings a year.

Where it all began

"I remember sitting at my grandparents' table when I was a toddler and just making things with whatever scraps of paper that were around," she said.

As an adult, she made art as a side hustle, mainly doing decorative paintings in homes.

Scott completed her first live painting at a luncheon event in 2015.

"I was hooked from the start," she said.

In July of that year, she did her first live wedding painting after someone at a fundraising event saw her work and wanted her at their nephew's wedding.

"I didn't know what I was doing. It was a crazy day," she recalled. She painted for eight hours at the wedding and realized her work wouldn't be finished by the end of the day. "I worked on it for probably another 15 to 20 hours," she said.

Later that year, Scott was let go from her part-time job out of the blue, and she went into panic mode, applying for all kinds of art- related jobs.

"It was one of those things where when one door closes another one opens, and it was like the flood gates opened," she said.

It wasn't long after losing her job that her art business started taking off, allowing her to create full-time and quit the job hunt. "It happened faster than I thought it would. It grew into more than a side hustle," she said.

The night before a wedding, Scott leaves her going-out clothes on the hangers and aims to get a good night's sleep. "I try to sleep a little bit late on day of, but I can't because I'm excited," she said.

Working out, staying hydrated, prioritizing quiet time and adjusting her meal schedule – everything that day is geared toward the job.

Before heading to the venue, Scott loads her kit with tools and brushes, $400-500 worth of water-based acrylic paint and a protein-packed snack.

She takes photos throughout the night to combine with the live action of the reception into one perfect painting for the newlyweds. "There are so many little intricacies I don't want to miss," she said.

Ahead of the wedding, she meets with the couple to discuss moments they would like captured in the painting.

Before Lindsey O'Bryan's October wedding in Jefferson City, Scott learned that her mother wouldn't make it due to being ill and hospitalized.

"I reached out to Cindy the day of the event and asked if it would be possible for her to paint my mother in somewhere, and without hesitation, she agreed and did it flawlessly," O'Bryan said. "This is the only piece I have, and will have at that, of me and my mom from my special day where it looks like she was able to be there with us."

Every painting is unique, but each one tends to show lovely flower arrangements and decor and highlights the couple surrounded by their friends and family. Scott analyzes the venue, table settings and windows, and she hones in on the most beautiful and special aspects of the setting. Sometimes guests come to Scott as she is painting to point out important people to feature.

At Ryann Kampeter's New Year's Eve wedding reception at Capitol Plaza Hotel, her mother-in-law surprised her with Scott as a wedding gift.

"I reached out to Cindy and sent her an email through her website, wanting to see if she was available New Year's Eve 2021. She, unfortunately, wasn't," Kampeter said. "Little did I know she was actually covering for my mother-in-law because she had reached out to her already."

After an exchange with one of Kampeter's bridesmaids, Scott learned that the bride's mother had died 10 years prior, so she painted a cardinal sitting on their wedding table in honor of her. "That cardinal is a symbol of my mom looking over our wedding day," Kampeter said.

Of all the pictures, videos and gifts that brides and grooms receive on their big day, a custom painting is in a class by itself – something to be treasured. "Out of all the things we will have forever, this is hands down the piece I will cherish the most," O'Bryan said.

The price of a specially made painting starts at around $1,500 but varies case by case depending on the location of the wedding and the size of the canvas. Those who are interested in having Scott capture their wedding through a live painting can contact her at cindyscottartistry.com to get a quote. 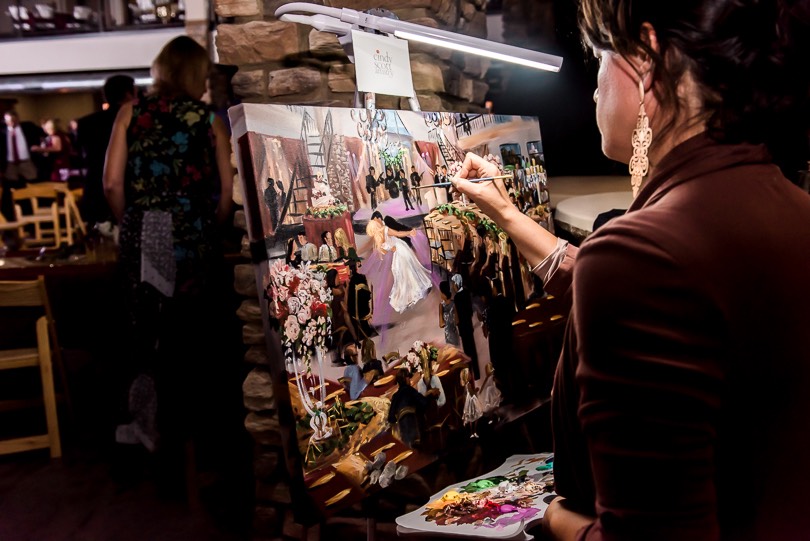 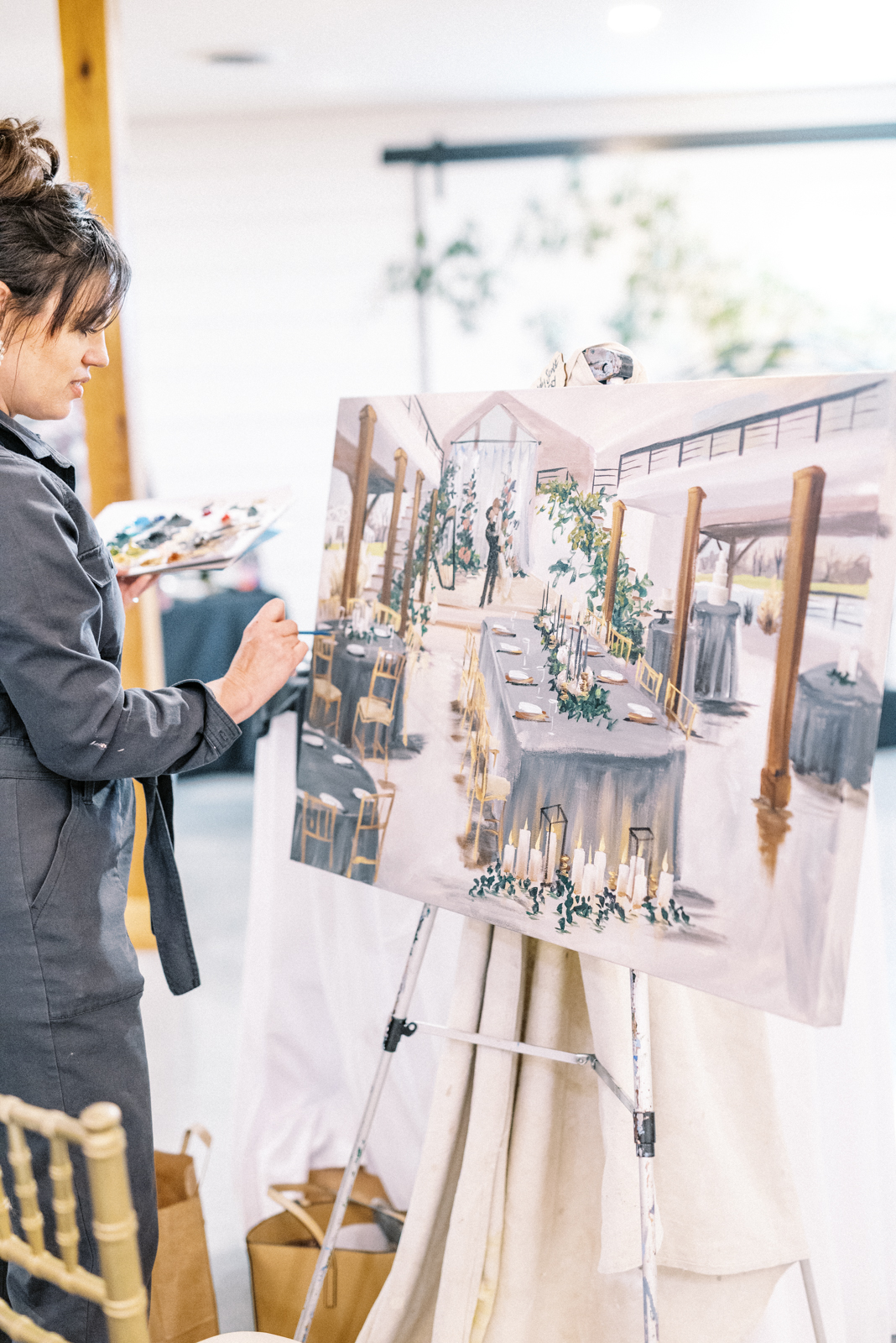