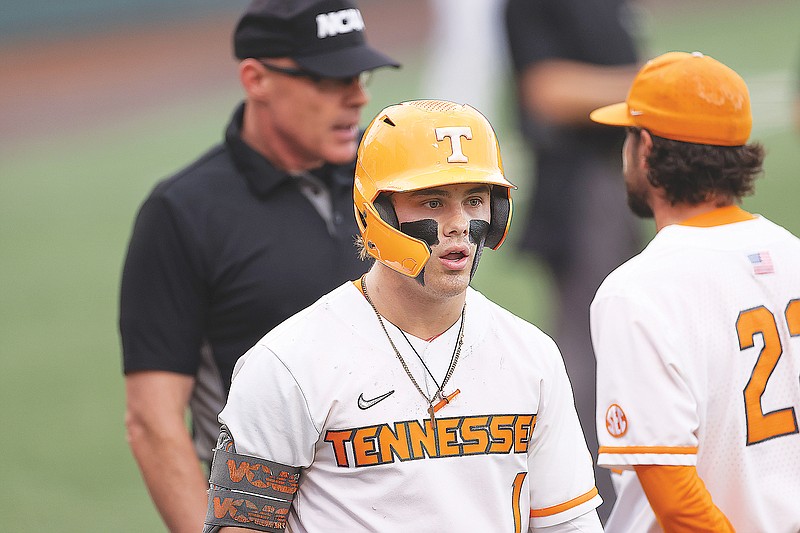 Tennessee’s Drew Gilbert walks to the dugout Friday after being ejected for arguing a called strike during an NCAA Tournament game against Notre Dame in Knoxville, Tenn. (Associated Press)

Notre Dame pushed No. 1 national seed Tennessee within a game of elimination from the NCAA baseball tournament Friday night. Texas A&M, East Carolina and Oklahoma moved within one of reaching the College World Series.

The Irish pulled the biggest upset of the tournament so far, getting out to a big lead early and holding off the Volunteers 8-6 in Game 1 of their best-of-three super regional in Knoxville, Tenn.

Troy Claunch’s bases-loaded single in the ninth inning gave No. 5 Texas A&M a 5-4 walk-off win against Louisville. No. 8 East Carolina broke open its game against Texas with a five-run eighth inning and won 13-7.

Oklahoma, in supers for the first time since 2013, held off No. 4 Virginia Tech 5-4 for their eighth win in nine games.

Notre Dame was the No. 2 regional seed in Statesboro, Ga., last week and scored a total of just 11 runs while sweeping three games to advance.

The Irish were up 8-1 in front of the orange-clad full house at Lindsey Nelson Stadium after Jack Brannigan’s three-run homer in the fourth inning. Notre Dame hit a season-high four homers, and Jordan Beck’s homer in the ninth was all freshman Jack Findlay allowed the last two innings.

Only one No. 1 national seed has won the championship under the current tournament format, and that was in 1999. Vols coach Tony Vitello said he’s confident his players can deal with the pressure of an elimination game today.

“This is the time of year where crazy stuff happens,” he said.

The Irish will throw their ace, John Michael Bertrand, and the Volunteers will be without All-SEC outfielder and .365 hitter Drew Gilbert, who must sit out after being ejected in the fifth inning.

Texas A&M left the bases loaded in four of the first eight innings against Louisville before loading them again in the ninth against Michael Prosecky. This time Claunch drove Prosecky’s first pitch through the right side to put the Aggies a win away from the CWS after failing to even qualify for the SEC Tournament last year.

East Carolina has never made the College World Series in 31 previous NCAA Tournament appearances. No team has fallen short so many times in the tournament.

The Pirates won for the 22nd time in 23 games. But coach Cliff Godwin hasn’t forgotten about 2016, the year his team won Game 1 of its super regional at Texas Tech and then lost the next two.

“I’m taking it day by day,” said Godwin, now 2-6 in four super regional appearances. “This has been a great group for me to be a part of and I’m not going to look too far ahead.”

A record crowd of 5,723 showed up at Clark-LeClair Stadium and made its presence felt.

“I definitely think the score would have been different if we had been playing at Texas,” Godwin said. “I’m thankful we can play at our home field and play in front of all our fans. They’ve been waiting along time for this, going to back to when I played here.”

Oklahoma jumped on Virginia Tech starter Griffin Green in Blacksburg, Va. Green lasted just one inning plus two batters for his shortest start of the season, and OU was up 5-0 in the sixth.

The Hokies tried to come back, with Carson Jones and Jack Hurley each hitting two-run homers, but OU right fielder John Spikerman made a diving catch of Gavin Cross’ fly to end the game and put the Sooners within a win of playing in the CWS in Omaha, Neb., next week.

East Carolina was clinging to an 8-7 lead in the eighth inning when Alec Makarewicz led off the bottom half with a home run that probably would have been a flyout had it not been for a mix-up.

Left fielder Eric Kennedy looked set to make the catch near the fence, but center fielder Douglas Hodo III Hodo cut in front of him and the ball tipped off Hodo’s glove and went into the stands.

“I knew it was going to be a wall scraper,” Makarewicz said. “Luckily the fans were screaming as loud as they were and (Kennedy and Hodo) jumped up and hit each other and it went over.”

The play reminded Texas coach David Pierce of Carlos Martinez’s famous home run for Cleveland against Jose Canseco and the Texas Rangers in 1993. Canseco went to the wall and the ball bounced off his head and over the fence.

“It was like Canseco, except his glove, not his head,” Pierce said.

Gilbert stood with his mouth agape after Levy tossed him, and Anderson came out of the dugout to protest.

NCAA rules call for Gilbert, who came in batting a team-best .373, and Anderson to be suspended for Game 2.

Crew chief Billy Van Raaphorst said in a statement Gilbert argued several pitches from center field in the top of the second inning. Van Raaphorst said he warned Gilbert to direct his comments to his team and not umpires or Notre Dame.

“He said OK and that he just gets excited,” Van Raaphorst said. “During the fifth inning following strike one, Tennessee batter Gilbert yelled an expletive, followed by another expletive as he walked out of the box and was subsequently ejected.”