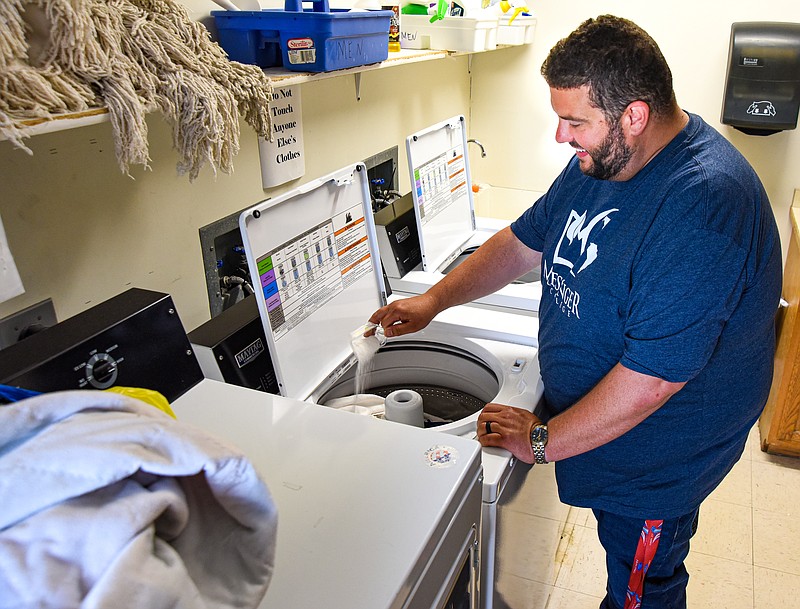 Salvation Army Center of Hope Director Brian Vogeler is once again able to do laundry at the shelter after Lowe's replaced two wash machines purchased last year. Both machines had problems and when trying to get the work done under warranty failed, Lowe's of Jefferson City replaced the pair. (Julie Smith/News Tribune photo)

The washers and dryers at the Salvation Army Center of Hope shelter in Jefferson City see a lot of use.

A lot. The center uses the machines for its own purposes. But clients use them as well. And the center has remained full for several years.

"Our washing machines were five or six years old and were in terrible shape," Vogeler said.

The machines worked well for the nonprofit for about 10 months, then one washer began experiencing transmission issues. And the second one developed an electrical issue, and started tripping the ground-fault circuit interrupter (GFCI) to which it was connected.

Staff called the manufacturer to get repairs done, but there was a mix-up with the repair company, Vogeler said.

Eventually, the shelter determined it needed to replace the washers, which remained under a one-year warranty, or so administrators thought.

Vogeler called Whirlpool and spoke with staff there.

"These things are limping," he told them. "We really have to have washers here."

But, when he told the company that the washers were being used in a shelter, they responded that placing the appliances in a shelter voided the warranty.

He argued until he was blue in the face that the washers were a necessity and should remain under warranty.

But, the argument went nowhere.

Whirlpool continued to refuse to replace the washers.

Vogeler said he called a manager at Lowe's and told him the manufacturer claimed putting the appliances in a homeless shelter voided their warranties.

The Lowe's manager asked Vogeler to be patient, and said he'd work on the issue. The next day, the manager called and said the store would replace the appliances, deliver them and set them up at no cost.

"They came by. They took our old ones away. They delivered the new ones. They set everything up for us," Vogeler said. "And they said, 'We're going to make everything right for you guys.'"

When reached by phone, management at Lowe's said the company's policies allow for it to be philanthropic and help the community where it can. And it acknowledged that the Salvation Army does important work in the community. Lowe's also encourages associates to volunteer with nonprofit organizations, such as Habitat for Humanity.