13 seconds: Communication an issue in Bills’ blown lead in playoff game vs. Chiefs 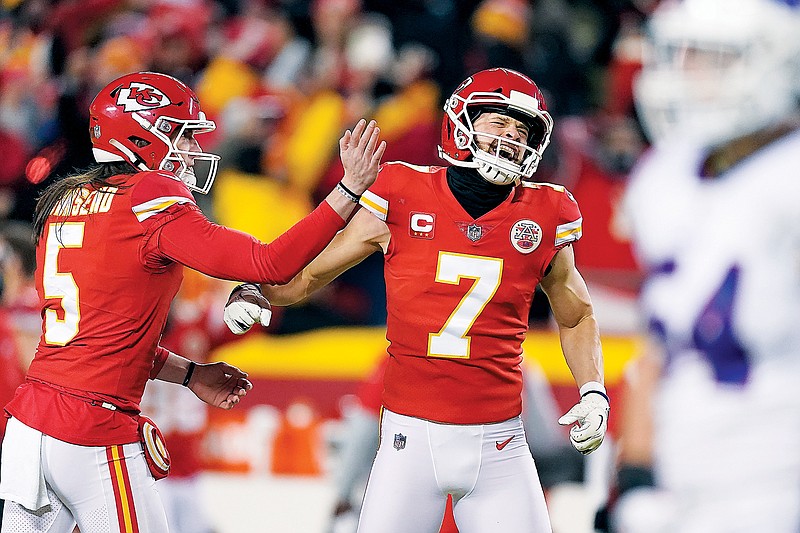 In this Jan. 23 file photo, Chiefs kicker Harrison Butker celebrates after kicking a 49-yard field goal to send the AFC playoff game against the Bills to overtime at Arrowhead Stadium. (Associated Press)

ORCHARD PARK, N.Y. -- There’s nothing Matthew Smiley can do to change Buffalo kicking off into the end zone on a fateful play which contributed to the Bills squandering a three-point lead in the final 13 seconds of regulation of a thrilling and heartbreaking overtime loss to Kansas City in an AFC divisional playoff game in January.

What the Bills newly promoted special teams coordinator could address Tuesday was having his unit better prepared if such a situation ever arises again.

In declining to lay specific blame, Smiley shed light on what went wrong by citing communication as being an issue.

“It’s the overall communication. Whether it’s 13 seconds to go in a playoff game or whether it is a Tuesday practice and what drill is going to go where, it’s improving communication that I think is very important,” Smiley said in addressing reporters for the first time since replacing Heath Farwell, who abruptly left Buffalo for the same role with the Jacksonville Jaguars in February.

“I would say we did not execute exactly the way we wanted to execute,” said Smiley, who spent the previous five seasons serving as Buffalo’s assistant special teams coordinator. “So any time that’s the issue, there’s a lack of communication when there’s a lack of execution. I think they go hand in hand.”

The decision behind having Tyler Bass go for a touchback as opposed to kicking the ball short of the goal line has been debated around the NFL ever since, and been a particular sore spot among Bills coaches and players, who have previously balked at providing much insight into what happened.

Coach Sean McDermott shut down any conversation about the play most recently at the NFL combine in March, by repeating how it came down to execution and saying the blame lies with him.

“I feel like I’ve addressed it to the point it needs to be addressed,” McDermott said.

At issue is how the Chiefs, with three timeouts, benefitted by starting at their 25, from where they gained 44 yards on two plays to set up Harrison Butker hitting a 49-yard field goal to tie the score at 36 as time expired.

Upon winning the coin toss in overtime, the Chiefs sealed the victory on their opening possession, with Patrick Mahomes’ 8-yard touchdown pass to Travis Kelce to cap an eight-play, 75-yard drive.

What will never be known is how the outcome could have been different had Bass kicked the ball short, and whether the Chiefs would have had enough time to gain an extra 10 or 15 yards in what was an otherwise enthralling game. The teams combined to score 28 points in the fourth quarter, which featured three lead changes in the final two minutes.

Farwell’s departure also left unanswered questions because there was no indication from the Bills his job was in jeopardy. Buffalo announced Smiley’s promotion hours after news surfaced Farwell was getting hired by the Jaguars.

Farwell is scheduled to address reporters for the first time since being hired Thursday.

Special teams isn’t Buffalo’s only unit to bear the blame, given how the Bills defense unraveled in allowing the Chiefs to not only tie the game but win in overtime.

Defensive coordinator Leslie Frazier, who also addressed reporters Tuesday for the first time since the loss, hoped it becomes a learning experience for his unit this upcoming season.

“I think we’ve moved on from that, and you’ve got to be looking forward in this league and just learn from wins and learn from losses as well,” Frazier said.