Stone from Capitol to see new life across Missouri 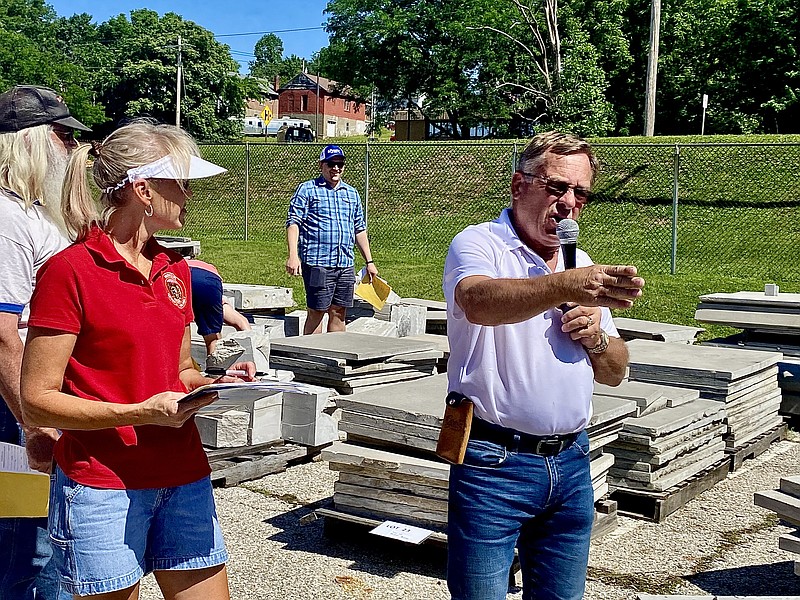 Dozens gathered on a temperate day as the Missouri State Capitol Commission auctioned off stone salvaged from the exterior renovation of the statehouse. Hundreds of pavers weighing upwards of 75 pounds each went to the highest bidders, with plenty of interest among those bidding on -- and walking away with -- multiple lots, which saw pallets of pavers stacked atop one another and some lots ranging six pallets deep.

While the total amount of money raised was not yet available, the first 20 lots went for around $15,500 -- and there were still 100 lots to go after them.

Dana Rademan Miller, who serves as chief clerk of the Missouri House of Representatives and a member of the State Capitol Commission, said that money was going right back into the commission's restoration efforts.

"We didn't know what to expect, honestly -- no one knew who would show up, we just did our best to advertise and to get the word out. The goal was to let people have access to the stone and not have to put any of it in a landfill," Rademan Miller said. "I was kind of amazed. I don't know what our final tally is yet, but I'm very pleased with the turnout, and every dollar raised here is going to go into repairing and restoring the art in that building."

The stone itself was going into other projects around the state in many cases. Marcia Burton, a local whose husband works in the building, said the lot they were splitting with another family would see stone repurposed for a fire pit and their front steps. Other local winners were using their stones as showpieces in their yards or gardens, while bidders from Columbia hoped to add to their supply of construction materials.

Leslie Stock was a regular bidder who won several lots during the two-hour auction. She said she planned to use the stone to create a folly -- a structure made to look like ruins or the remnants of a castle, a decorative practice more common in Europe -- and that the repurposed material would fit in well on a historic property.

"There were particular pieces that were pretty recognizable, and we want them for a folly project," she said. "My husband's family settled in Cooper County in the 1800s, and we have a century farm, and it just seemed fitting to add the history of the Capitol there on the farm as well."

It wasn't just locals who came out on a sunny Friday morning. Mike Benz, an architect from St. Louis, joined the fray after a last-minute request from a client who adored history and asked him to grab some pieces for a home project. Benz said he spent upwards of $12,000 at the auction.

"A lot of it is just to figure out what kind of items we can use on the project as a memorial to the Capitol," he said. "He just loves architecture and loves history. So I got a text from him last night saying, 'Hey, go to this thing.' So I just came to buy a bunch of cool stuff to work with."

Other attendees had more experience working in the statehouse themselves including the auctioneer himself, Bill Gratz, a former state representative from the area who volunteered his services for the auction. Other elected officials past and current also made it out for the event.

Rep. Doug Clemens, a St. Louis County Democrat who has served two terms in the lower chamber thus far, said the day was a unique opportunity to give pieces of the state's history a new home.

"How often do you get a chance to purchase a piece of Missouri history? If for nothing else, I wanted to see what was here -- I did get a couple of sculpted pieces here, and I'm very happy with them," Clemens said.

Another attendee comes from a prominent political family in Missouri. Former Congressman and state Rep. Russ Carnahan, whose late father Mel served as governor, mother Jean served in the U.S. Senate and sister Robin served as Missouri's secretary of state, said he was happy to come out and bid.

"I had just heard about it and had to come," Carnahan said. "After so many years around the building and the area, I was excited to have the chance to buy a piece of that history, though I'm not sure what I'm going to do with it just yet."

The multi-year renovation project, which wrapped up in early 2021, saw around 5 percent of the building's stone removed.

Much of the auctioned materials were paver stones, with bases, capstones and decorative pieces made from stone sourced from Carthage. Buyers have two weeks to collect their purchased lots.