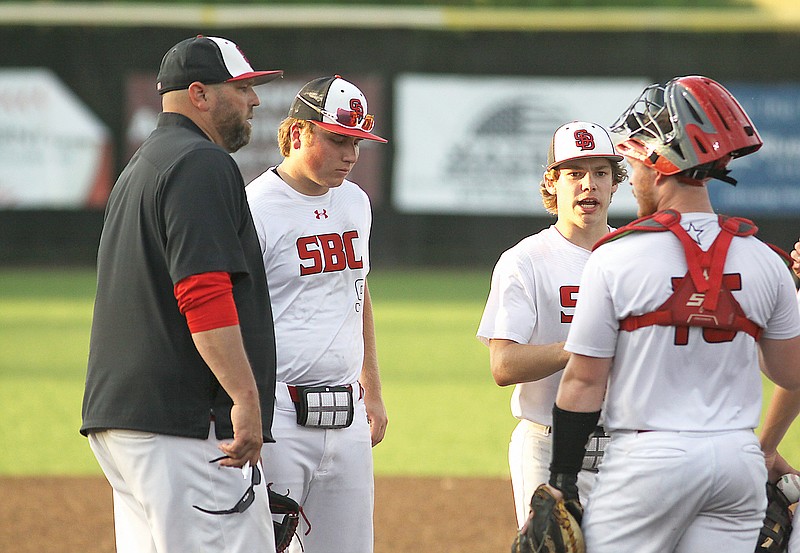 In this May 19 file photo, Southern Boone coach Brian Ash (left) talks with his players during a mound visit in the Class 4 District 8 Tournament championship game against Blair Oaks at Southern Boone High School in Ashland. (Greg Jackson/News Tribune)

Southern Boone broke a tie with Logan-Rogersville by scoring four runs in the sixth inning and adding 0two more in the seventh, pulling away to an 8-3 victory in the Class 4 state championship game at U.S. Ballpark.

Southern Boone ends the season with a 34-2 record, claiming the first state title in program history.

Ash previously led Blair Oaks to state titles in 2006 and 2007 and guided Jefferson City to a state title in 2017.

With the score tied at 2 through five inning, Bradly Smith began Southern Boone’s big sixth inning with a one-out single. Carter Karotka followed with a single to right field and Chase Morris drew a walk to load the bases.

Austin Evans’ sacrifice fly to right field scored Smith to give the Eagles a 3-2 lead.

The next batter, Ryker Zimmerman, hit a triple to center field, scoring Karotka and Morris to extend the lead to 5-2. A balk by the Logan-Rogersville pitcher scored Zimmerman to give Southern Boone a four-run advantage.

In the seventh, Bob Andert hit a leadoff triple to right field for the Eagles, then a walk and an error loaded the bases. Morris singled to left field, scoring courtesy runner Tristan McKee and Carter Salter to make the score 8-2.

Logan-Rogersville’s Curry Sutherland hit an RBI triple in the bottom of the seventh, but Karotka got the next batter to line out to end the game.

Logan-Rogersville (26-8), which was ranked No. 4 in the final MHSBCA regular-season poll, held a 2-0 lead at the end of the first inning. Blythe Blakey scored on an error and Clay Palen scored on a sacrifice fly for the Wildcats.

Southern Boone got on the scoreboard in the second inning, when Karotka hit a two-out single with the bases loaded, scoring Hayden Steelman.

In the top of the third, Logan-Rogersville walked the bases loaded, then Evans scored on a wild pitch to tie the game at 2.

Smith, who pitched an inning of relief in Wednesday’s state semifinal game, started on the mound for second-ranked Southern Boone. In four innings, he allowed two runs on two hits with two walks and one strikeout.

Karotka pitched three innings of relief to earn the win. He gave up one run on two hits with two walks and two strikeouts.

Southern Boone opened its Final Four on Wednesday afternoon with a 6-5 victory in 11 innings against the Marshall Owls.

The Eagles trailed 5-3 heading to the bottom of the seventh, down to their final three outs. Steelman drew a leadoff walk, then courtesy runner Tate John moved to second base on Jace Reynolds’ single, putting the tying run on base.

A lineout double play put Southern Boone one out from defeat, but Salter was hit by a pitch to put the tying run back on base, then a passed ball moved both runners into scoring position.

Smith hit the next pitch for a single into center field, scoring both runners to tie the game and force extra innings.

Southern Boone left the winning run on base in the eighth, then left the bases loaded in the ninth. Marshall had runners on second and third base with no outs in the ninth, but Salter worked around that jam with a pop-up, a strikeout and a flyout.

In the bottom of the 11th, Smith was hit by a pitch with two outs, then Karotka walked and Morris was hit by another pitch to load the bases. Evans then hit a 1-2 pitch over the right fielder for a walk-off RBI single.

Unranked Marshall (12-19) led 4-0 after the top of the third inning. Evans got Southern Boone on the scoreboard with an inside the park home run down the right-field line in the bottom of the third.

In the fourth, Karotka hit a sacrifice fly to right field, scoring Reynolds to make it a 4-2 game.

Both teams scored a run in the sixth. Salter hit a leadoff double for the Eagles and scored on a groundout by Karotka to cut the deficit back to two runs.

Steelman pitched the first 4⅔ innings for Southern Boone, allowing four runs (one earned) on two hits with six walks and four strikeouts. Salter followed with one unearned run and three hits allowed in 5⅓ innings. He struck out six and walked three.

Smith pitched a 1-2-3 inning in the 11th to earn the win, getting two groundouts and a strikeout.

Evans went 3-for-5 with two RBI to lead the Eagles’ offense, while Zimmerman, Salter and Smith each had two hits. Karotka and Smith also had two RBI each.