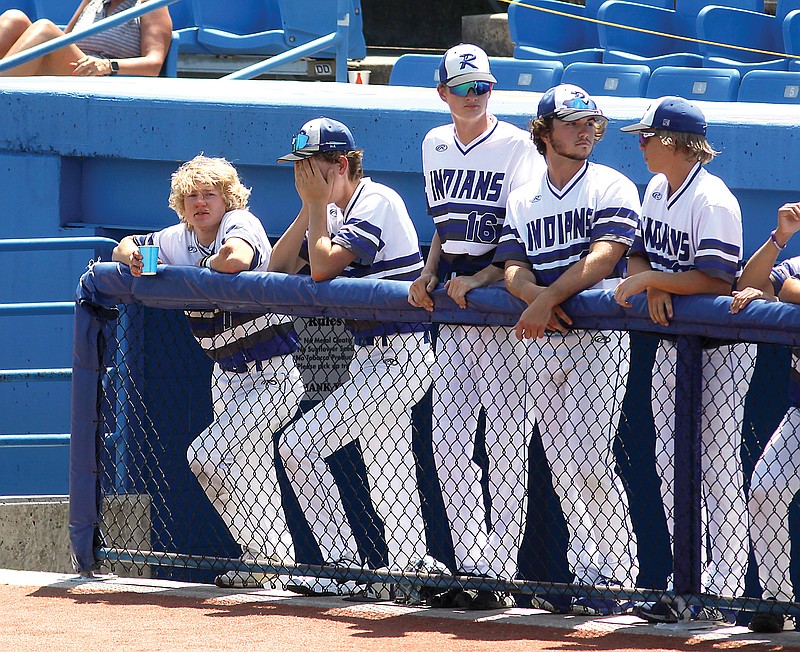 OZARK -- When Monday’s Class 2 state semifinal game ended against Plattsburg, Russellville senior Isaiah Kauffman thought his high school career might be over. And there was still a state championship game to be played.

Kauffman was involved in a big collision on a play at first base, leaving the game in the fourth inning of Russellville’s 3-2 victory in eight innings against Plattsburg.

“I was pretty prepared for the worst,” Kauffman said.

After a handful of grueling hours of uncertainty after the game, Kauffman learned he had been cleared to play in the state title game for the Indians. He helped them win their first state title Tuesday, as Russellville topped Portageville 5-3.

“It feels great to be the ones that won the state title,” Kauffman said. “Since I’m a senior, this was my last chance, and we did it.”

Plattsburg’s Nathan Bash put down a sacrifice bunt against Russellville pitcher Charlie Miller, and with first baseman Alex Oligschlaeger charging the ball on the bunt, that meant Kauffman had to run over from his position at second base to cover first base.

Miller threw the ball to Kauffman for the out, but Bash ran into Kauffman as he reached the bag, knocking him to the ground and allowing the eventual tying run to advance an extra base.

“I remember him coming at me,” Kauffman said. “And then I remember looking down at my arms and there was blood everywhere. Everyone was circled around me.”

The game was delayed for 10 minutes as a trainer tended to Kauffman, who left the game and did not return.

“I remember walking into the dugout and dozing off a little bit,” Kauffman said. “It slowly came back to me about 10 minutes later.”

The bleeding eventually stopped and Kauffman was able to watch the rest of the game from the dugout.

“I was definitely going to cheer the team on,” he said.

Either of those two possibilities would mean he couldn’t play in the state title game, which meant his season would be over.

“It was so much of, ‘Oh my gosh, I can’t play tomorrow,’” Kauffman said. “So much was overloading me. I was sad, mad, everything at the same time.”

He cleared the concussion protocol and X-rays were negative for a fracture. He would be able to play baseball the next day.

“I just felt like I had another opportunity to make the last game count,” Kauffman said.

His first act was to tell Russellville coach Lucas Branson the good news.

“I texted him and showed him the papers from the hospital,” Kauffman said. “I said, ‘I’m going to play tomorrow.’”

It was a warm welcome for Kauffman when he returned to the team’s hotel.

“They brought me the information back and said as long as he had a good night’s sleep, didn’t have any dizziness or headache issues, no nausea or anything like that, he was good,” Branson said.

“He said he slept better (Monday) night than he did the night before, so obviously, that made me feel pretty good.”

Kauffman was inserted back into his usual spot in the starting lineup against Portageville, batting leadoff and playing second base for the Indians.

Branson said when Kauffman left Monday’s game, it clearly had an effect on the players’ emotions the rest of the game. Having him back in the starting lineup for Tuesday’s contest provided a big boost for team morale.

“I know at that point, it’s going to be able to allow our kids to relax,” Branson said. “There’s not going to be that pressure of guys having to move positions in the last game of the season. We don’t have two days to practice to figure it out. That allowed everybody to be at ease, because they’re comfortable in their spots and know how to perform.”

In his first plate appearance, Kauffman hit a 3-1 pitch to left field for a leadoff single. He then scored from first base on a triple hit to the right-center field gap by Jake Schulte, giving the Indians a 1-0 lead in the title game.

“I was a little nervous (about that first at-bat), but you just have to get over the fears and try to make history for our team,” Kauffman said.

Defensively, Kauffman cleanly fielded all three groundballs and one pop-up hit his way. And there were no sacrifice bunts by Portageville, so there was no need to cover first base.

“I played good defense today,” Kauffman said. “I wasn’t affected too much by it, my vision was never off. That’s all I needed, was my vision and my hands to make the play.”

After the final out, Kauffman joined his teammates in the celebratory dogpile near the pitcher’s mound, something he wouldn’t have been able to do if he had suffered a concussion or a fracture.

“We talk about leaving a legacy,” Branson said. “You can’t outdo what we were able to accomplish today, but to be able to say you’re a state champion and go out on top, it’s got to be a special feeling for all of them.”