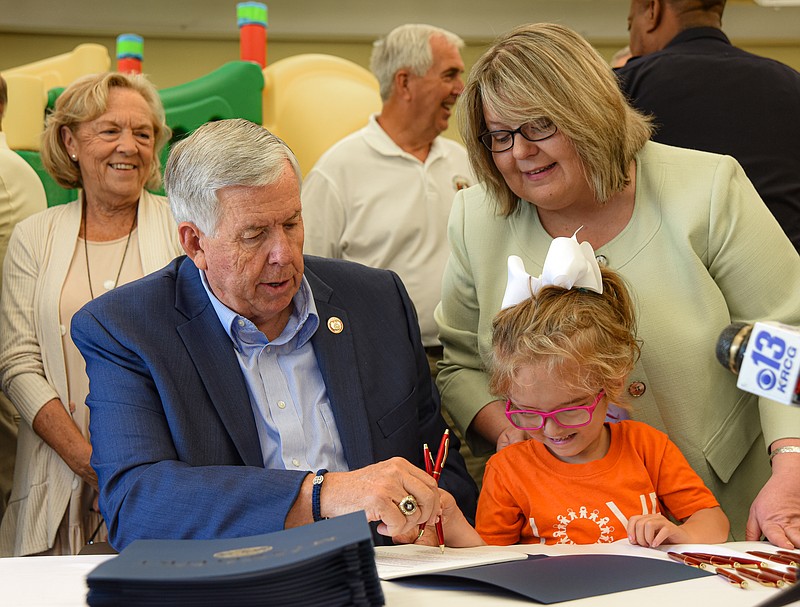 Debbie Hamler, background left, the longtime executive director of The Special Learning Center, looks on and smiles as Missouri Gov. Mike Parson, seated at left, helps six-year-old Abby Fisher hold the paper down so she could sign her name to HB 3020 during a signing ceremony Wednesday, July 20, 2022, at SLC. Standing in the background middle is Rep. Bruce Sassman, R-Bland, who supported this legislation through the House of Representatives. Standing at right is Stephanie Johnson, current executive director at SLC. Fisher, who will attend kindergarten this fall, arrived at SLC at a very young age in a wheelchair, and with therapy and hard work moved up to a walker and later crutches, and now can walk independently on her own. (Julie Smith/News Tribune photo)

Doctors told Abby Fisher's parents her birth defects would prevent her from ever walking.

But she's a fighter.

At a toddler's age, she required a wheelchair. Working with therapists at The Special Learning Center, Fisher transitioned from a wheelchair to a walker at age 4.

She later moved to crutches.

Fisher is walking independently and recently carried her own lunch tray while attending a summer school program.

That is a milestone.

"I see miracles happen here every single day," SLC Executive Director Stephanie Johnson said. "It's unbelievable. There's nothing like watching a child, like Abby, walk for the very first time in her life. And I got to see Abby walk for the first time, and it changed my life."

A $3.5 million state investment in SLC will allow more of those miracles to happen as it launches plans for expansion into a new $7.7 million facility.

Gov. Mike Parson and state lawmakers were at SLC on Wednesday to announce the state commitment of federal American Rescue Plan Act (ARPA) dollars and ceremoniously sign the appropriation bill. The funds have already been dedicated to the Special Learning Center as Parson officially signed the bill at the end of June.

SLC is a private nonprofit agency that provides comprehensive education and therapy services to children with developmental delays and disabilities. Its 70-person staff served more than 800 children from 11 counties in 2021.

The planned state of the art facility will be a special education, childcare and pediatric therapy center, allowing SLC to expand each of those services and reach into new areas, such as autism programs and feeding therapy services.

"It's going to make our dream become a reality," Johnson said.

Expansion is necessary because SLC has outgrown its current facility, which was built in 1991 before the nonprofit added on two wings. The number of children receiving services from SLC has increased 30 percent during the past five years and 13 percent since 2020.

"I've been here about 18 months, and when I walked in there were 100 kids on the waiting list," Johnson said. "And we are landlocked here, you know, we're between the two schools, and we've got the new road behind us."

SLC plans to sell its current building and combine the funds with the $3.5 million state appropriation and an upcoming capital campaign aimed at developing the new facility.

Plans for a new facility date back to before the COVID-19 pandemic, when SLC formed a capital campaign for the full $7.7 million. Those plans were put on hold but revived this year as the nonprofit approached state lawmakers for some federal ARPA funding.

"It's much easier when you know that half of it is coming, versus starting at zero," Johnson said.

Bernskoetter said he was happy to play a part in what he sees as an important development for Central Missouri.

"I really appreciate the governor buying into our idea of making this bigger," he said. "Like Stephanie said, we have so many more kids that we can serve and so I appreciate that."

Parson, who has a great-niece who is autistic, said he supports investments in early childhood interception because they're more beneficial and tend to be more cost-effective for the state. He recalled the time his family was excited his great-niece ordered food at McDonald's for the first time.

"That's what $3.5 million is about," he said. "It's about trying to really get it where it needs to go, trying to support the people in here working in this facility, Stephanie and her team, and make sure we're taking care of these kids."

Sarah Neuenswander, who has worked at SLC as an early childhood special-education teacher for 23 years, said the investment will equip her with the resources she needs to do her job.

"There are some really cool things to help support children now just to help them to stand, to eat, to drink, and then of course all the medical advances," she said. "We get a lot of notes from doctors on how to care for the children, and we just want to make sure that we're keeping everybody safe and helping them make progress where they have trouble."

Neuenswander said access to those services is particularly important while children are still learning and developing.

Ken Theroff's daughter attended SLC from 1-3 years old, he said, and it made all the difference.

"The investment early in children's futures and development yields so much better results than if we wait until later," he said. "I saw that with my own daughter."

Theroff, a member of the SLC Foundation Board, said the investment is a good way for the state to leverage ARPA funds because SLC will use them efficiently.

Cyndy Schnieders, another member of the SLC Foundation Board, said the state investment is a positive start to what will likely be a quick capital campaign.

"Our town is so giving," she said. "We will meet our goal way before we need to."

Debbie Hamler, who served as SLC executive director for more than 35 years before her retirement in 2021, said the state investment is a monumental step.

"Our community is very, very generous, and we have gotten some good grants in our day. But on my watch as director, we never got something this big," she said. "So I am thrilled to death. I am so thrilled."

Hamler said she has no doubt SLC will raise the rest of the funds it needs.