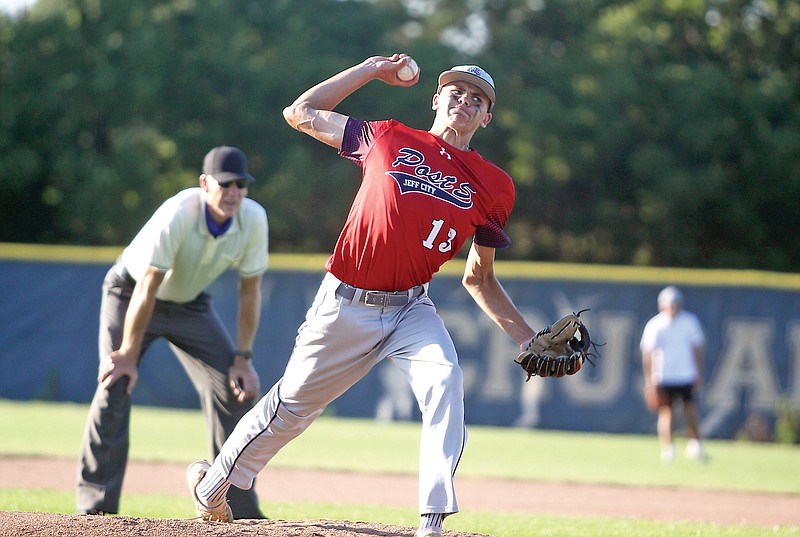 It has been a near-perfect summer for the Jefferson City American Legion Post 5 Seniors.

Jefferson City has been unbeaten since June 12.

“You knew the talent was out in the area. You just didn’t know how it was going to come together on this team.”

The Post 5 Seniors are comprised of players from Helias, Fatima, Blair Oaks, California, St. Elizabeth and New Bloomfield. Their summer season began less than a week after the end of the high school baseball season.

“That’s one of the biggest things, is how quickly they can accept their role for this team,” Vaughan said. “This team is full of top players from every high school. Not everyone can play shortstop, not everyone can hit in the top of the order. The quicker they make that adjustment, they more success we’re going to have later in the year.”

It didn’t take long for the team to find its chemistry.

Although the Post 5 Seniors lost in the semifinals of the American Pride & Freedom Legion Tournament in Murray, Ky., to Paragould (Ark.) Post 17, they followed that by winning their next three tournaments.

“Just the way our lineup stacked up and the depth we had in our pitching, it was pretty obvious that first week, that we have something special with this team,” Vaughan said.

“We’ve seen a lot of good teams and we’ve competed every game, even in the one we lost,” Post 5 Seniors shortstop Blake Gentges said.

Earlier this month, Jefferson City was one of 26 teams competing in the CoMo Classic, playing at Rock Bridge, Southern Boone and Missouri’s Taylor Stadium. The Post 5 Seniors also won that tournament, posting a 5-0-1 record, with the tie coming in pool play.

“It’s nice going to those prospect tournaments and playing a good brand of baseball,” Vaughan said. “At times early in the tournament, we can sneak up on people, being a Legion team. But then word gets out pretty quick that these guys can play.”

Despite going 2-0-1 in pool play during the CoMo Classic, Jefferson City barely made it into the six-team bracket play for the final day.

“Once we got in the bracket, we knew we had a chance,” Gentges said.

Even as the No. 6 seed, the Post 5 Seniors mowed through bracket play, winning three games in one day.

“By Game 5, we’ll take our (pitching) matchup against yours every time,” Vaughan said. “And it’s nice having the bullpen options, too.”

Max Buscher has been one of the steady pitchers this summer for the Post 5 Seniors. He has a 3-0 record with two complete games and a 2.37 ERA with 12 strikeouts in 23⅔ innings.

Chase Schnieders has been valuable as both a starter and a reliever. In eighth pitching appearances, Schnieders has a 7-0 record with one save, along with a 1.81 ERA and 31 strikeouts in 27 innings.

“We’ve thrown Max the first game in every tournament, and it has been nice to have that,” Vaughan said. “Chase throws the big innings in certain spots, and it’s been very nice to have that option, too.”

Jefferson City has used eight pitchers this summer, as Nate Roark, Billy Underwood and Trevor Jordan have all pitched complete games as well.

And while the pitching has been impressive, the offense has been no slouch. The Post 5 Seniors are scoring 7.0 runs per game.

“We’re hitting the (heck) out of the ball,” said Gentges, who is third on the team with a .464 batting average from the leadoff spot. “We tend to have one really good inning and then just tack on after that.”

“It’s been very simple to make out a lineup, when you have that option of having a kid that can play anywhere and is above average on defense,” Vaughan said of Kruger.

“It’s been a little bit from all over the place,” Vaughan said. “The top half of our lineup has been pretty lethal the whole season. Gentges is dominating the top, setting up the table. Kolb has been great for us.”

The Post 5 Seniors did not play in a tournament this past weekend, as they rested for this week’s Zone Tournament. Instead, they held an intrasquad game last Thursday at the American Legion Post 5 Sports Complex.

“The key was getting to face live pitching,” Vaughan said. “Same for the pitchers, getting live at-bats. And a lot of these kids, they want to face each other. These are the matchups they want to have.”

Jefferson City has shown it is capable of winning three games in one day. However, in the Legion baseball postseason, as long as the Post 5 Seniors keep winning, they’ll only have to play once per day.

“Those days where we played three games in a row, that tells you if it does go south and we have a hiccup, that these guys are going to compete the whole time,” Vaughan said. “Every inning, this team has just attacked, attacked, attacked. If we go down, the next half inning we take the lead.

It’s been in their DNA all summer.”

The Zone Tournament championship game is scheduled for 5 p.m. Thursday. Both the winner and the runner-up will advance to the Missouri American Legion AAA State Tournament, which is July 26-28 at Liberty Park in Sedalia.

“We’re ready to win in all,” Gentges said.

Notes: The Post 5 Seniors have a team batting average of .370 this summer. As a team, Jefferson City has not struck out more than six times in any game, and Gentges has only struck out once in 21 games. … Roark is the only Post 5 Senior to hit a home run this summer. It was a grand slam in the bottom of the sixth inning, rallying Jefferson City to a 13-10 win June 25 against Post 499 Fike in the Sedalia Wood Bat Tournament. … The Post 5 Seniors have a team ERA of 2.38. Hunter Berendzen, Underwood, Roark and Jordan each have recorded two wins on the mound this summer, while Cole Peters has a save and a 0.95 ERA out of the bullpen.