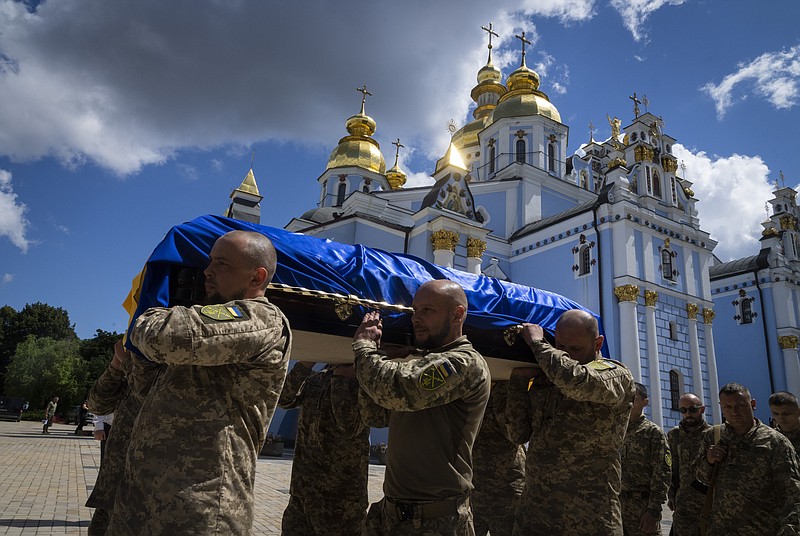 Ukrainian soldiers carry the coffin of a soldier, codename Fanat, killed by the Russian troops in a battle, during his funeral at St. Michael Cathedral on Monday, July 18, 2022, in Kyiv, Ukraine. (AP Photo/Efrem Lukatsky)

KYIV, Ukraine -- As Russia kept up its relentless shelling across the country, Ukrainian President Volodymyr Zelenskyy expanded the shakeup of his security services on Monday by suspending 28 more officials. A day earlier, he dismissed two senior officials over allegations that their agencies contained "collaborators and traitors."

In his nightly video address on Monday evening, Zelenskyy said a "personnel audit" of the Security Service of Ukraine (SBU) was underway, and the dismissal of the 28 officials was being decided.

On Sunday, he had fired SBU chief Ivan Bakanov and Prosecutor General Iryna Venediktova. Zelenskyy, citing hundreds of criminal proceedings into treason and collaboration by people within their departments and other law enforcement agencies.

"Six months into the war, we continue to uncover loads of these people in each of these agencies," said Andriy Smirnov, deputy head of Ukraine's presidential office.

Analysts said the moves are designed to strengthen Zelenskyy's control over the army and security agencies, which have been led by people appointed before the Russian invasion began on Feb. 24.

"In the conditions of a war, Zelenskyy needs leaders that are capable of tackling several tasks at the same time -- to resist Russia's intrigues within the country to create a fifth column, to be in contact and coordination with international experts, to do their actual job effectively," Volodymyr Fesenko, a political analyst with the Penta Center think tank, told The Associated Press.

Bakanov is a childhood friend and former business partner of Zelenskyy, who appointed him to head the SBU. Bakanov had come under growing criticism over security breaches since the war began.

Venediktova won international praise for her drive to gather war-crimes evidence against Russian military commanders and officials, including Russian President Vladimir Putin, over the destruction of Ukrainian cities and the killing of civilians.

U.S. State Department spokesman Ned Price, speaking to reporters in Washington, said when asked about the personnel changes that the U.S. and Kyiv were in close contact.

"The fact is that in all of our relationships, and including in this relationship, we invest not in personalities. We invest in institutions and, of course, President Zelenskyy has spoken to his rationale for making these personnel shifts," Price said.

He said Washington would continue to work with Kyiv on war-crimes investigations and information sharing. Intelligence sharing, he said, is "an important element of the assistance that we are providing to our Ukrainian partners in an effort to help them defend themselves."

Zelensky has appointed acting heads to the SBU and prosecutor's office. The first deputy head of the SBU, Vasyl Maliuk, was named acting head. Maliuk, 39, is known for efforts to fight corruption in the security agencies; his appointment was seen as part of Zelenskyy's efforts to get rid of pro-Russian staffers in the SBU.

Fesenko said discontent with Bakanov and Venediktova had been brewing for a while, and it was possible that Ukraine's Western partners pointed out the underperformance of the SBU and the prosecutor general's office to Zelenskyy.

The commander-in-chief of the Ukrainian armed forces, however, said his troops had "stabilized the situation" on the front, largely thanks to Western deliveries of technically advanced rocket systems.

"It is complex, tense, but completely controllable," Gen. Valeriy Zaluzhny wrote on Telegram after a phone call with the Chairman of the U.S. Joint Chiefs of Staff, Gen. Mark A. Milley.

"An important factor contributing to our holding our defensive lines and positions is the timely arrival of the M142 HIMARS, delivering targeted strikes against enemy command posts, ammunition and fuel depots," Zaluzhnyy said, in reference to the light multiple rocket launchers recently delivered from the U.S.

Ukraine's Emergency Service said at least six people were killed by Russian shelling Monday targeting the city of Toretsk in the Donetsk region of eastern Ukraine. Toretsk was taken briefly in the Russian invasion of 2014, but Ukrainian forces ended up taking the city back.

Donetsk governor Pavlo Kyrylenko said Russian shelling there is incessant. Four Russian strikes had been carried out on the city of Kramatorsk, he said, urging civilians to evacuate.

"We're seeing that the Russians want to sow fear and panic," Kyrylenko said in televised remarks. "The front line is moving, so civilians must leave the region and evacuate."

Nearly 1,000 civilians were evacuated to Ukraine on Monday from Russian-held territories in the northern Kharkiv region, Gov. Oleh Syniehubov said. About a third of the region remains in Russian hands after Moscow's troops overran it in April.

In Kyiv on Monday, a funeral was held at St. Michael's Golden-Domed Monastery for a Ukrainian solider killed when his car hit a land mine near Izium last week. His family couldn't bury him in their hometown in eastern Ukraine because it remains under Russian occupation.

The cathedral was packed with mourners paying their last respects to Fanat, as the soldier was known. Whenever the priest paused, the voice of the soldier's mother echoed in the church.

"We will love you forever and ever. We will miss you so much!" she cried, caressing the closed coffin. "Why do we need to live in this cursed war?"

In other developments Monday:

• Russian Defense Minister Sergei Shoigu inspected troops involved in the fighting in Ukraine and ordered the military to prioritize destruction of Ukraine's long-range missiles and artillery, according to a ministry statement. It was not immediately clear when or where the inspection took place.

• A new round of talks about the resumption of grain exports from Ukraine's Black Sea ports could take place in Turkey later this week, said Turkish Defense Minister Hulusi Akar. Turkey last week hosted a meeting between U.N. officials and military delegations from Russia, Ukraine and Turkey to discuss a U.N. plan to allow Ukraine to export grains through the Black Sea, and for Russia to be allowed to export grain and fertilizers. Some 22 million tons of grain are stuck in Ukraine because of the war.

• Ukraine says some Russian forces have been using topographical maps from 1969 as they fight in the country's east. The Ukrainian military's general staff, citing the country's internal security service, said the maps were used by Russian troops fighting around the Kharkiv but did not have buildings built since the early 1970s.