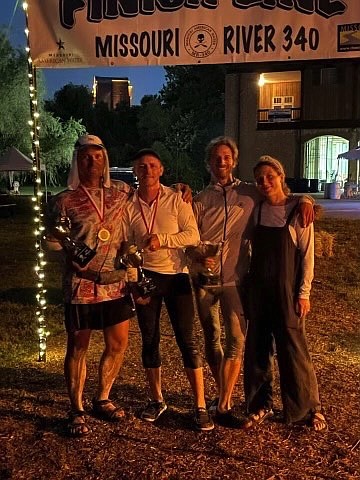 Submitted photo The crew of Team BBC (Big Black Canoe) finished third overall in this week's Missouri American MR340 race on the Missouri River. The Jefferson City residents got to the finish line in St. Charles early Thursday morning after paddling for more than 42 hours. Pictured from left to right are: crew members Tod Wilson, Matt Green and Kevin Schwartz along with their team captain and support person Samantha Schwartz.

A trio of Jefferson City residents came in third overall in this year's running of the longest non-stop river race in the world.

Team BBC (Big Black Canoe), made up of Matt Green, Tod Wilson and Kevin Schwartz, finished the Missouri American Water MR 340 just before 2:30 a.m. Thursday in St. Charles with a time of just under 421/2 hours after starting the race Tuesday morning in Kansas City.

The group was first in the team division of the race, using canoe and kayak paddles to propel their 33-foot outrigger canoe.

"We started doing this race in 2008, but this was our fourth time doing it as a group," Green said. "We're getting faster, although it's not one of our faster times. Thank God we're not getting slower. This was a really big deal for us, and we're very proud, especially when you think that over 400 crafts started this race."

The Missouri River race officially ended at 9 p.m. Friday. Solo racers are allowed 86 hours to paddle the 340 miles, while all other crafts are allowed 85 hours.

"We had a good time, and we stayed the healthiest we have ever been," Green said.

Green and Wilson are small-business owners, while Schwartz is the outdoor recreation manger for Jefferson City Parks and Recreation.

Prior to racing, the group had been doing rock climbing across the country, starting in the early 2000s. Before doing that or a race like the 340, Green said the most important thing is to be as healthy as you possibly can be.

"We did some long paddle trips before the race," Green said. "We benefited from the great weather we had this year. There was no fog and no high winds. We would have liked to have had a little faster current, which you would have if the river was a little higher."

Green agreed with others who are involved with the race that the camaraderie among the paddlers, support teams and volunteers is what makes the MR 340 so special.

"Here we are all racing against each other, but everybody helps each other out," Green said. "It's really wild how the competitors work so well together. We haven't done any other races because a lot of races we've been in before didn't have this type of atmosphere. It doesn't have it as fun as what you have in the 340."

When asked why he and his partners continue to participate in the race, Green said, "It's a vacation for the brain. You don't have to worry about anything else but just paddling. It makes life simple.

"When you have multiple people in the boat, it's all about supporting each other," Green added. "I think the team aspect is really why we do well. We're just mediocre paddlers, but because we work well together, I think that's what makes the difference."