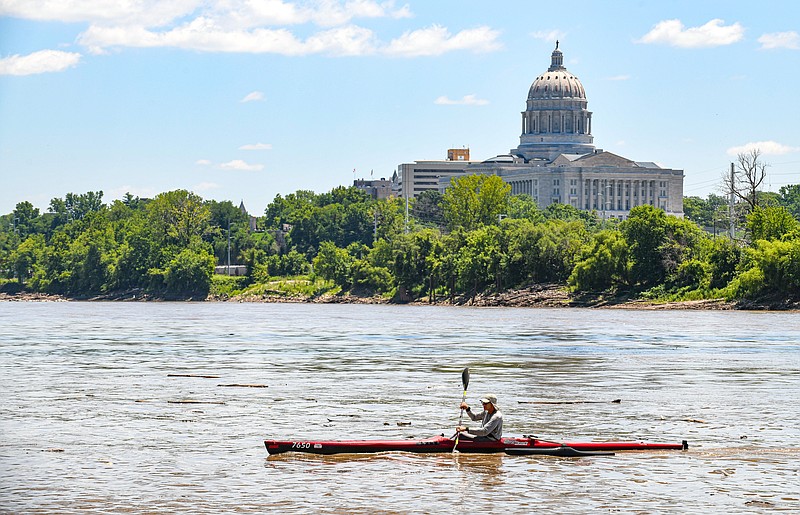 Racers participating in the longest non-stop river race in the world made their way through Jefferson City on Wednesday.

The first craft to check in Wednesday morning at Wilson's Serenity Point at the Noren Missouri River Access was piloted by Dustin LeCave, who came in at 8:23 a.m. The checkpoint is scheduled to close at 4 p.m. today.

Missouri River Relief Executive Director Steve Schnarr said LeCave was part of a group of solo racers at the front of the pack Wednesday which made for some excitement for those who follow the race. Many racers were about 100 miles behind the lead paddlers and some did have to drop out.

"It's warm, but not as hot as we expected, so we're grateful the weather has been mild, with no storms," Schnarr said. "Overall, the racers have moved through the course well."

Two-thirds of the teams usually finish the race. The record for completing the race is 33 hours. Last year's winners completed the race in 36 hours.

Race manager Christina Ruiz, who has competed in this race herself, said the course hasn't changed, but there are different challenges racers face each year because the river fluctuates.

"The height of the river determines the speed of the racers," Ruiz said. "If it's low, like it is now, paddlers don't like it. With higher water, the current is faster and that benefits the racers, especially those trying to beat records."

According to the National Weather Service, the Missouri River in Jefferson City was at 9.5 feet Wednesday. The river current is about 3 mph. Most paddlers had an average speed of seven to eight miles an hour.

"A good thing about a lower river is it make things more visible like dikes and other obstructions," Ruiz said.

LeCave was in the Hermann area as of Wednesday afternoon, and he and some of the other racers that came through Jefferson City in the morning were expected to arrive at the finish line in St. Charles by Wednesday night. To complete the race, all racers must make it to St. Charles by Friday.

"Being a non-stop race is the biggest difference from any other race that I've done," Ruiz said. "One-day races can't compare. If you want to do non-stop, you have to deal with the night navigation and that is very challenging."

Not everyone chooses to paddle all day and night.

Wednesday afternoon, racer Jed Friedrichsen of Columbia stopped in Jefferson City to, as Friedrichsen said, "Change the oil." Aided by his wife, Pat, and their daughter, Claire, Friedrichsen had some food and drink before looking to head out and continue his fifth MR 340.

Lisa Osburn, of Sedalia, and her brother-in-law, Matt Osburn, from Michigan, are the ground crew for a tandem boat called "Shut Up and Paddle," piloted by Lisa's husband, Stephen, and her daughter, Megan. This was the third race for Stephen and first for Megan. They were expected to get into Jefferson City on Wednesday night, and they hope to complete the race in 58 hours.

"He'd like to do better than his previous times (he's raced by himself the first two times), but for our daughter, we told her to just have fun," Osburn said. "We had it divided up to where they did 141 miles in their first trek, 81 miles on the second trek and 118 for the final trek."

Osburn said her husband said he'd never do the 340 again after completing his first race in 68 hours in a 12-foot kayak.

"A few months later, he said, 'I need a bigger boat,' and he did the race again," Osburn laughed. "He got his time down to 61 hours, said he wouldn't do it again. And probably five months later, he asked me if we could get a boat where both of us could go. We did a 63-mile race a few months ago, and that's when I told him, 'Honey, I'm not going to make the 340 with you.' That's when my daughter said she'd fill my spot, so I got to be back on the ground crew, which is my favorite position."

The bonding between the racers and ground crews is something that's "very special," according to Osburn.

"Everyone helps each other out," Osburn said. "If you need something, people will come up with it. It's a crazy group because you have to be a little crazy to do this."

Osburn said it's amazing how far the race has come from when the founder, Scott Mansker, who serves as race director, got the idea for it.

"He wanted to get something together to do with his buddies, and then they got the idea for this race. And it's just exploded from there," Osburn said. "There was gentlemen we met this year from Australia who heard about the race, flew in for it and borrowed a boat to compete."

The goal of the MR 340 is to bring awareness to the importance of rivers in our society. Missouri River Relief is host of the race, and the group benefits from proceeds that are raised from the race.

"Our mission is to connect people to the river, and if you want to have a healthy and sustainable river and have the best fresh water and habit, then people need to develop a relationship with the river -- experience it," Schnarr said. "The race is a perfect way to hit that mission."

"The racers, their support crews and volunteers, we spend a week together on the river, and it's a powerful experience -- for some, it's life changing," Schnarr added. "It's more than just an athletic event. People have to bring all of themselves to the table. When everyone gives their all, everyone feeds off of that, and it's inspiring for everyone involved."

In the digital edition, watch racers arrive at Wilson’s Serenity Point at the Noren Missouri River Access as Lisa Osburn, of Sedalia, talks about the bonding between the racers and ground crews and how the annual race was founded.