More than furry friends on the farm 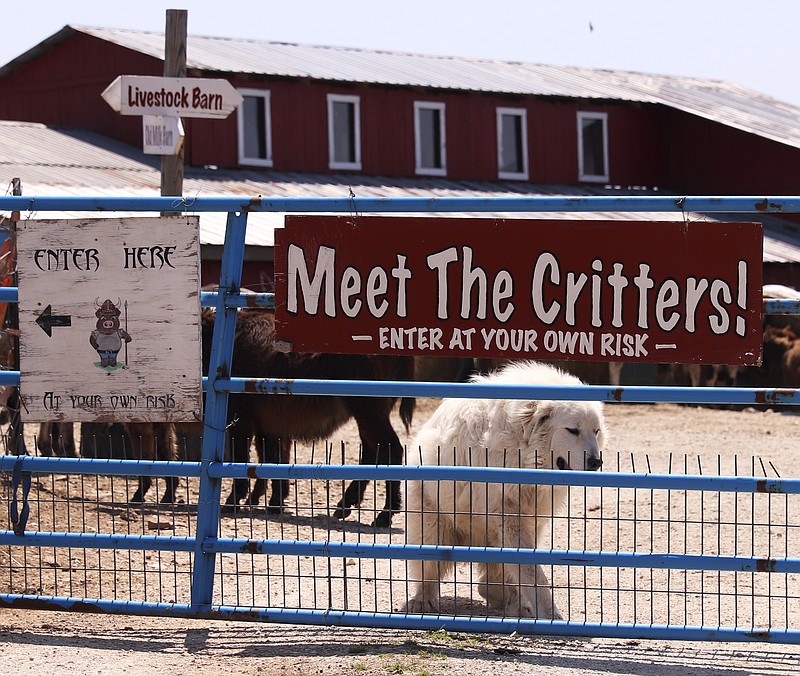 Dogs act as guardians and companions at area farms, like this canine at Where Pigs Fly farm in Linn.

If you’ve been to any farm, you’ve probably seen a stray cat or two running around the fields. While at a first glance it may seem like a coincidence - a lost fellow from the litter who made its new home among the stables - those furry little felines actually serve a tremendous value to farmers and maintaining their operation.

Farm cats are extremely valuable for pest and rodent control that, if left unmanaged, can be detrimental to crops and other animals.

For some farmers, having cats and dogs on the property have not only helped in farm maintenance but have also improved morale among its many residents.

Just off U.S. Highway 50 in Linn, Where Pigs Fly, a farm and animal rescue shelter, is visible to newcomers by its bright red barn perched atop a rolling hill.

As you near the property, an eclectic variety of honks and bleats can be heard from the many animals on the fields.

Cindy Brenneke, owner of Where Pigs Fly, works with Missourians to house almost every animal imaginable if they are in need of rescue.

“We moved to this location six years ago (and) started doing animal rescue at that time,” Brenneke said. “When we first got started, we were actually doing farm animals, wildlife and cats and dogs … now we just do farm animal rescue.”

Originally located in Owensville, Where Pigs Fly was founded by Brenneke in 2010 as a premiere location for visitors to learn and interact with farm animals.

Now, Where Pigs Fly is a 62-acre interactive farm and is home to America’s only pig museum.

From cows to peacocks, camels to hogs, Brenneke has turned her Mid-Missouri land into a sanctuary for animals. In the process, Where Pigs Fly has also drawn in many cats and dogs who now call the farm home.

“There was one year where we had actually rescued over 300 cats,” she added. “(We) had them all vaccinated, spayed and neutered and all that.”

Though Where Pigs Fly is an animal rescue, having cats and dogs on the property has been extremely valuable for the safety of the other animals and the upkeep of the property, Brenneke said.

“The dogs keep the coyotes and the foxes away,” she said. “They kind of help with the overhead predators too … my Great Pyrenees, anytime he sees a hawk or anything, he just goes spastic, and so of course with their barking and stuff, then the poultry and everybody else is paying attention to what's going on, and so that kind of helps.”

Brenneke has many different breeds of dogs including St. Bernards and Rhodesian Ridgebacks, all of which are fostered. Of the many cats at the farm, some have been fostered while others just appeared.

“The cats help with the rodent population,” she said. “Mice can cause some major damage - you've got infestation with your feed, and everything else - and then if you get rats, then you've got even bigger issues on top of that.”

Live traps for mice are also set in different areas of the farm that the cats do not have access to which are later given to them as a “treat,” Brenneke said.

“I don't know, really, of any farmers that don't have cats on the farm to help (keep) the rodent population down, except for maybe your large producer,” she said.

On the farm, animals are allowed to comingle with one another in a more non-traditional setting. While there are some areas certain animals are not allowed, having most of the animals together all the time has led to some unusual friendships, Brenneke said.

“We have some funny couples… I've got this little Pitbull who just loves the camel,” she said. “The cats and the dogs, they just sleep together and love on each other - they all love each other.”

Along with aiding in farm management, Brenneke feels that having dogs and cats interact with the other animals has helped prolong some of their lives.

“One of our dogs who's a 10-year-old Rhodesian Ridgeback, when the lady dropped him off, she said, ‘well, we raised these for years, the oldest they ever get his nine and a half, so probably won't wait much longer,’” she said. “Well, he's already over 10, and he’s healthy as can be.”

“I think that the coexisting with other animals and just the freedom that they have actually gives them a much happier, healthier life,” she added.

For more traditional farms, such as those operated by Lincoln University, having cats and dogs around is essential to production and maintaining farm animal numbers.

“There are some cats that are out at the farms … their primary role out on these farms would just be helping with rodent control around the buildings and stuff,” Boeckmann said. “The rodents are obviously really bad as far as potentially spreading disease and stuff, so the cats being around to help keep them in check and control them is really important.”

The LU farm dogs, however, play a much bigger role.

“Since Lincoln University has a lot of small ruminant animals, sheep and goats especially, one of the primary concerns with small ruminants is potential predation especially with coyotes in this area,” he said. “So, we use a lot of guard animal or guard dogs to help keep that under control.”

There are currently around eight guard dogs on all three LU farms, Boeckmann said.

“We have a combination of them (dog breeds) some of them are Great Pyrenees and Anatolian Shepherds … those are the two primary breeds we utilize here on the farms,” he said.

The Great Pyrenees is the most common guardian dog, primarily because it is a good guardian breed and is the least aggressive towards people and livestock, according to a study from the Texas A&M AgriLife Extension. Other common guard dog breeds include Anatolian Shepherds, Maremma and Akbash.

“What we'll do is we’ll buy them when they're pups ... the reason we bring them on as a pup, too, is because you have mature dogs that are here and they're fairly territorial, and so we try and bring them in when they're younger and they'll be somewhat submissive to the older dogs,” Boeckmann said.

If the dogs, especially the Great Pyrenees, interact with humans, they will often forget about their role as a guard dog, so it is important to keep that distinction, Boeckmann said.

“The guard animals will actually bond with the sheep and stay with them at all times,” he said.

LU has a rotational grazing system where the animals are moved from one pasture to another every two or three days, Boeckmann said.

“There's a lot of times that the dogs will take the lead … when it's time to move the animals they'll go and the sheep will follow,” he said. “We even see when we bring them up, if we have to work the sheep for some reason, giving them vaccinations or something like that, it can be kind of hard to sort of get the dogs off and sort them out and get them out of the way.”

“They don't like to be separate … there definitely is a bonding that takes place between those dogs and the small ruminants,” he added.

In previous years, LU has tried to use donkeys to keep predators away from ruminant animals.

“Our experience has been that the dogs probably are more effective, especially if you have a lot of pressure from the coyotes and they have good numbers around you then the dogs you seem to be a little bit more aggressive,” he said.

Once LU made the switch back to using dogs as guard animals, they have not had any trouble in maintaining their ruminant animal population, he said.

“I've been out here, and the animals can be laying underneath a shade tree, and the dogs will see something, and they'll just take off on a dead run towards something and you look … wondering what they're even seeing or hearing,” Boeckmann said. “They definitely are worth the cost of the initial cost of buying them, as well as feeding them.”