Press Box: Cardinals need to get out of current funk, and fast 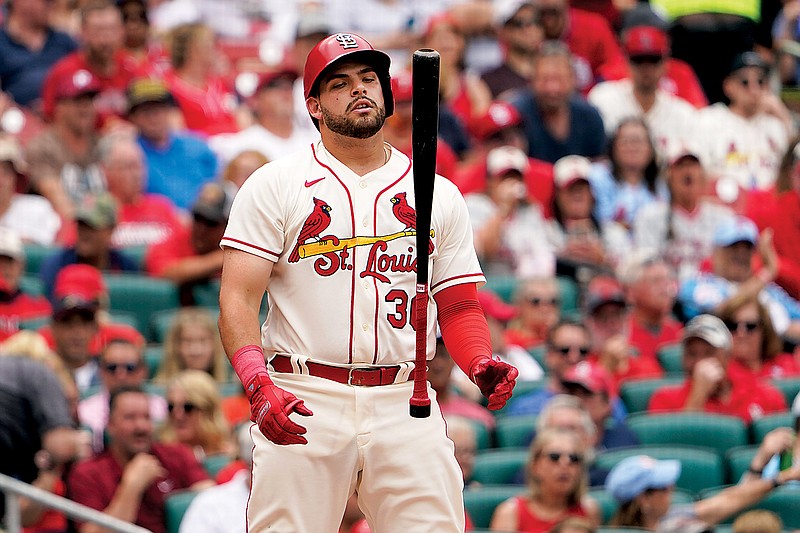 Juan Yepez of the Cardinals reacts after striking out to end the sixth inning of Saturday afternoon's game against the Phillies at Busch Stadium in St. Louis. (Associated Press)

It has not been a good week-and-a-half for the St. Louis Cardinals.

That’s sugar-coating it. Actually, it’s been a terrible week-and-a-half.

Since June 29, the Cardinals have posted a dismal 2-8 record against National League East opponents. There are still 75 games to play in the regular season, so clearly, it’s not the end of the world with a 45-42 record.

But it also isn’t exactly a reassuring stretch of baseball.

During the past 10 games, the Cardinals’ offense has scored more than three runs in only one game, a 7-6 win last Saturday against the Philadelphia Phillies in which they hit back-to-back-to-back-to-back home runs in the first inning. And yet, it took a go-ahead home run in the ninth inning from Nolan Arenado just to win that game.

St. Louis has scored just two runs per game in this span. In their other win, a 3-2 victory in 11 innings Thursday against the Atlanta Braves, the Cardinals scored a run in both the 10th and 11th innings. Each inning began with the automatic runner at second base, so I’m putting an asterisk next to those runs scored.

Yes, I’m going to pick on the offense a lot in the next few minutes, but that also doesn’t mean the pitching staff isn’t exempt from any of the blame.

In last Monday’s 6-3 loss to the Braves, Dakota Hudson gave up five runs in the second inning, making it an uphill climb for the Cardinals the rest of the way. The next night, Andre Pallante allowed five runs in the first inning.

And when the Cardinals have a strong pitching performance, like Adam Wainwright’s complete game Friday night, it still goes down in a losing effort.

Bottom line, everyone on the roster deserves his fair share of the blame.

But aside from the four consecutive home runs, the offense has been abysmal. Most recently, the Cardinals finished with a measly two hits in Saturday’s 1-0 loss to the Phillies.

Paul Goldschmidt, who was named the National League’s starting first baseman for the All-Star Game this weekend, leads the league in hitting. Arenado has had his hot streaks, which puts him high in a number of offensive categories, and Tommy Edman has become a solid leadoff hitter.

Last week, those three had the top three WAR -- Wins Above Replacement -- of any position player in the N.L. Now, the Cardinals are just three games above the .500 mark.

The blame can be pointed in a lot of directions. The Cardinals have been without Yadier Molina, Harrison Bader and Tyler O’Neill in recent weeks due to injuries. That’s a legitimate excuse. And they badly need help in the starting pitching department. The Cardinals need Steven Matz back soon, and they need him to pitch like the Steven Matz of old.

But one comment Friday night from manager Oli Marmol didn’t sit well with me.

No offense, Marmol, but that’s not a smart response to shoot back at the media when your team hasn’t scored an earned run on a hit since Tuesday.

Strangely enough, he was singing a different tune after Saturday’s loss, as the Cardinals suffered their third shutout in four games.

“Pretty frustrating,” he said. “Our ability to score runs right now is not very good.”

Four weeks ago, I was praising Marmol and saying he’s a great fit in St. Louis. But if he wants to keep having the backing of me and Cardinals fans, it’s time to start lighting a fire under some of these players.

There’s no way this team should be leading the N.L. in shutout losses with 10, and it’s not even the All-Star break.

There’s no way your 40-year-old ace pitcher should get credited with a loss when he pitches nine stellar innings.

And there’s no way an offense this good should be performing this poorly for this long of a stretch.

The good news for the Cardinals is they still have plenty of games remaining against the Chicago Cubs, the Pittsburgh Pirates and the Cincinnati Reds. However, they need to win most of those games to get back in the N.L. playoff picture.

More importantly for St. Louis, if you’re going to have a rough stretch during the season, better it come in early July than in September.