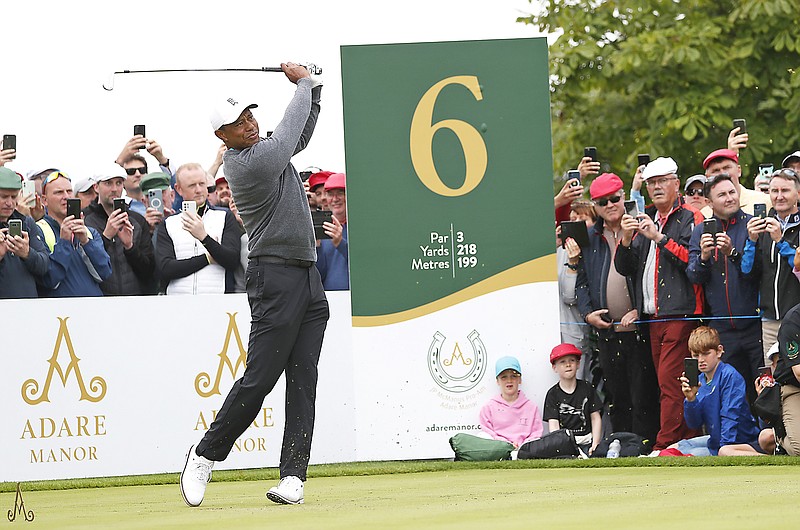 Tiger Woods tees off on the 6th hole Tuesday during the JP McManus Pro-Am at Adare Manor in Limerick, Ireland. (Associated Press)

The British Open is scheduled for Royal Liverpool, Royal Troon and Royal Portrush during the next three years. The Old Course at St. Andrews typically is used every five years.

That adds to the perspective of Tiger Woods playing this year.

When he said Tuesday “this is a pretty historic Open,” Woods just as well could have been talking about himself as the 150th anniversary of golf’s oldest championship.

“I’m lucky enough to be part of the past champions that have won there, and want to play there again, and I don’t know when they are ever going to go back while I’m still able to play at a high level,” Woods said at the J.P. McManus Pro-Am in Ireland. “I want to be able to give it at least one more run at a high level.”

Woods won in 2000 by eight shots to complete the career Grand Slam at age 24. He won again in 2005 to complete a different kind of slam. Each time Jack Nicklaus played a major for the last time, Woods won.

He is 46 and still walking gingerly at times from his right leg and ankle being pieced back together following his February 2021 car crash outside of Los Angeles.

Woods returned to play the Masters and PGA Championship, both times making the cut, though he withdrew after the third round at Southern Hills. He skipped the U.S. Open, though not necessarily by choice.

“The plan was to play the U.S. Open, but physically I was not able to do that,” Woods said at Adare Manor. “There’s no way physically I could have done that. I had some issues with my leg and it would have put this tournament in jeopardy, and so there’s no reason to do that.”

That he is even playing is remarkable considering the nature of his injuries, particularly the threat of having part of his leg amputated, which doctors were able to avoid.

He has no idea how much longer he can play, or at least compete. Woods is unlikely to tee it up after the British Open until December, either at his Hero World Challenge in the Bahamas or what has become his fifth major, the PNC Championship with son Charlie.

“If you asked me last year whether I would play golf again, all of my surgeons would have said, ‘No,’” Woods said. “Now if you say, ‘Play at a championship level,’ well, that window is definitely not as long as I would like it to be.”

Branden Grace of South Africa, coming off a $4 million prize from winning the LIV Golf event in Oregon, was among those with LIV contracts who were added to the Scottish Open field. He joins Ian Poulter, Adrian Otaegui and Justin Harding, who won a temporary stay from European tour suspensions.

As for awkward, that might be found in the group of Collin Morikawa, Matt Fitzpatrick and Will Zalatoris. It was only a few weeks ago when Zalatoris played with Fitzpatrick in the final group at Brookline and missed a 15-foot putt on the last hole to finish one behind.

The grand celebration of the 150th anniversary of the British Open coincides with a dispute between ScotRail and ASLEF, the union for train drivers.

As a result, the R&A has contacted ticket holders to advise they travel to the Old Course by road or alternative public transport. Nearly 300,000 spectators are expect for the British Open next week.

ScotRail has limited service because of the dispute. It said trains between Edinburgh, Dundee and Aberdeen to Leuchars -- the closest station to St. Andrews -- would run every hour on tournament days.

The R&A said it will increase capacity at park-and-ride facilities to cope with more cars. Travel time to the Old Course is likely to take a lot longer.

“Due to circumstances out of our control, we have no choice but to urge fans to not travel by rail to The Open and to use alternative means of transport to get to and from St. Andrews next week,” said Johnnie Cole-Hamilton, executive director of championship at the R&A. “There is a risk that fans who travel by train may find there are no services to get them home.”

Ryder Cup captain Zach Johnson illustrated why it will be difficult for Brooks Koepka, Dustin Johnson, Bryson DeChambeau -- yes, even Talor Gooch -- to be on the U.S. team a year from September in Italy.

Johnson said last week at the John Deere Classic that to be one of six qualifiers or be considered for a captain’s pick, players must earn Ryder Cup points through the PGA of America, which requires being a PGA member.

“The way that we’re members of the PGA of America is through the PGA Tour. I’ll let you connect the dots from there,” Johnson said.

There’s another way to look at it. One of the genius moves of Paul Azinger -- the real “Captain America” when it comes to the Ryder Cup -- was for the PGA of America to change its points system for 2008 so it was based on PGA Tour earnings. Players can’t get official PGA Tour money if the tour has suspended them for joining LIV Golf.

As for captain’s picks, the Ryder Cup is now a competition between the PGA Tour and European tour. It’s hard to fathom why a captain would want someone who is part of neither.

Brooks Koepka isn’t the only player to change his opinion, just the quickest.

Paul Casey stood his moral ground in 2019 when he turned down the Saudi International. He was a UNICEF ambassador at the time, and Casey told the U.K.-based Independent he would be a hypocrite to sign a deal and get paid to play.

“Anybody who says sport isn’t political, that’s rubbish. Sport is very political,” he said in March 2019. “I’m glad I took a stance, more so if it highlights the issues within the region.”

Two years later, he was part of the Saudi International field, saying he was “open-minded and willing to learn,” that sport can lead to change and he had listened to the event’s commitment to change and its vision for the future.

And now he is the latest to sign up for Saudi-funded LIV Golf league. His first LIV event will be at Trump National in Bedminster, N.J., at the end of the month.

That gives LIV Golf another player in his mid-40s.

Divots: Nelly and Jessica Korda are among those playing in the Aramco Team Series-Sotogrande next month on the Ladies European Tour. It will be their first time playing in Spain. Both played in the Aramco series in New York last year. … J.T. Poston was the first wire-to-wire winner of the John Deere Classic since David Frost in 1992. … The final four spots in the British Open are up for grabs this week -- three from the Scottish Open, one from the Barbasol Championship. That would bring the field to 154 players. The top two from the alternate list -- this week’s world rankings -- are Sahith Theegala and Alex Noren. … J.T. Poston was No. 99 in the world when he won the John Deere Classic, ending a stretch of six consecutive PGA Tour winners from the top 20.