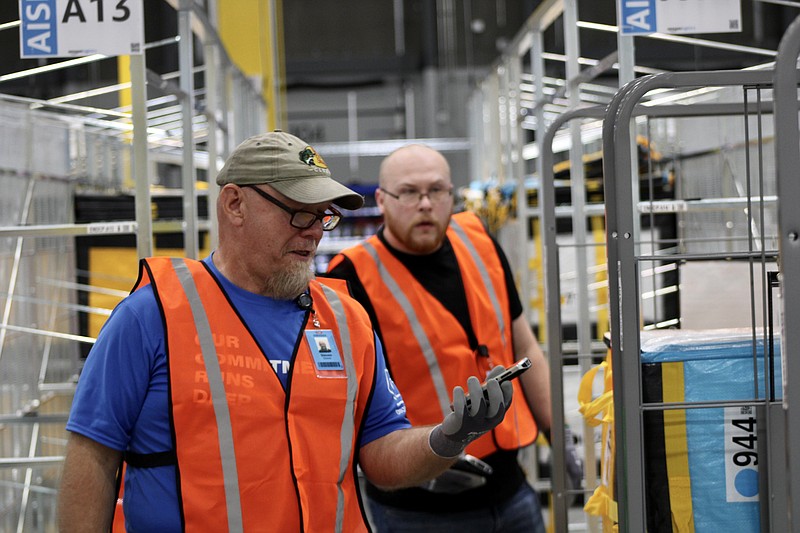 E-commerce giant Amazon just expanded its presence with a new facility in Ashland, and Jefferson City residents are on hand to help steer the new site.

The new delivery station, located near Columbia Regional Airport, spans more than 47,000 square feet -- just under the size of a full football field.

These stations are known as the final stop for Amazon packages before they are delivered to a customer's doorstep: Packages are sorted by employees and loaded onto the vans, and drivers then head out for their deliveries.

Operations Manager Bruce Bax, a Lincoln University graduate who still lives in the Capital City, has overseen the training and launch of the new delivery station, a first for the Mid- Missouri area. He said the location was chosen based on the company's analysis of data from the area, which found the optimal location for a delivery station was between Jefferson City and Columbia.

Bax said he jumped at the opportunity for the chance to take a leadership role at the new facility and help bring new jobs to his home.

"I'm very excited about the opportunity to serve the community, my friends around the area," Bax told reporters during a media walk-through Thursday morning. "I'm just proud to be a part of this kind of historic site coming in for Amazon in this area."

"We're creating a lot of good jobs at this facility, not only with Amazon under the roof but as far as our drivers and independent business owners with their fleet and their drivers that they have," he added. "Then the flex drivers and the contractors that we have bring quite a few jobs to the area."

Employees working within the building go through a three-day classroom and safety training process, Bax said, and once they're comfortable, new members of the team are assigned shifts.

Drivers are hired and managed by Ida Rosser, owner of local Amazon Delivery Service Partner company IP Focus Logistics. Rosser, who has lived in Jefferson City for two decades, said she was excited about the opportunity to get packages to her friends and neighbors faster while taking on a partnership with the tech juggernaut.

"This is a dream for me. I could not have imagined being in partnership with Amazon," she said. "This is huge. When I heard about Amazon coming to Ashland, I started doing research on how to be a part of this."

She said there were currently 15 vans taking 10 routes a day, but she expected it to expand to 20 or 30 routes with two drivers per route.

The facility is the first of its kind to be located in Mid-Missouri, complementing existing facilities across the state. It opened June 9 -- a little more than a month ahead of Prime Day, an annual series of heavy discounts slated for July 12-13 -- and has brought on 30 employees thus far. It is expected to add around 100 on-site jobs in addition to 20 delivery service drivers and 25 "flex" drivers -- who drive their own vehicles on the job as independent contractors -- though those numbers are expected to grow as the site hires more employees.

The facility will serve a radius of more than 50 miles from Boonville to Fulton and Jefferson City to Centralia, an area that typically sees around 15,000 orders fulfilled on a daily basis. Bax said the goal was to be able to handle closer to 20,000 a day by September ahead of the heightened demand that comes with the holiday season.

The site features 400 feet of conveyors to help meet the high demand, as well as 240 carts used to deliver packages to delivery vans.

In addition to equipment, the new facility includes amenities for its employees. While Amazon workers get comprehensive benefits beginning the day they start, a $15 minimum wage and the potential for investments into workers' education by the company, according to an Amazon fact sheet, the site itself includes a small "Driver Snack Shack" that offers food and drinks, as well as small fans and cooling towels during hot summer days.

Amidst the shining floors and metal carts and shelves, there are also a few wooden desks with computer setups, a staple in these facilities its managers called "a piece of Amazon lore."

The wooden desks pay tribute to a similar desk Amazon founder Jeff Bezos is said to have made from a door when the company was in its early days, a cheaper alternative to the real thing. The company still peppers modern versions of the desk around its locations as a symbol of innovation and a reminder of the behemoth company's humble beginnings.

Amazon has 20 facilities in the Show-Me State so far, according to the company, creating more than 10,000 jobs. These sites include fulfillment and sorting centers in Berkeley, Republic, Hazelwood and St. Peters, four Whole Foods Markets in the St. Louis and Kansas City regions, and 10 delivery stations.

More than 24,500 small- and medium-sized independent businesses are also growing their operations through Amazon tools. In all, the company said it has contributed billions to the state through infrastructure and investments. 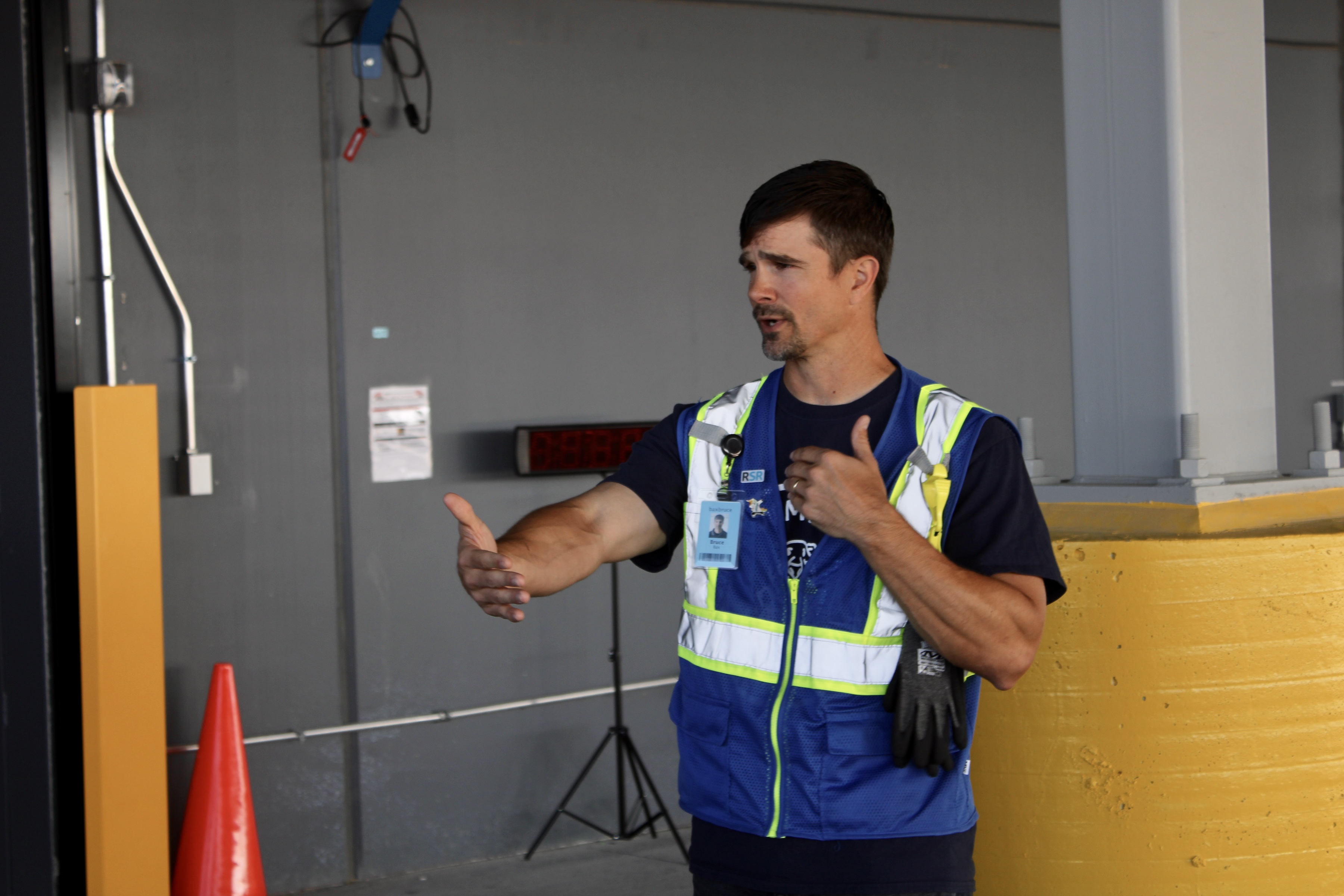 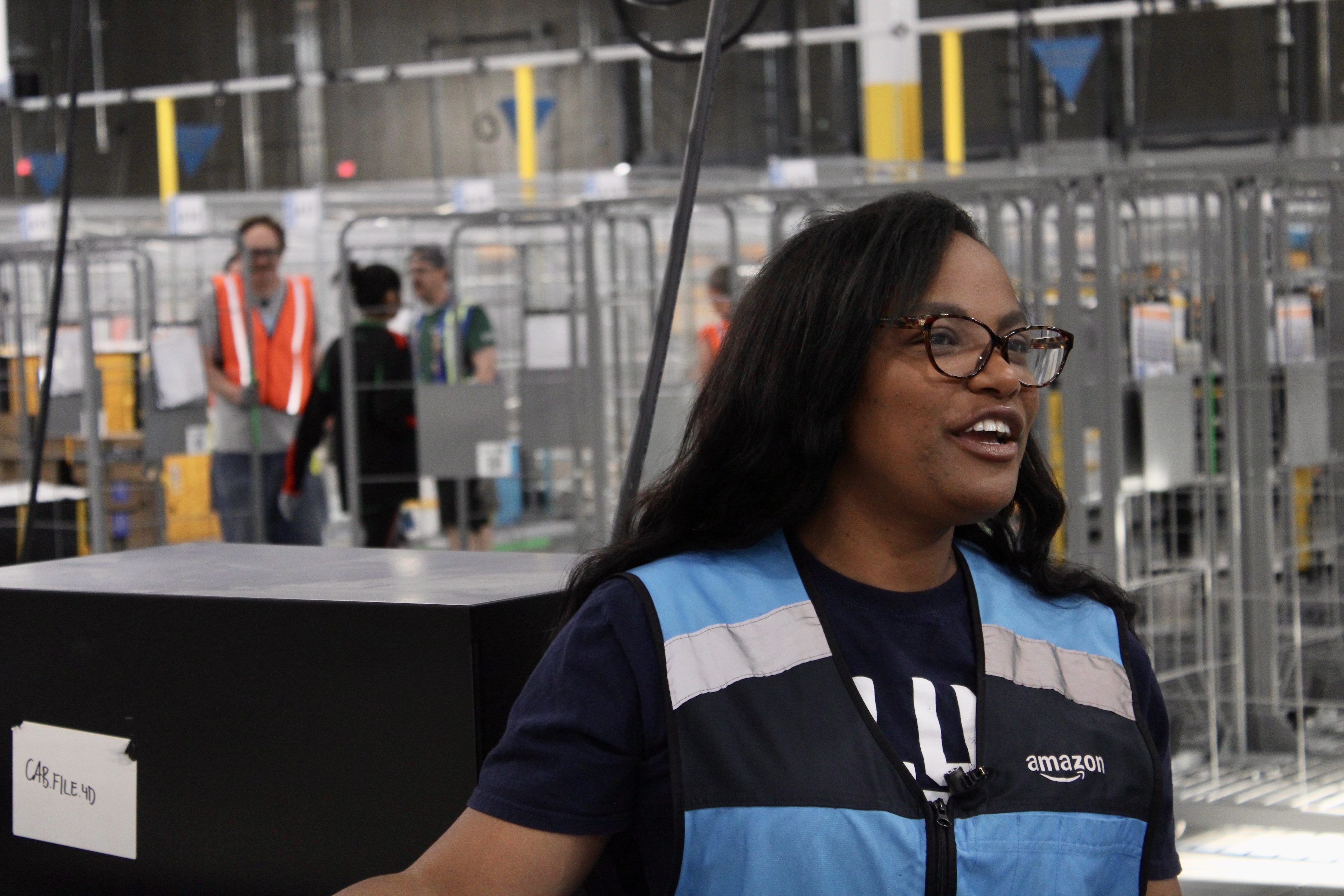 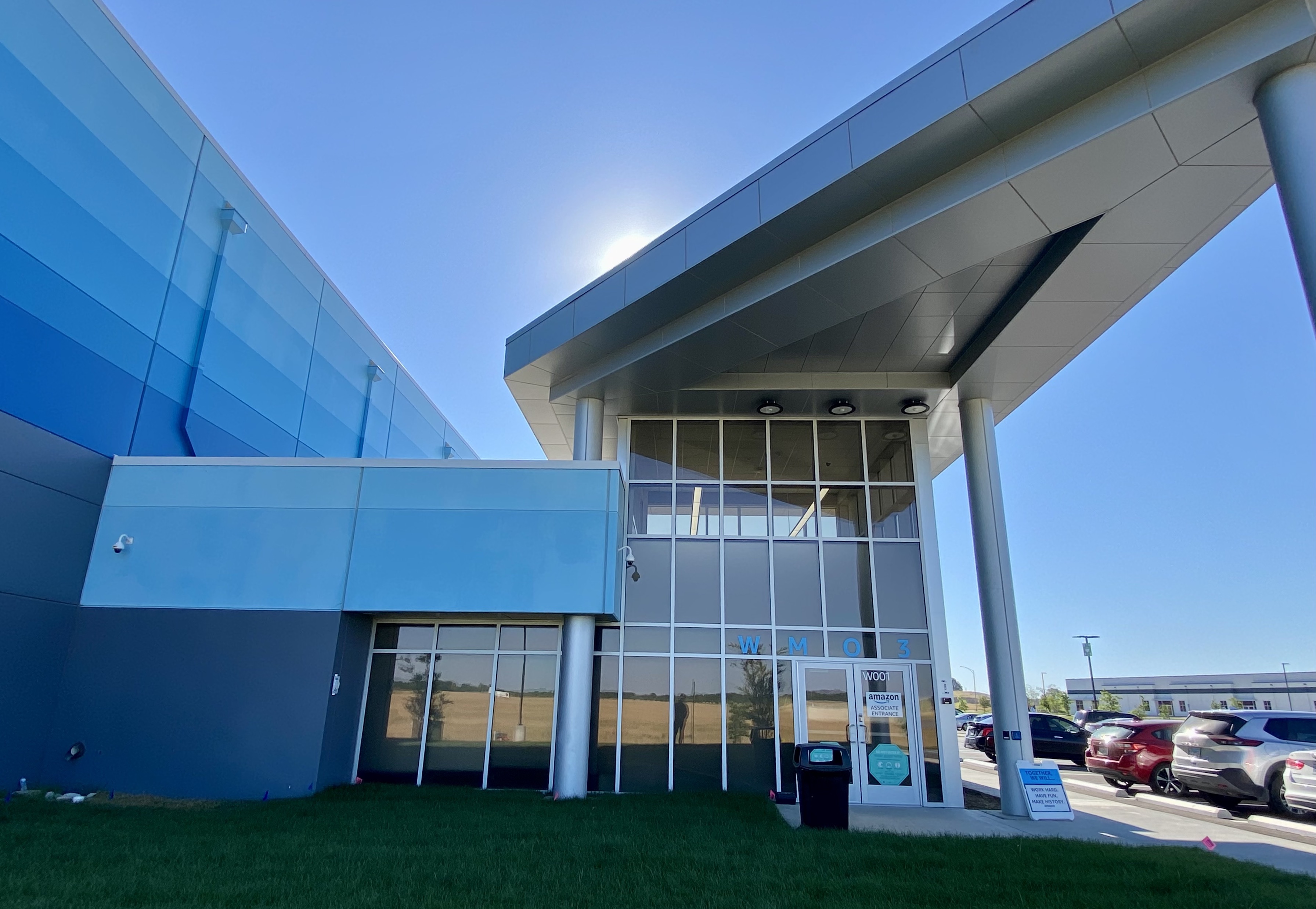 Cameron Gerber/News Tribune The new Amazon Delivery Station in Ashland spans more than 47,000 square feet and is expected to employ a hundred workers. 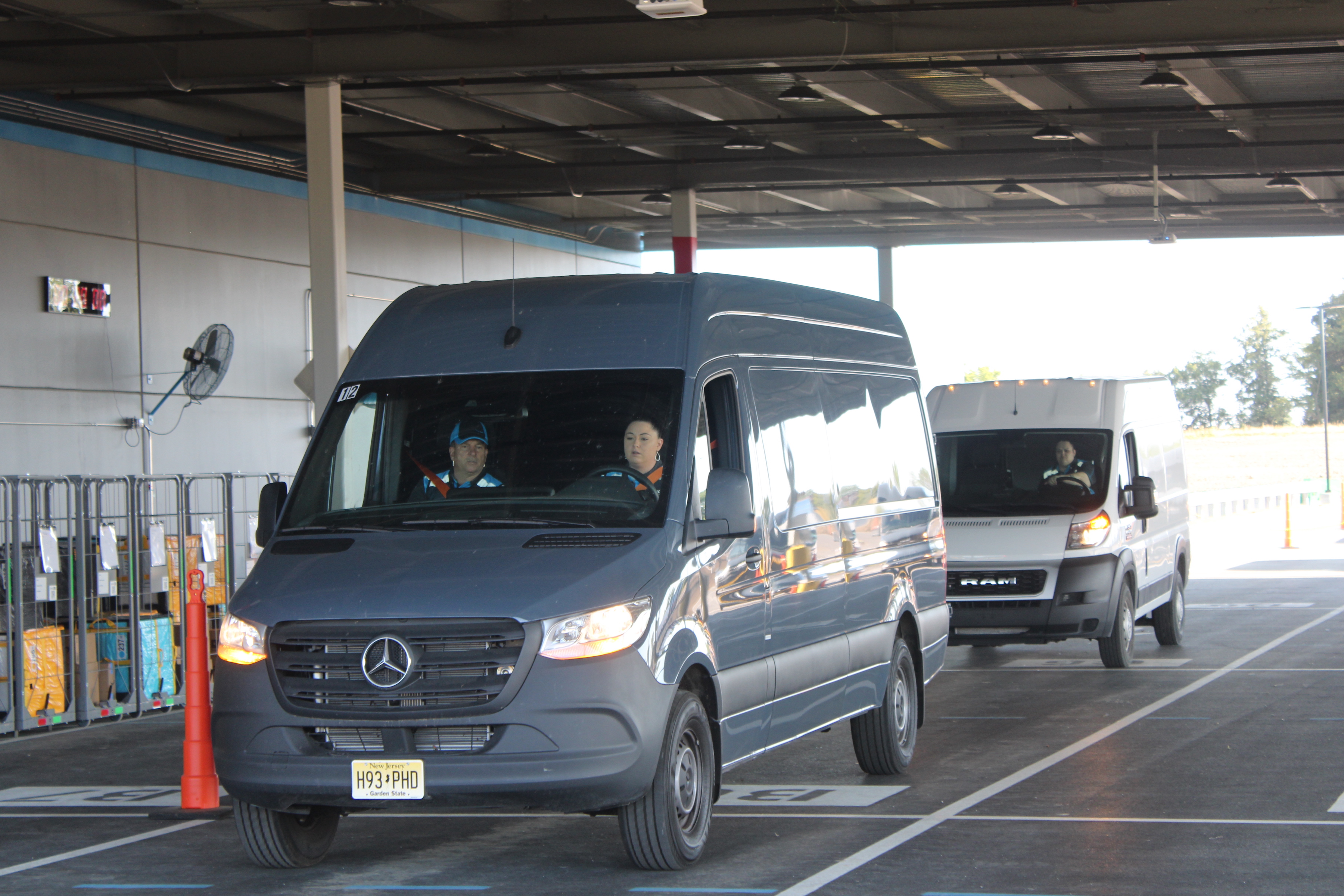