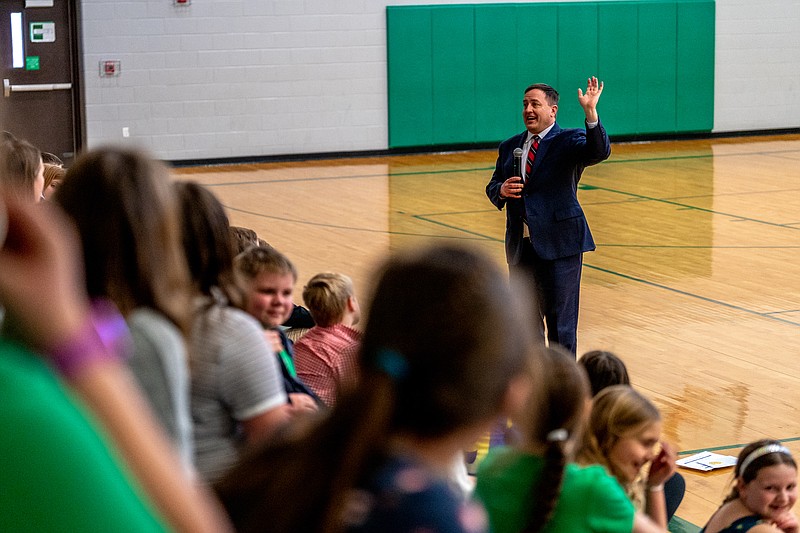 Blair Oaks fifth-graders learned about civics and how to be a good citizen Friday during a visit from Missouri Secretary of State Jay Ashcroft.

Ashcroft, a Jefferson City native, spoke on the three branches of government, the role of the secretary of state’s office, the importance of voting and the need for good citizens.

“We all owe a debt to people we will never know that lived as good citizens, that lived as people of honesty and integrity, so that we could live and … be prosperous in this great country,” he said.

Ashcroft gave students a “pledge of respect” to sign. It reads: “I pledge to my family, friends and community to be a good student, a good citizen, to be kind and treat others with respect; to be a good friend, a good leader; and to be courageous in difficult times.”

Ashcroft quizzed the students on their knowledge of government and democracy, and took questions on his own experiences as secretary of state.

Ashcroft also encouraged the students to keep going and not give up. He told the story of his failed run for state Senate, in which he said he was “humiliated.”

“And the reason I bring that up is, if I had let that failure stop me, I wouldn’t be the secretary of state now. And I hope that you can learn from that,” he said.

Ashcroft said he hopes the students know that they need to get involved.

“I hope they understand that for us to have good government we need citizen participation,” he said.

When asked why he came out, Ashcroft said he speaks to students because he’s looking to the future.

“I like to come out and talk to school students to make sure they understand how our government works and how it’s designed and to talk about citizenship. As an elected official, sometimes it’s easy to think it’s all about us, but really it’s supposed to be about the people,” he said. He said he likes talking to students because he knows they will be the leaders of the next generation.