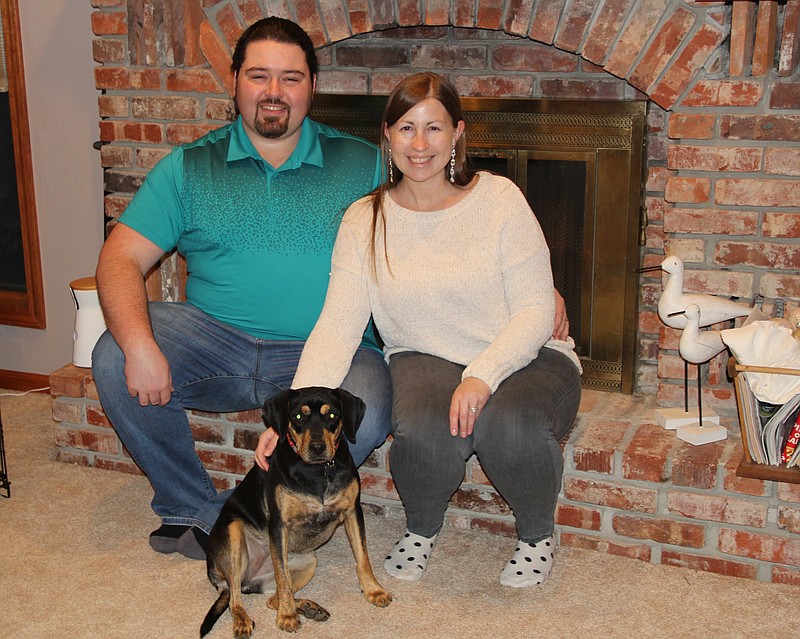 Planning a wedding is hectic.

Buying your first house — and moving in with your new fiancé for the first time — is hectic.

Doing it all during a global pandemic is … very intense.

James and Whitney got engaged in June 2020, which set off a whirlwind of events leading to the Scurlocks’ Nov. 6, 2021, wedding.

“It turned into, ‘Let’s make a ton of really big decisions all whilst in the midst of a shutdown,’” Whitney said with a slight sigh of relief, the chaos of the year now behind them.

The origins of the Scurlocks’ year of new beginnings date back to a 2015 Yellowcard concert at the Blue Note in Columbia.

They first met as members of the Jefferson City Rotaract Club, a now-disbanded social group of young professionals. James is a data analyst with the Public School and Education Employee Retirement Systems of Missouri, and Whitney was recently promoted to be the adviser to Chairman Ryan Silvey of the Missouri Public Service Commission.

“At the time, I thought to myself, ‘Whitney is super cool, but she’s totally out of my league. I’m still going get to know her,’” said James, now 30, who was new to town and looking to make friends.

“We kept kind of crossing paths at different events, and we’d chat and then just keep talking,” she said. “I specifically remember one night where we talked about classic Nintendo games and Nickelodeon for about two hours. … I went home that night and thought ‘I barely talked to anyone else, and I’m OK with that.’”

She kept expecting the funny, cool guy she felt so comfortable with to ask her out.

So the next time she saw him, she decided, as a modern woman, she would ask him out, but it was too late. He was dating someone else by then.

They stayed friends; she dated other people, too. And, both lovers of live music, they eventually made plans to go to a concert together as friends.

By the time the concert rolled around, they were both single again. And after the band gave its final encore, James had asked to cook her dinner.

They’ve been together ever since.

Five years to the day of that first date, they were staying in to celebrate. After all, a pandemic was raging in June 2020 with most restaurants not open for dine-in. They cooked steaks at James’ apartment, and once the smoked cleared from Whitney’s attempt at cooking in a cast-iron pan, James presented her with a large box. She expected it to be a bike helmet; the active couple are avid trail-runners and had recently took up bicycling.

Inside the large box, though, was a much smaller one.

“I went on two- or three-minute rant about all the reasons I love this woman,” James said. “She cried; I cried. When I asked her to marry me, her first question was, ‘Is this happening?’”

They had certainly talked about marriage. Whitney had been wanting it for a few years; she’d even gone to a few bridal expos and had started planning the big day before the ring.

“Once everything was going on with the pandemic and we were working from home, I kind of just wasn’t thinking about it anymore. I wasn’t necessarily expecting it at that point so there was something kind of funny about when he actually did propose,” Whitney said, remembering the utter shock she felt in that moment.

“We spent like the first 30 minutes of being engaged just going on about how much we cared about each other. We were both tearing up, and it was just really sweet,” she added.

Once the tears dried, James and Whitney got to work.

Within a matter of weeks, they’d secured a real estate agent and started the process of looking at houses.

“By the time we met, both of us had been in our jobs for several years, and they’re career jobs,” Whitney said, noting she wanted to buy a house rather than one of them moving into the other’s rented apartment.

“We were emailing with the event contacts (for the wedding) at the same time we were emailing our Realtor about houses, and so it got to the point where it was just nuts,” she said. “From August through October, it was just crazy.”

They moved into their Jefferson City home in September 2020 and adopted their rescue dog, Bailey, in December that year. All the while, they were planning the wedding, working from home and adjusting to engaged life.

“There’s good days and bad, but we’ve been together over six years at this stage, so when one’s having a rough day, the other picks up the slack,” James said. “It’s just a given; we recognize and be there for each other.”

The stress was worth it. The Scurlocks succeeded in their mission to throw an epic party to celebrate their wedding.

After a simple ceremony at the chapel on Stephens College campus in Columbia, a party raged at the place it all began: The Blue Note.

“‘Now introducing Mr. and Mrs. Scurlock,’” James recalled the DJ announcing as they entered the reception. “These (6-foot sparkler volcanoes) go off, and ‘One Night Only’ by the Struts starts blasting. We’re just living our rock star lives. It was amazing.”

The party was complete with a performance by the Kay Brothers, scratcher tickets thrown into the crowd (in place of the garter toss), signature cocktails and a mini Bailey figurine on the side of the cake.

“Don’t underestimate wedding planning; it’s crazy,” Whitney said. “We don’t regret it. The whole point of it was we really wanted to have all our family and friends in this one place for this one day, and it was absolutely spectacular.”

Now that the year of big decisions has passed, the newlyweds are settling in to married life.

In some ways, not much has changed, they said.

“We’ve been together for six years at this point, and not to besmirch the glory that is a wedding,” James said, “but we’ve had a long relationship and a piece of paper doesn’t really change much. I still love this woman.”

For the Scurlocks, one of the keys to their happiness is maintaining their individuality. They both love to travel — usually together but sometimes with just friends. Whitney is involved in numerous community groups, and James gets together with a group of friends regularly to play video games.

“We kind of know to go and give each other space and do our own things,” she said, and it gives them something new to talk about when they’re together.

James added, having dated for a while, they had time to work through some of the hiccups in the relationship before moving in together and getting married. Though, it’s still a learning experience — they sometimes bicker about James dropping dirty clothes next to instead of in the hamper or Whitney leaving half-empty beverages scattered around the house.

“If you’re in a committed relationship, keep in mind this is a person for whatever reason you’ve decided you deeply care about, and this little thing that is causing you to have a bad moment, a bad day, a bad week is not going to matter in the grand scheme of things,” he said. “This is the person you care about; they are priority number 1.”

James ended with a piece of advice for new couples considering taking that next step in the relationship:

“Every couple should paddle at least 8 miles in a canoe together. That will test a relationship, especially a new relationship, very easily.

“Inevitably, like in life, you’re going to tip at least once, and how you handle that says a lot about your relationship. Do you go on, or does one of you walk 3 miles through the woods back to the road?”

After paddling in circles for a bit, James and Whitney went on.