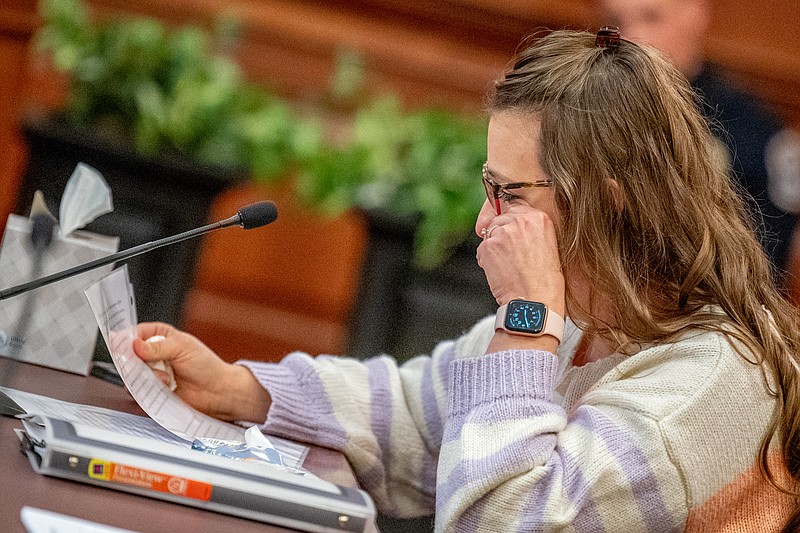 Rose Ridnour wipes away a tear as she speaks in favor of state Sen. Mike Bernskoetter’s bill on Tuesday, Jan. 18, 2022, at the Missouri State Capitol in Jefferson City, Mo. (Ethan Weston/News Tribune photo)

A state lawmaker is attempting to deny the option of parole for juveniles who commit  second-degree murder — an issue opponents said the United States Supreme Court has already decided.

Moved by a Jefferson City murder over a decade ago, Missouri Sen. Mike Bernskoetter,  R-Jefferson City, is sponsoring Senate Bill 664, which would eliminate a juvenile’s eligibility for parole if found guilty of second-degree murder.

An individual can be charged with second- degree murder for knowingly causing the death of someone else or purposely causing serious injury that results in death.

The charge is less severe than first-degree murder, which is a premeditated, intentional killing, but more serious than voluntary manslaughter, which is typically considered a “heat of passion” murder.

Second-degree murder is a Class A felony, which is the highest level of felony in the state. Sentences are based on the circumstances of the crime and can range 10-30 years or life in prison.

In effect, Bernskoetter’s legislation would broaden the scope of those restrictions to also include people sentenced for second-degree murder.

It also reverses a change the state Legislature made last session in an omnibus sentencing bill Gov. Mike Parson signed into law.

“It has been the discretion of prosecutors to bargain down convictions to murder two when the facts of the case should support a conviction for first-degree murder or capital murder — this has been done in good faith over the years with prosecutors and victims agreeing to lesser sentences that still include significant jail time,” Bernskoetter said. “When the current law was changed, it effectively resulted in the rug being pulled out from underneath victims and their families.”

Bernskoetter presented his bill Jan. 18 to the Senate Judiciary and Civil and Criminal Jurisprudence Committee.

Sen. Tony Luetkemeyer, a Parkville Republican and chairman of the Senate Judiciary and Civil and Criminal Jurisprudence Committee, said second-degree murder was dropped from the statute dictating parole restrictions by the House.

“I think it was probably just missed as part of that process at the end of session,” Luetkemeyer said.

He also said the local case involving Alyssa Bustamante, a then-15-year-old girl who killed her 9-year-old neighbor, Elizabeth Olten, in 2009 helped drive him to sponsor the legislation.

Bustamante told investigators she committed the murder because she wanted to know what it felt like to kill someone. She detailed the murder in her diary and called it “ahmazing.”

Bustamante was charged with first-degree murder but took a plea deal and was convicted of second-degree murder with the possibility of parole. She was given a life sentence in 2012, which will be followed by a 30-year sentence for armed criminal action.

With the way the law is currently written, Bustamante could be eligible for parole on the murder charge as early as 2027.

“Some people just don’t deserve to be paroled,” Bernskoetter said. “When you do something like that, sometimes they can’t be rehabilitated, and I think that’s one of those situations.”

Gary Bemboom, Elizabeth Olten’s father, testified in support of Bernskoetter’s bill and said he has been notified that a parole hearing will be set for Bustamante.

“I’m asking that you rewrite the bill or pass this new bill that Sen. Bernskoetter has to keep Elizabeth’s killer in prison where she belongs,” Bemboom testified to the committee. “As a dad, I feel I didn’t do my job to protect Elizabeth. I’m asking you, for Elizabeth, make sure her killer serves her prison term so she doesn’t do this again.”

Bemboom wasn’t the only local person to testify in support of Bernskoetter’s bill.

Jeff Kammerich said second-degree murder shouldn’t be eligible for parole because having violent offenders behind bars brings peace of mind to victims and their families.

Kammerich’s brother was shot and killed outside of his Jefferson City home by a juvenile in 2018. After being released on bond, Kammerich said the juvenile shot and killed a pregnant woman within a week.

“It’s like a never-ending process of suffering,” Kammerich said. “Be it the bills, be it the appeals and all that, and all we want at the end of the day is justice and to protect others from the same situation.”

Rose Ridnour also testified in support of the bill. Ridnour’s mother was shot and killed while working at a gas station in 1989 on Missouri Boulevard.

The juvenile who committed the murder was charged with second-degree murder, among several other charges, and given a 107-year sentence. He was released earlier this month after serving 32 years of the 107-year sentence.

“When did Missouri stop holding criminals accountable for their crimes and start looking for ways to release the offenders that have committed some of the worst crimes?” Ridnour asked.

The state’s removal of parole opportunities for youth could face legal challenges, however.

In 2012, the United States Supreme Court struck down mandatory life sentences without parole for children younger than 18 with its ruling in Miller v. Alabama.

In response, the Missouri Legislature in 2016 changed state statute to allow offenders sentenced to mandatory life in prison without parole to request a sentence review from the parole board after serving 25 years.

Nimrod Chapel, president of the Missouri chapter of the National Association for the Advancement of Colored People, testified in opposition to Bernskoetter’s bill, noting the Supreme Court has already ruled on the issue and citing evidence to suggest incarceration without rehabilitation is an ineffective system.

“We understand full well the ramifications of locking people up and throwing away the key,” Chapel said. “We know that it is not a preventative measure. What you end up doing is creating larger groups of incarcerated people that ultimately taxpayers have to somehow support.”

Chapel said the criminal justice system already has options for handling mistakes made by prosecutors, judges and juries, and Bernskoetter’s bill is attempting to address an issue that has already been settled.

Amy Breihan, co-director of the Roderick & Solange MacArthur Justice Center Missouri office, said the Supreme Court has upheld a string of cases based on the idea that children are less culpable than adults, even when committing serious crime, because their brains aren’t fully developed.

The Roderick & Solange MacArthur Justice Center is a civil rights, nonprofit law firm with a Missouri office located in St. Louis. Breihan didn’t testify in support or opposition, but for informational purposes only.

She said children’s lack of development means they are less deterred by punishment, more vulnerable to peer, familial or situational pressure, and their personalities less fixed, which means there’s a greater possibility for rehabilitation.

“These individuals are very low risk to re-offend,” Breihan said. “Crime drops pretty significantly when someone is in their 30s and 40s — in other words, people age out of crime,” she said.

Bernskoetter’s bill would prevent the possibility of parole for 175 juveniles in prison, Breihan said, costing Missourians more than $3.8 million to keep them in prison.

“I don’t think the cost to incarceration should be a factor, especially when some of these people don’t deserve to be out on our streets,” Bernskoetter said. 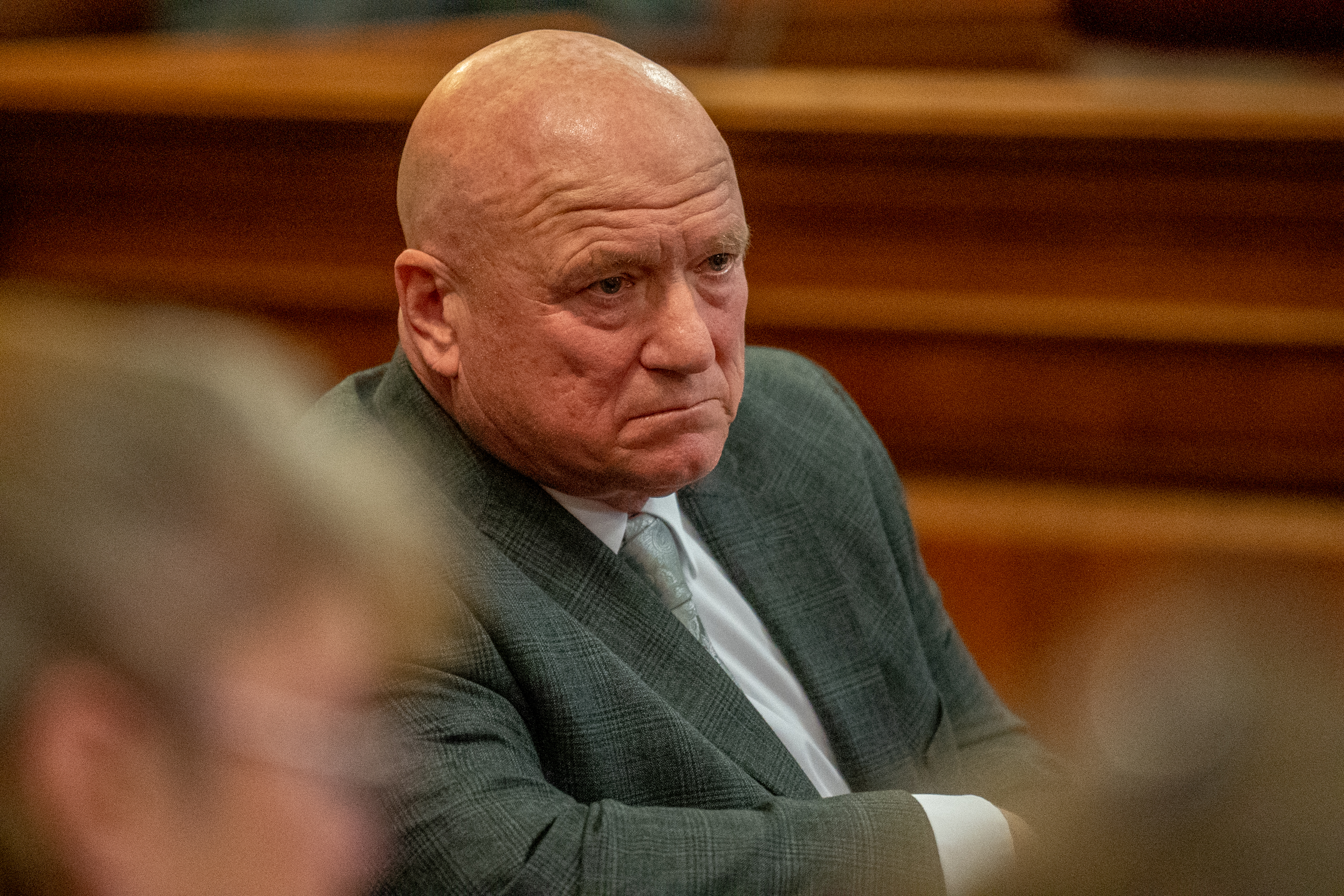 State Sen. Mike Bernskoetter listens to a witness speak in favor of his bill, SB 664, on Tuesday, Jan. 18, 2022 at the Missouri State Capitol in Jefferson City, Mo. The bill would make it impossible for people found guilty of second degree murder to get parole.