Press Box: Bonds, Clemens won’t get Hall call, but they should 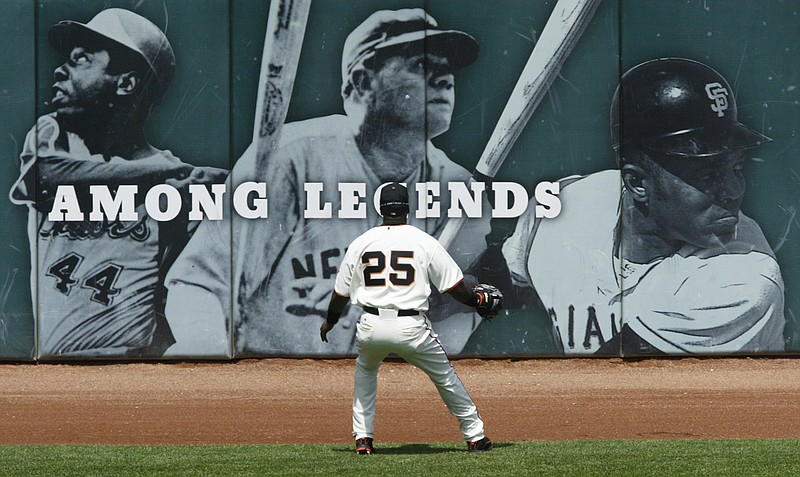 In this May 14, 2006, file photo, Giants outfielder Barry Bonds watches as a home run hit by the Dodgers' Jeff Kent goes over the wall as he stands in front of a sign that bears the photos of (from left) Hank Aaron, Babe Ruth and Willie Mays during a game at AT&T Park in San Francisco. (Associated Press)

Major League Baseball will be back in the news this week, but it’s not the news you’re hoping to hear.

The lockout will continue, but the Baseball Writers’ Association of America will announce Tuesday night if there will be any additional inductees to the Baseball Hall of Fame Class of 2022.

The Eras Committee already voted Gil Hodges, Jim Kaat, Minnie Miñoso, Tony Oliva, Bud Fowler and Buck O’Neil -- finally, at long last! -- into the Hall of Fame last month, so it will already be a busy Sunday afternoon in July at Cooperstown, N.Y.

Normally, I enjoy the anticipation leading up to the Hall of Fame announcement. This year, not so much.

Spoiler alert: They’re not getting inducted this year.

Thanks to Ryan Thibodaux, who has been collecting Hall of Fame ballots from voters for the past several years, we’re already able to get a sneak peek at where Hall of Fame candidates stand prior to Tuesday’s announcement.

As of Saturday night, Thibodaux had collected 176 ballots, or an estimated 44.9 percent of the vote. At this time, David Ortiz has accumulated 83.5 percent of “yes” votes, followed by Bonds at 77.3 percent and Clemens at 76.1 percent.

A player needs 75 percent of the vote to gain entry into the Hall of Fame. As of Saturday night, the next highest player is Scott Rolen at 69.9 percent.

That percentage is somewhat promising for Ortiz, but it’s far from a lock to make him a first-ballot Hall of Famer.

As for Bonds and Clemens, they may be hovering above the 75-percent mark, but their chances of gaining entry to the Hall of Fame are slim and none.

I can say that with certainty for one reason. In years past, the trend is writers who vote for Bonds and Clemens tend to release their ballot ahead of the Hall of Fame announcement, while those who do not check the boxes next to their names most likely choose not to reveal their ballots early.

Bonds and Clemens are two of the 10 greatest players in Major League Baseball history. I don’t care about what order you rank them, but it’s unsightly to leave them out of your top 10.

Bonds won seven MVP awards, more than anyone else. Clemens won seven Cy Young Awards, more than anyone else. But their link to performance-enhancing drugs, particularly within the Mitchell Report, has caused writers to not vote those two superstars into the Hall of Fame, as “integrity” and “character” are among the criteria for the BBWAA Hall of Fame voting.

Clemens and Bonds drew less than 40 percent of the vote in Year 1, but when inactive writers were disallowed to vote starting in 2016, their numbers began to climb, each reaching 61 percent last year.

If I had a Hall of Fame vote, I would say “yes” for both Bonds and Clemens — and for that matter, I would have voted for Mark McGwire, Sammy Sosa, Manny Ramirez and Alex Rodriguez, too. And here’s why.

Although I don’t have proof, I’m 99 percent sure there is at least one player already in the Hall of Fame who took PEDs, perhaps even steroids. I don’t know who, but it’s just a gut feeling.

If you let one player who took PEDs into the Hall of Fame, then it’s not the “pure” institution many of the BBWAA voters claim it to be. Besides, the Hall of Fame hasn’t been “pure” for decades.

• Former commissioner Kenesaw Mountain Landis did everything he could to keep the MLB an all-white sport from the early 1920s to the mid-1940s, but he was still elected to the Hall of Fame in 1944.

• Gaylord Perry has admitted to throwing illegal pitches, but he still was elected to the Hall of Fame in 1991.

• Tim Raines has said he slid in bases head first because he didn’t want to break the cocaine vials he kept in his back pocket, but he was still elected to the Hall of Fame in 2017.

• Bud Selig oversaw baseball’s Steroids Era in the 1990s, and he got into the Hall of Fame almost unanimously in 2017.

There is no straight line that determines Hall of Fame status in baseball. Instead, it’s as crooked as a gerrymandered political district.

So much for “integrity” and “character.”

If the lockout wasn’t depressing enough for baseball fans this offseason, be prepared for more disappointment Tuesday. I predict Ortiz will fall a few votes short of induction, and Bonds and Clemens will drift back into the 60-percent range.

Good thing we have the Eras Committee, although O’Neil should have been in the Hall of Fame a long time ago.

Speaking of the Eras Committee, that’s the next step for Bonds and Clemens. They’ll be removed from the BBWAA ballot after this year, but in December, they will likely be on the Today’s Game Era Committee ballot, which considers players whose contributions happened from 1988 to the present.