Missouri men look for road win No. 2 at Alabama 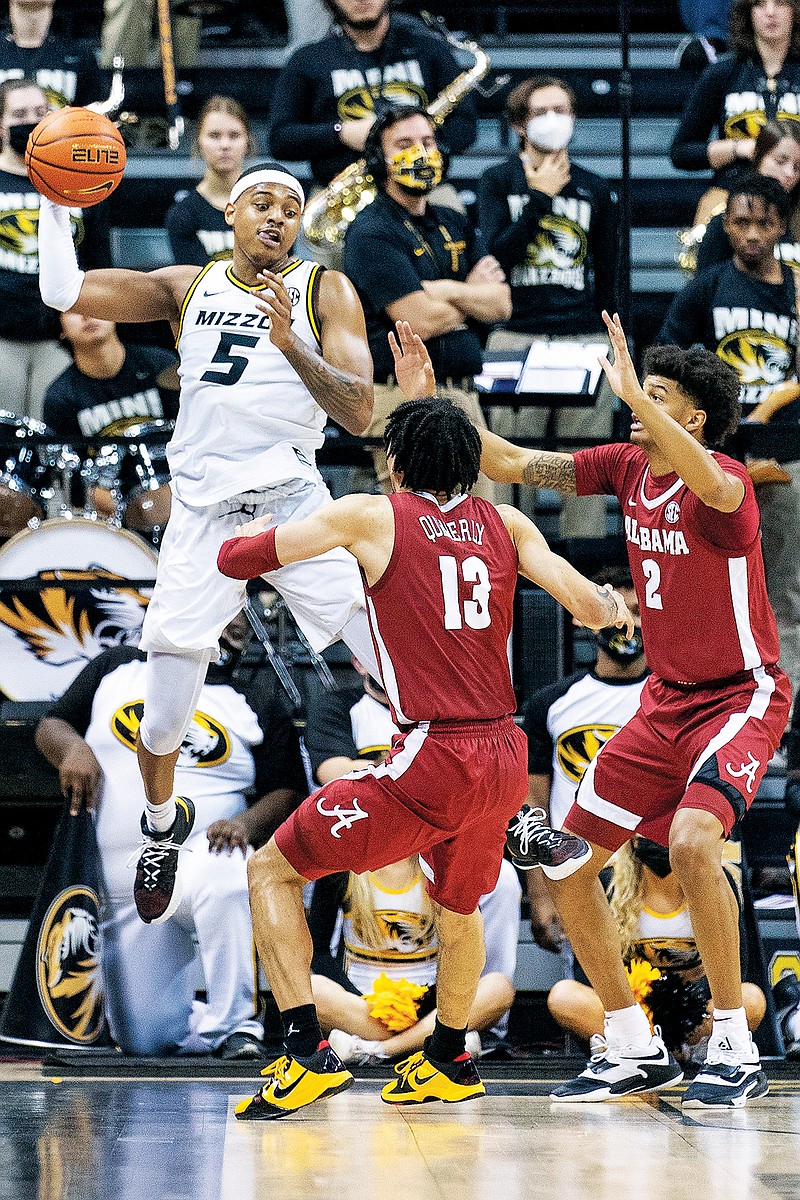 Missouri’s Jarron Coleman saves the ball from going out of bounds in front of Alabama teammates Jahvon Quinerly (center) and Darius Miles during a game earlier this month at Mizzou Arena. (Associated Press)

The Missouri Tigers picked up true road win No. 1 of the season Tuesday night.

The chance for No. 2 comes today when Missouri travels to Alabama to take on the Crimson Tide in a SEC contest.

Missouri is coming off a 78-53 win against Mississippi on Tuesday night in Oxford, Miss. The Tigers led 38-23 at the half, then cruised in the second half for the victory.

Amari Davis came off the bench to go 10-for-10 from the field on his way to a 23-point performance for the Tigers in the victory. Kobe Brown added 15 points, while Javon Pickett and Ronnie DeGray III each added 11 to give Missouri four players in double figures.

The 53 points allowed is the lowest Missouri has given up in a conference game this season.

Alabama defeated LSU 70-67 in a conference contest Wednesday night. The Crimson Tide are 7-0 when allowing fewer than 70 points in a game this season.

Missouri defeated Alabama 92-86 on Jan. 8 at Mizzou Arena. A 22-5 run early in the second half proved to be the difference for the Tigers in the victory. The Crimson Tide got as close as four points in the final minutes but could not finish the comeback.

Brown had 30 points and 13 rebounds for Missouri in the victory. Quinerly paced Alabama with 19 points, while Shackelford totaled 17.

Missouri will host Mississippi State on Sunday, Feb. 20. The game will start at 7 p.m. (SEC Network).

The game was originally scheduled to be played Jan. 5 at Mizzou Arena, but was postponed due to COVID-19 protocols in the Missouri program. Tickets previously sold for that game will be honored Feb. 20.

It will be the second game in three days between the two teams. Missouri was scheduled to play Saturday, Feb. 19, at Mississippi State. That game has now been moved to 6 p.m., Friday, Feb. 18, in Starkville, Miss.