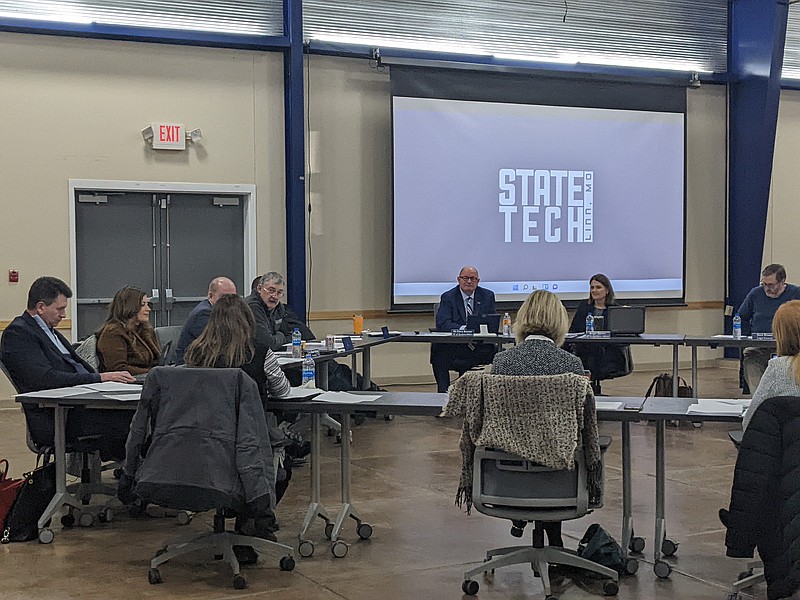 The State Technical College of Missouri Board of Regents met Friday morning. The board approved several items, including a tuition increase of 4 percent. (Ryan Pivoney/News Tribune)

Experiencing record enrollment and growth, State Technical College of Missouri is taking steps to stay ahead of demand and maintain momentum.

The State Tech Board of Regents met Friday morning for the first of its two annual meetings. The board approved a 4 percent increase to tuition, set academic calendars through 2025 and approved a new facilities management program.

The board heard from just about every major area on campus and took action on several items, including a minor tuition hike.

State Tech provides roughly 64,000 credit hours, meaning they will receive an additional $450,000 in tuition dollars next year from the increase.

The board also approved a new academic program: an associate of applied science in facilities and operation management degree.

The program would prepare students to manage small- to medium-sized operations working on various technical systems and cover how to repair, install and troubleshoot those systems.

State Tech would begin offering the program in fall 2023 and would primarily use courses it already offers in HVAC, construction, welding, and engineering and technology programs.

The first class will be capped at 28 seats, but Mary Lou D’Allegro, dean of curriculum and instruction, said the program could expand if there’s interest.

The board also approved academic calendars through 2025. Each semester follows the same format as the current calendar, which was revamped last year.

In fall 2020, State Tech faculty and staff submitted 1,046 early alert reports on students struggling with academics and the average time it took to respond to those reports was three days, Bowser said. Last semester, the college had 1,286 early alert reports and was acting on them the same day.

The rise in early alert reports correlates with State Tech’s record enrollment numbers and an increase in participation on campus.

With more than 2,000 students on campus this fall and five straight years of enrollment growth, State Tech is Missouri’s fastest growing public institution of higher education. It’s headcount has grown 61 percent since 2016.

As it attracts more students, the college has also begun offering more activities outside the classroom and is seeing success.

Over the course of the 2020-21 academic year, 2,227 students participated in campus events. However, in the past semester alone, 2,444 students have attended campus events, which have included concerts, paintball and crafts.

And the college isn’t done growing.

Bowser said State Tech has received 2,633 applications so far for the upcoming academic year and 744 students have already been admitted and enrolled.

“We are the fastest growing college in Missouri, and the numbers for next fall look like we’re going to continue that trend, although a lot can happen between now and next fall,” State Tech President Shawn Strong said.