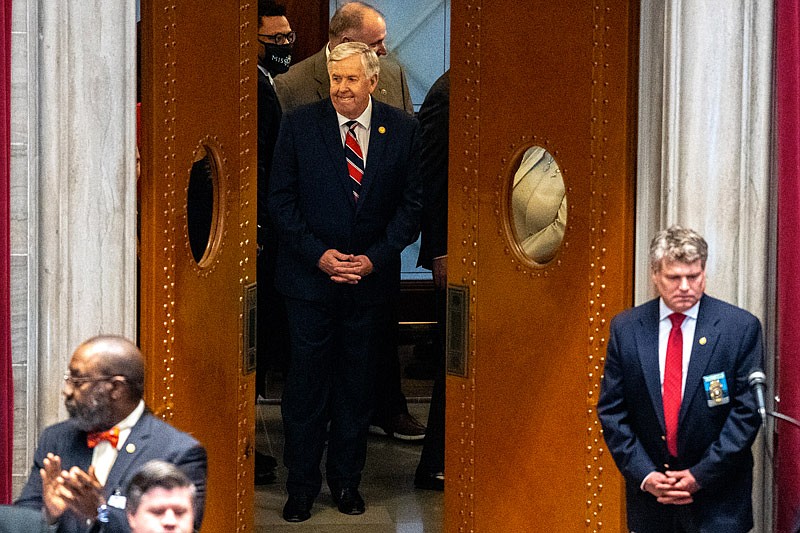 Missouri Gov. Mike Parson awaits his introduction in the state House of Representatives' antechamber ahead of his annual State of the State Address on Wednesday, Jan. 19, 2022. (News Tribune photo)

"This is long overdue," Missouri Gov. Mike Parson said during his State of the State address Wednesday as he reiterated his commitment to a wage increase for state employees.

Parson pointed to the state government's work throughout the COVID-19 pandemic and its economic progress, noting his administration's intentions to make "fundamental improvements" to the state through a recovered economy, including bolstering wages for Jefferson City's largest employer.

"I know that many of you would agree that Missouri has some of the best of the best in our ranks," Parson said. "The success of our state relies heavily on these public servants, and we must ensure we are able to recruit and retain quality team members to serve Missouri.

"And that is why we are proposing an immediate 5.5 percent cost of living adjustment for all state employees," Parson said. "This is long overdue."

Parson's statement was met with a standing ovation from lawmakers and guests in the House chamber.

Parson recommended a 5.5 percent cost of living adjustment (COLA) and a $15 minimum wage for state employees as part of a supplemental budget request his office hopes to see passed by Feb. 1. Those making more than $15 an hour would also see an increase if the proposal were to pass. If passed, the increases and adjustments for employees currently making $15 an hour or more would take effect beginning Feb. 1.

Missouri has remained at or near the bottom among other states in terms of state employee wages, with state positions facing turnover rates of 10-100 percent and vacancies at 30-100 percent, according to Parson's office.

The pay plan would cost $91 million, including $52 million from general revenue, the Governor's Office previously said.

Local lawmakers have also thrown their weight behind the proposed increase: Rep. Dave Griffith, R-Jefferson City, Rep. Rudy Veit, R-Wardsville, and Sen. Mike Bernskoetter, R-Jefferson City, urged their colleagues in the Missouri House to pass the proposal in a letter sent ahead of session.

The trio said the state, the largest employer in the Jefferson City area, frequently lost workers to higher paying jobs in the private sector or county jobs.

Veit said Wednesday his colleagues in the Legislature recognized the commitment of state employees and the impact of their work on other state efforts, including workforce development and health care -- though he stressed the need for continuous updates to state employee wages over the coming years in order to keep up.

"Everybody recognizes this is critical, but we can't just do it with a one-time raise and say it's good," Veit said. "It'll need to be a continuous program and an ongoing commitment to making sure we can attract and keep the leadership that our state needs, and we support that for the state and our community."

Bernskoetter and Griffith also voiced their support for the proposal to the News Tribune following the address.

"The standing ovation should tell you how many people support this," Bernskoetter said.

"It's something that's going to happen," Griffith said. "Thankfully, we in Missouri have a balanced budget and I hope that we can keep these increases coming year-after-year to make up for the time we've spent at the bottom."

The lawmakers discussed the issue with the business community during a Jefferson City Area Chamber of Commerce event last week, naming it among their highest priorities for the legislative session.

The plan has received support from across the aisle as well, with Rep. Peter Meredith, D-St. Louis, the ranking minority member of the House Budget Committee, among them.

State workers received a 2 percent COLA at the start of the year after missing a raise in 2021 amid the pandemic. The state workforce received COLAs through two previous budgets.

Various state agencies, including the Department of Transportation and Department of Social Services, have requested salary increases over the past few years. The Department of Public Safety tweeted out its support for the proposed increase, saying it would allow the state to compete with other employers.

The recommendation is being carried as a bill by House Budget Chairman Rep. Cody Smith, R-Carthage, who touted its importance alongside Senate Appropriations Committee Chairman Sen. Dan Hegeman, R-Cosby, when it was unveiled in December.

The bill took its first steps in the House Budget Committee last week, where it faced limited push-back. The committee has not yet taken a vote on the bill.