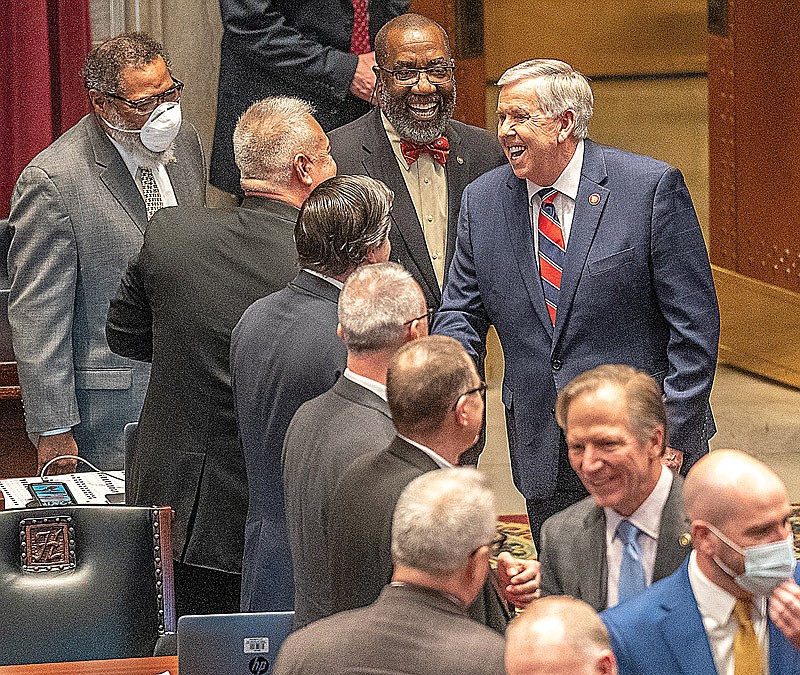 Missouri Gov. Mike Parson greets members of the state House of Representatives as he enters that chamber on Wednesday, Jan. 19, 2022 at the Missouri Capitol in Jefferson City. (Ethan Weston/News Tribune photo)

Missouri Gov. Mike Parson proposed massive new spending on infrastructure and college buildings, and still found money to set aside for pensions and future revenue shortfalls, in the budget submitted Wednesday to lawmakers.

Missouri will enter the new fiscal year with nearly $3 billion in surplus general revenue, an anticipation of record future tax collections and billions more in federal aid. The biggest investments are one-time items that could lessen the burden on taxpayers for ongoing expenses, making more money available in the future.

Parson is proposing a $47.3 billion budget, an increase of more than one-third over current spending. Of that amount, there is a 16.7 percent increase in general revenue appropriations and a 63 percent increase in the use of federal funds, mainly from coronavirus relief money and match funding for expanded Medicaid eligibility.

"When other states will be filling spending gaps and budget shortfalls, we will be making investments in the future, because in Missouri, we took a common-sense approach to the pandemic, never shut down businesses, and have always had a conservative and balanced budget," Parson said in the prepared remarks for his annual State of the State address.

• $722 million for childcare providers, with help for struggling centers to stay in business and money to help parents pay for care.

• $500 million to invest in the Missouri State Employees Retirement System to help it maintain long-term solvency and potentially reduce the annual contributions.

• $281 million for a cash reserve fund that could be tapped when revenues fall instead of imposing mid-year budget cuts.

Missouri received record general revenue receipts of $11.2 billion in the year that ended June 30 and that is expected to decline only $50 million in the current year. The budgets for both years were based on much lower revenues, allowing the surplus of just less than $3 billion to accumulate.

"There are some ongoing programs that we are funding, such as pay raises and provider rates," Budget Director Dan Haug said in a briefing for reporters. "But with the way our revenues are growing right now, the way they grew last year, and what we expect to see in the future, we are very confident we have enough ongoing revenue to sustain that spending."

The pay raise is a 5.5 percent boost Parson wants enacted by Feb. 1 and a new base pay for state jobs of $15 an hour. There are 4,500 jobs to be filled in state government, many in prisons, mental health facilities and other areas providing services.

The pay raise is expected to cost $119 million in the current fiscal year and $236 million in the coming year, with about half of the cost from general revenue. And while Parson is in a hurry to get the raise enacted, some conservative lawmakers are questioning whether it is necessary.

"We can't continue to run our institutions with the number of employees we have," Haug said to the Senate Appropriations Committee in a hearing Wednesday morning.

Democrats said they will be backing many of the items in the budget plan.

"When it comes to the budget committee, we are in a good starting place, because instead of having to ask for additional funding for these things that we deeply care about, we just we are going to be defending the governor's budget," House Minority Leader Crystal Quade said at a news conference after Parson's speech.

The American Rescue Plan Act, approved in Congress last March, provided $2.8 billion for the state to spend in replacement of revenues lost during coronavirus pandemic and to spend on infrastructure projects.

Major spending items from Parson's plan for those funds include:

• $468.9 million in capital improvements on college and university campuses, representing 50 percent of the cost of the top priority project at 26 community and technical colleges and four-year institutions.

• $400 million for broadband access, with $250 million to reach approximately 75,000 households without access to even moderately fast internet connections.

There is also money for capital improvements at community health centers, a facility that will combine the state labs for the Department of Health and Senior Services, and the Agriculture, Natural Resources and Conservation departments.

The funding for new construction goes along with a $51.6 million increase in core state support for higher education and new funding for scholarships and other programs.

"We are making the largest investment in higher education we have ever seen," Mardy Leathers, director of the Office of Workforce Development, said in a briefing for reporters before Parson's speech.

Parson is also proposing $69.3 million from the federal relief funds to develop a 78-mile section of the old Rock Island Railroad in south-central Missouri. The state recently took ownership of the abandoned rail line and will connect it to the Katy Trail State Park along the Missouri River.

It will create new recreation opportunities for Missourians and new economic opportunities in the communities along the trail, Department of Natural Resources Director Dru Buntin said. It will be the longest continuous trail system in any state, he said.

"It is going to create an international destination for cyclists," he said.