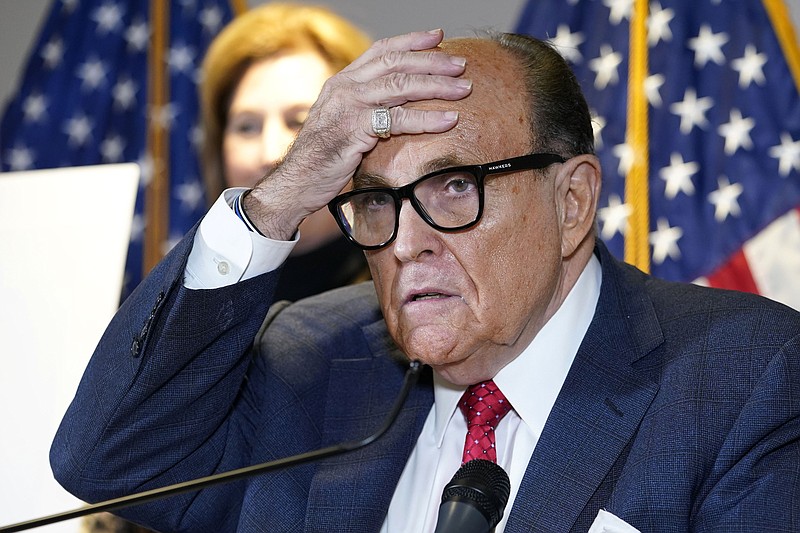 FILE - In this Nov. 19, 2020, file photo, former New York Mayor Rudy Giuliani, who was a lawyer for President Donald Trump, speaks during a news conference at the Republican National Committee headquarters in Washington. The House committee investigating the Capitol insurrection has issued subpoenas to some of Donald Trump's closest advisers, including Rudy Giuliani Sidney Powell stands behind. (AP Photo/Jacquelyn Martin, File)

WASHINGTON (AP) -- The House committee investigating the U.S. Capitol insurrection issued subpoenas Tuesday to Rudy Giuliani and other members of Donald Trump's legal team who filed bogus legal challenges to the 2020 election that fueled the lie that the race had been stolen from the former president.

The committee is continuing to widen its scope into Trump's orbit, this time demanding information and testimony from Giuliani, Jenna Ellis, Sidney Powell and Boris Epshteyn. All four publicly pushed Trump's baseless voter fraud claims in the months after the election.

"The four individuals we've subpoenaed today advanced unsupported theories about election fraud, pushed efforts to overturn the election results, or were in direct contact with the former President about attempts to stop the counting of electoral votes," Mississippi Rep. Bennie Thompson, Democratic chairman of the panel, said in a statement.

Epshteyn in a tweet called the committee illegitimate and its efforts part of a "witch hunt" against Trump and his supporters. The others who were subpoenaed did not respond to messages seeking comment.

Trump's legal team sought to overturn the election results in the battleground states by filing lawsuits alleging widespread irregularities with ballots and claims by partisan poll watchers who said they couldn't see everything going on, in part because of precautions taken as a result of the COVID-19 pandemic. More than 50 lawsuits were filed, mostly in battleground states.

The lawsuits were soundly batted down in the courts, sometimes within days of filing. However, the legal challenges and the multiple press conferences held by Giuliani and others helped galvanize Trump supporters behind the idea the election had been stolen, even though Trump's own attorney general said there was no evidence of widespread fraud, and local officials said it had been the most secure election in history.

The committee said it is seeking records and deposition testimony from Giuliani, the 76-year-old former New York City mayor once celebrated for his leadership after 9/11, over his promotion of election fraud claims on behalf of Trump. The panel is also seeking information about Giuliani's reported efforts to persuade state legislators to take steps to overturn the election results.

Also on Tuesday, the Justice Department notified a federal appeals court that it planned to turn over some Trump records sought by the Jan. 6 committee by 6 p.m. Wednesday barring a new court order.

Trump sued last year to try to stop the committee from receiving notes and other documents even after Biden waived executive privilege. While the federal appeals court in Washington rejected Trump's request, the court delayed any release of records while the U.S. Supreme Court considers the case.

The Justice Department argued Tuesday that the appeals court opinion doesn't cover a batch of records for which Biden waived executive privilege after Trump originally sued. It said Trump had been given 30 days' notice in mid-December to seek a new stay. The appeals court could still intervene to block any release.

Four days after the Nov. 3, 2020, election, while the Associated Press and other media outlets were calling it for Joe Biden, Giuliani held a news conference at a landscaping company in Philadelphia to announce his team planned to challenge the election results. It was the beginning of a pressure campaign to allot electoral votes in battleground states where Biden won over to Trump instead.

Ellis and Powell also appeared with Giuliani at press conferences, pushing false claims of election fraud, and Giuliani met with local elected officials to push false theories about corrupt voting systems. Powell was eventually removed from the team after she said in an interview she was going to release "the kraken" of lawsuits.

Giuliani even appeared in a Pennsylvania courtroom for the first time in nearly three decades to argue an election case. During the course of the hearing, he fiddled with his Twitter account, forgot which judge he was talking to and threw around false accusations about a nationwide conspiracy by Democrats to steal the election.

The lawsuit had been Trump's best-case scenario to overturn the election using the courts -- not because of the facts of the case but because of the number of electoral votes at stake, 20.

"One might expect that when seeking such a startling outcome, a plaintiff would come formidably armed with compelling legal arguments and factual proof of rampant corruption," Judge Matthew Brann wrote at the time. "That has not happened."

Giuliani was a cheerleader for Trump through much of his presidency, serving on his legal team during special counsel Robert Mueller's Russia investigation and defending him in repeated television news appearances. However, he also found himself personally entangled in Trump's own political and legal woes.

He was a central character in the first impeachment case against Trump, focused around the former president's efforts to get Ukraine to dig up dirt on Democratic challenger Joe Biden and his son, Hunter. Federal investigators last year raided Giuliani's home in New York as part of an investigation into his own Ukraine work.

And Giuliani spoke at the rally in front of the White House that preceded the Jan. 6 insurrection. Like Trump, he suggested the certification of Biden's victory was an existential crisis for the country and used rhetoric that alluded to violence.

His speech came after dozens of judges -- including the U.S. Supreme Court, with three Trump nominees -- rejected every significant claim of alleged voter fraud brought by Giuliani and other lawyers. More than a year later, there still is no evidence of criminality. Even a widely criticized review ordered by Republicans in Arizona, one of the states Biden flipped to Democrats in 2020, did not produce proof to support Trump's false claims.

The nine-member panel is also demanding information from Ellis, a legal adviser who the lawmakers said reportedly prepared and circulated two memos that analyzed the constitutional authority for then-Vice President Mike Pence to reject or delay counting the electoral votes from states that had submitted alternate slates of electors. Pence said he had no such authority.

Besides Giuliani, Powell was the most public face of Trump's attempts to contest the election, routinely making appearances on behalf of the president.

In numerous interviews and appearances post-election, Powell continued to make misleading statements about the voting process, unfurled unsupported and complex conspiracy theories involving communist regimes and vowed to "blow up" Georgia with a "biblical" court filing.

Powell and another pro-Trump lawyer -- Lin Wood, not yet named by the committee -- were eventually ordered to pay $175,000 by a court after they filed frivolous election lawsuits in Michigan.

The last person subpoenaed Tuesday by the committee is Epshteyn, a former Trump campaign strategic adviser, who reportedly attended meetings at the Willard Hotel in the days leading up to the insurrection. The committee said Epshteyn had a call with Trump on the morning of Jan. 6, 2021, to discuss options to delay the certification of election results in the event of Pence's unwillingness to deny or delay the process. 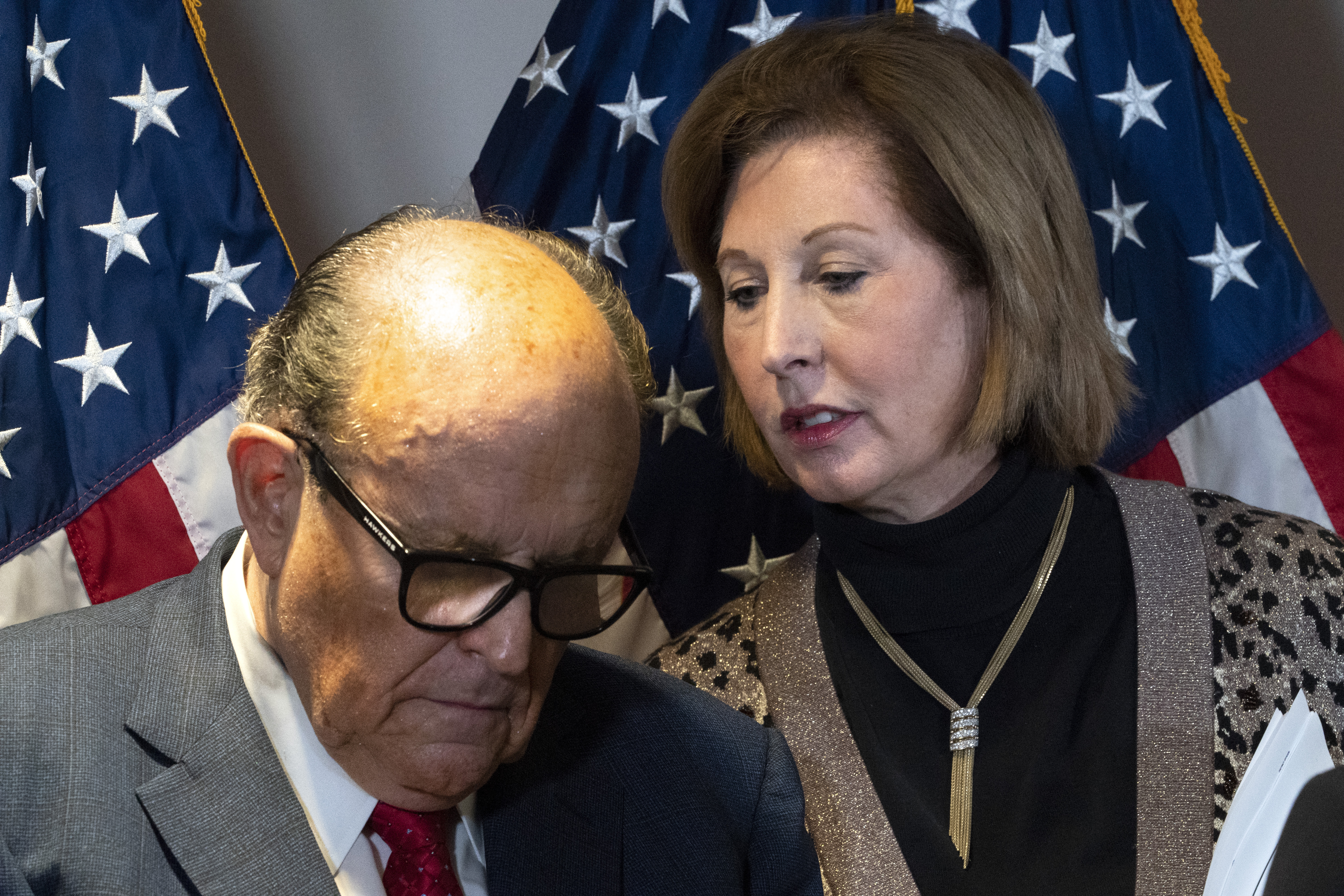 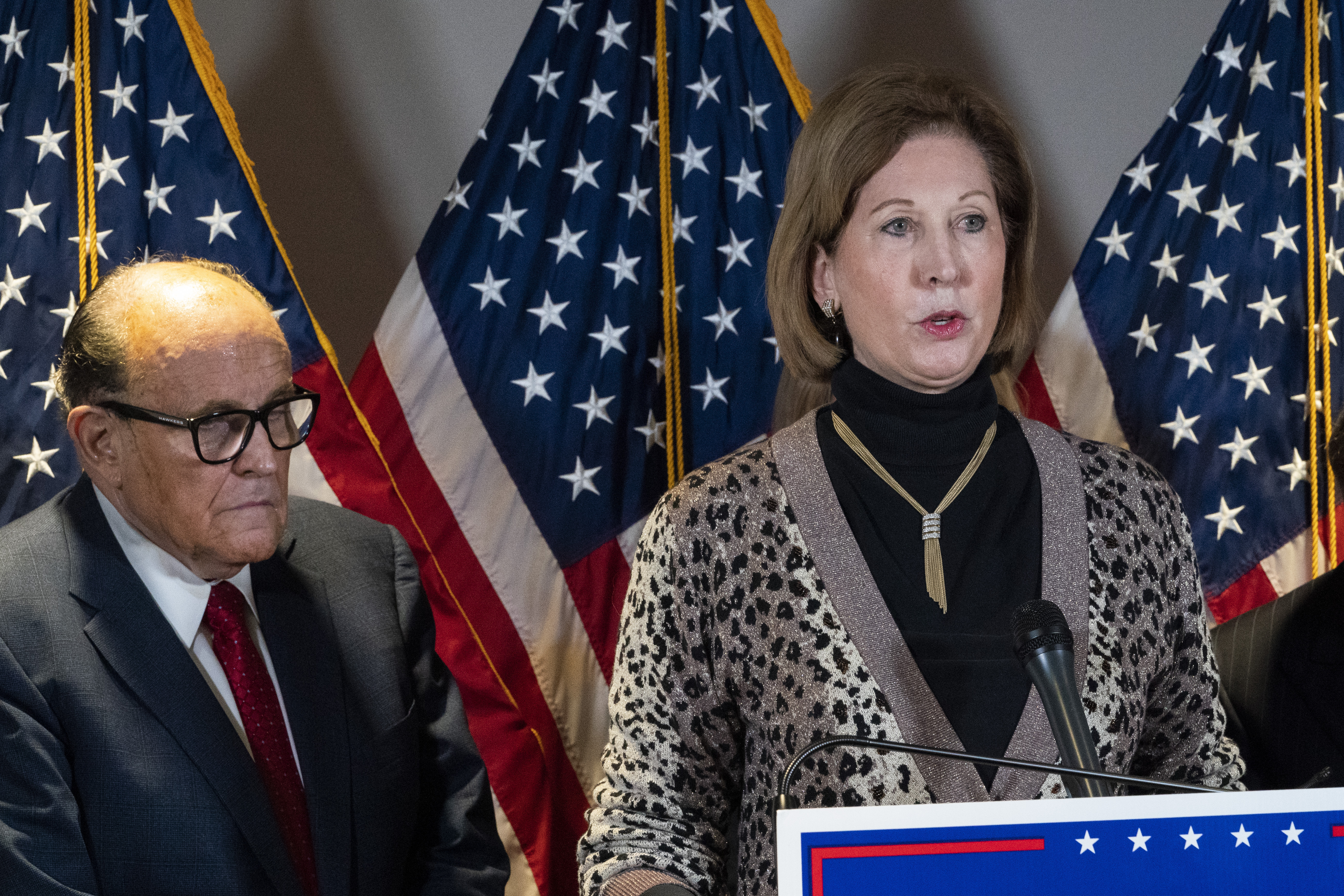 FILE - Sidney Powell, right, speaks next to former Mayor of New York Rudy Giuliani, as members of President Donald Trump's legal team, during a news conference at the Republican National Committee headquarters on Nov. 19, 2020, in Washington. The House committee investigating the Capitol insurrection has issued subpoenas to some of Donald Trump's closest advisers, including Rudy Giuliani and Sidney Powell. (AP Photo/Jacquelyn Martin, File) 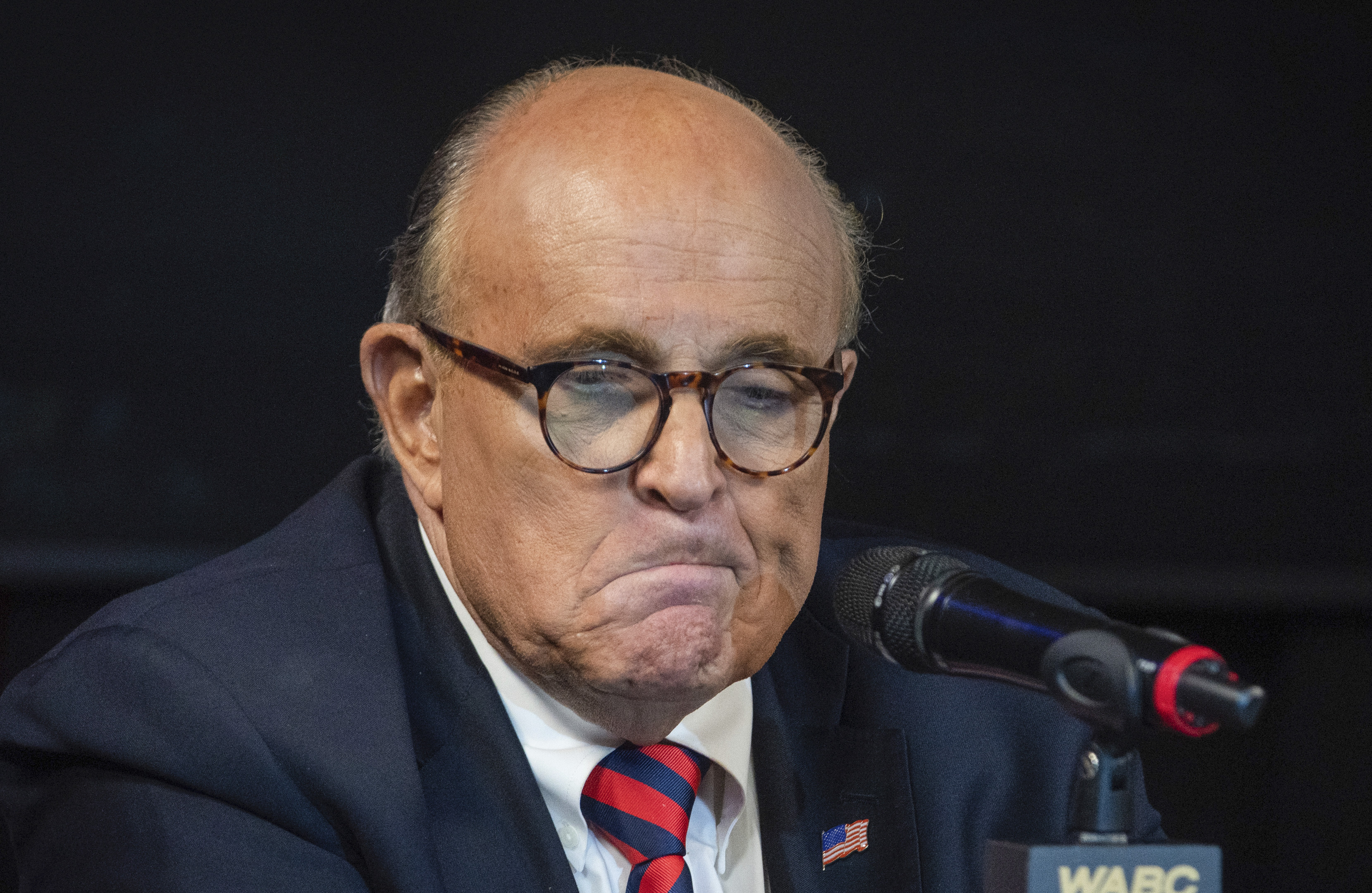 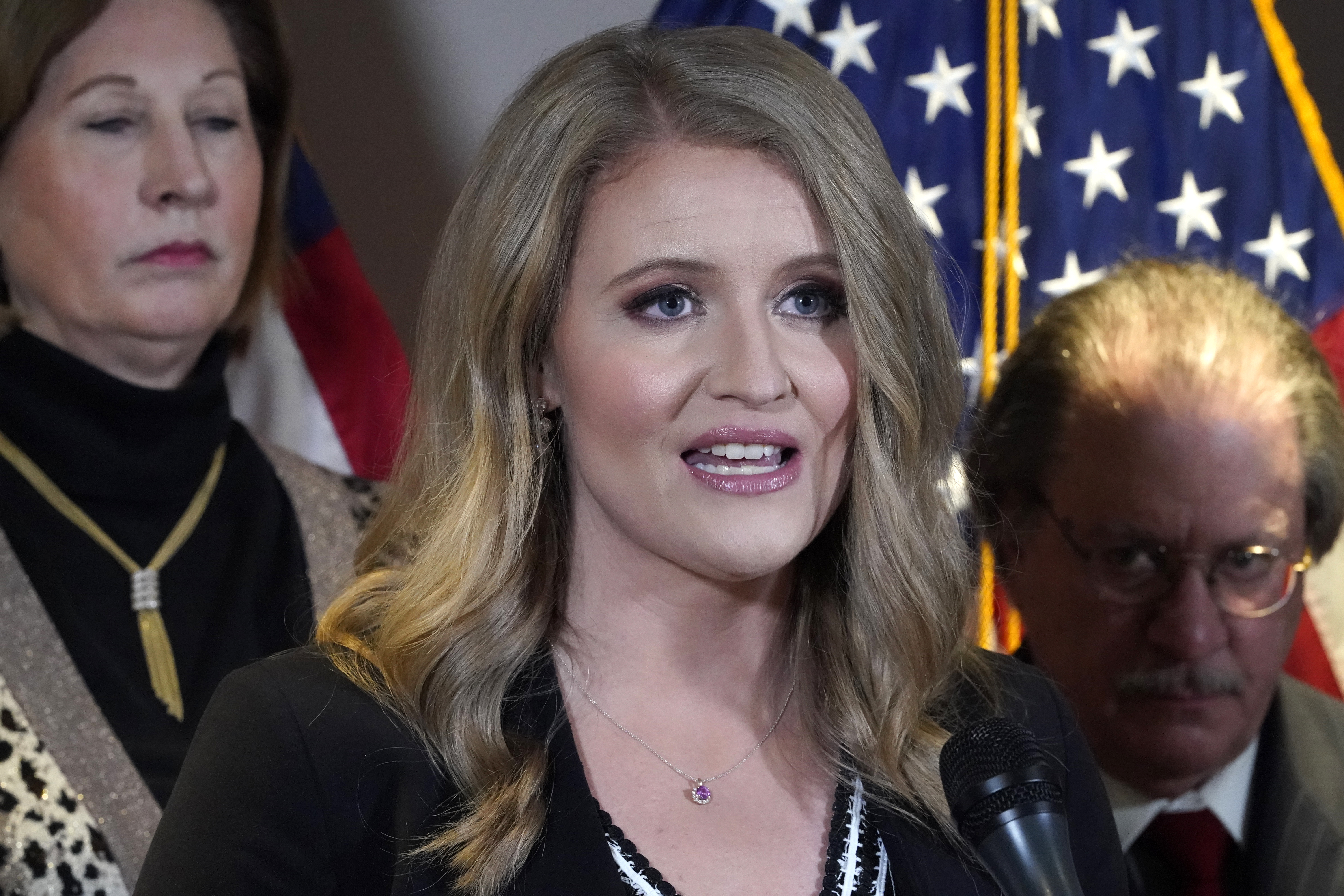