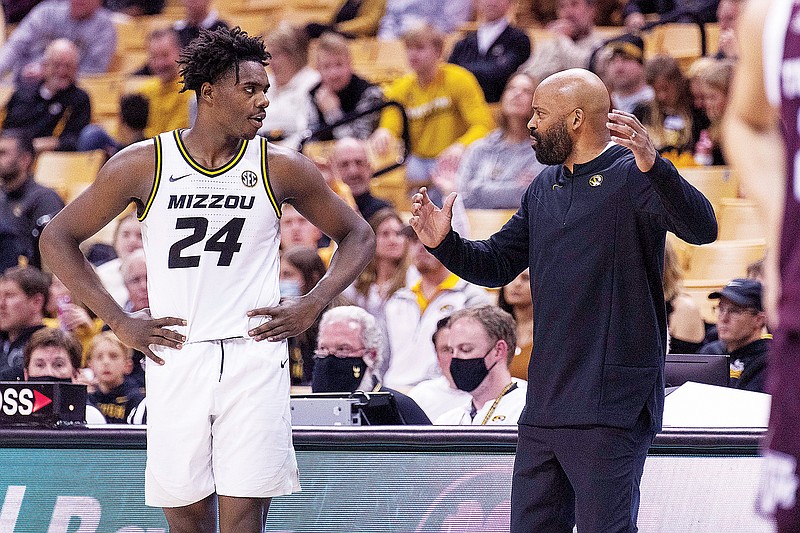 Missouri coach Cuonzo Martin talks to Kobe Brown during a timeout in the second half of Saturday’s game against Texas A&M at Mizzou Arena. (Associated Press)

Mississippi has lost its last two games, falling 67-51 last Tuesday at Texas A&M before losing 80-71 at home Saturday to Auburn. Mississippi led by as many as 14 points against Auburn.

Jarkel Joiner leads the Rebels in scoring at 13.6 points per game. He has missed the last two games with a back injury. Joiner, a 6-foot-1 senior guard, played for Oxford (Miss.) in the Great 8 Classic in 2016 at Fleming Fieldhouse and holds the tournament record with 124 points in three games.

Mississippi is averaging 69.3 points per game while allowing 65.4 to its opponents.

Missouri has also lost its last two games, 87-43 last Wednesday at Arkansas and 67-64 on Saturday at home against Texas A&M.

Kobe Brown is the lone Tiger averaging in double figures at 14.2 points per game. He also tops the Tigers with 8.6 rebounds per game. Brown and Javon Pickett (9.3 ppg) are the only two players to start all 16 games this season for the Tigers.

Missouri is scoring 66.6 points per game, while allowing of 72.4

This is Missouri’s fifth true road game of the season. The Tigers are 0-4 in those games and have been outscored by an average of 84.5-52.3.

Mississippi is 8-2 in home games this season.

Mississippi has won 15 of the previous 18 meetings, including the last three, with Missouri, all in the SEC. Two of Missouri’s wins have come with Cuonzo Martin as coach, including a 71-68 road victory in 2020.

Missouri will play Saturday at Alabama. The Tigers defeated the Crimson Tide 92-86 earlier this month at Mizzou Arena.