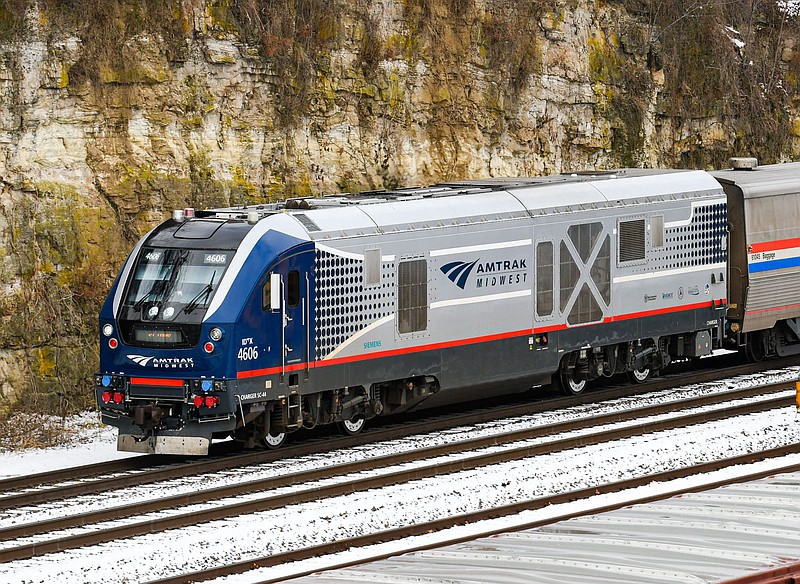 Now, state lawmakers are grappling with the level of need for Amtrak's Missouri River Runner service.

Amtrak operates the River Runner passenger train, which links St. Louis and Kansas City, under a contract with the state. The service previously had two trains running daily round trips but is back down to one daily round trip, as it began doing at the start of the COVID-19 pandemic.

One train leaves Kansas City in the morning and one leaves St. Louis in the afternoon. Both stop in Jefferson City and several other communities along the route between the state's largest cities.

Since 2010, the state has failed to fully fund its Amtrak service, leading to the River Runner passenger train operating on overdue debt.

MoDOT Director Patrick McKenna said operating costs for the passenger service were naturally increasing with the rise of labor and fuel costs, but state lawmakers didn't want to increase funding for Amtrak.

McKenna said the department would request the additional funding each session, but it wasn't appropriated. The service continued and the state built up debt.

"What would happen is on July first each year, we'd get the core appropriation (from the state Legislature) and that core appropriation started paying the overdue bill more than the advancement of the service for the following year," McKenna said. "And it got to the point where that grew almost as much as the cost of the service itself and that was, obviously, a problem."

"So we have actually come current on the billing," he said.

McKenna said the state also implemented a mechanism to compare the billed operating costs to ridership revenue and what the state appropriates out of general revenue to determine what service will look like for the year without taking on debt.

McKenna said MoDOT doesn't have any remaining unpaid service debt and he doesn't expect any to develop in fiscal year 2022 under the new plan.

Also because of the new plan, McKenna said MoDOT determined it couldn't afford to operate two daily River Runner trains as it had been since July.

McKenna said MoDOT supports running two trains per day and understands the positive economic impacts it would have, but it's requesting the same core Amtrak appropriation as fiscal year 2021, which is enough to operate a single train each day for the first six months.

"It's become clear since then that there is no more federal direct operating support from Amtrak on this, so we need to work with the Legislature, either through ARP fund allocations or direct general revenue infusion, to up our budget request by about $2.5 million in order to support two trains a day for the entire fiscal year of 2023."

MoDOT is asking the Legislature for $10.8 million in state funding for Amtrak, which would allow the department to run one train for the first half of the year and two trains for the second half of the year, McKenna said. To run two trains a day for the full year would cost an estimated $13.2 million, he said.

McKenna said passengers can expect one train to run daily until July and then two trains daily between July and December.

He said the plan for two trains is also subject to the ability of Amtrak.

"We run the risk of going to them and saying, 'Hey can you turn this back on?' And them saying, 'We don't have the labor to do it,'" McKenna said. "So that's one of the challenges the way we're structured and funded is creating."

McKenna said the department will be engaging in budget discussions with House committees during the next couple weeks, which will surely bring up the issue of funding for Amtrak service.

He said the issue seems to be a high priority for some lawmakers -- particularly those who see the benefits of the River Runner in their districts -- and nowhere on the radar of others.

"We should end up right where we need to be at the end of this state fiscal year," McKenna said.

The state is also working off a grant from the Federal Railroad Administration, and still has about $30.7 million left. The grant was used to make capital improvements to stations along the River Runner route.

Linda Wilson Horn, communication director for MoDOT, said the FRA's 2015 grant to the state for improving passenger rail service included a provision that requires MoDOT to pay back the amount over 20 years if rail service is discontinued.

MoDOT received $49.8 million from the grant, and the payback is reduced by $2.4 million each year. The last year with a potential payback is 2035, Horn said.

"So we're working our way through that," McKenna said. "And the terms of the grant requires us to retain the passenger service on the River Runner route."