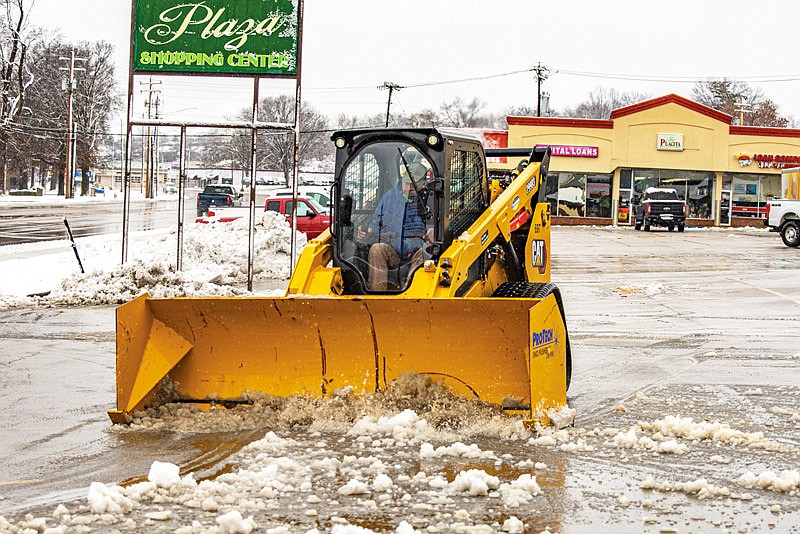 An equipment operator for Twehous Excavating clears the lot Saturday, Jan. 15, 2022, at Jefferson Plaza in Jefferson City on the morning following the first significant snowfall of the year. (Photo by Ken Barnes/News Tribune)

The first real snow storm this winter in Central Missouri didn't cause many problems for local road crews.

Jefferson City Operations Division Director Britt Smith said their crews were out by 5:30 a.m. Saturday which was about the same time as the change over from rain to snow occurred.

"The pavement got covered quickly," Smith said. "I thought we'd have a little more time, but the pavement temperature dropped very fast. The good news was the crews were already out."

Light traffic also helped crews get streets treated faster. Smith said by 3 p.m. Saturday afternoon they had their operations wrapped up with the main thoroughfares such as Main Street, High Street classified as "mostly clear."

Smith and Cole County Road Superintendent Brian Boyce said their departments will be monitoring for re-freezing overnight and into early Sunday morning.

"This wet snow made it easier to plow," Boyce said. "It doesn't bond to the pavement surface like a dry, cold snow."

Boyce also noted they didn't have to use as much salt during this storm.

"The air temperature was just above freezing most of the time we were out," Boyce said. "That helps our budget and that's good for the roads, too. Salt is as corrosive to the roads as it is to vehicles. Pavements can deteriorate a lot faster when you put a lot of salt down."

Smith said he didn't have final figures, but city crews used "several hundred tons of salt for this storm."

All available Missouri Department of Transportation crews were out across the state working 12-hour shifts, but officials said staffing was still short across the state due to turnover and sickness. Smith and Boyce said they had full crews for Saturday and they had not yet been affected by COVID-19.

Meteorologist Jim Sieveking with the National Weather Service in St. Louis said at the Columbia Regional Airport, which is the main NWS weather reporting station in Central Missouri, 3.6 inches of snow fell while they had 2- and 3-inch snowfall reports come in from Jefferson City along with a band of 4 inches east of Jefferson City.

"There was more moisture for this storm to work with than we had predicted, but the change from rain to snow didn't happen until early Saturday morning, and it was a quick mover for a snow system so that all helped," Sieveking said. "A half-inch to three-quarters of an inch of rain fell before it turned to snow in Central Missouri."

Sieveking said another round of arctic temperatures was forecast this coming week, but the good news was there shouldn't be much moisture associated with it.

"Wednesday temperatures will plummet and Thursday are highs will only be in the lower 20's," Sieveking said. "Right now we're on pace for a typical winter. We had a relatively warm December and we've had at or below normal temperatures for January. When you combine those it's just about an average winter."