NFC Playoffs: Rodgers looking forward to having a full house 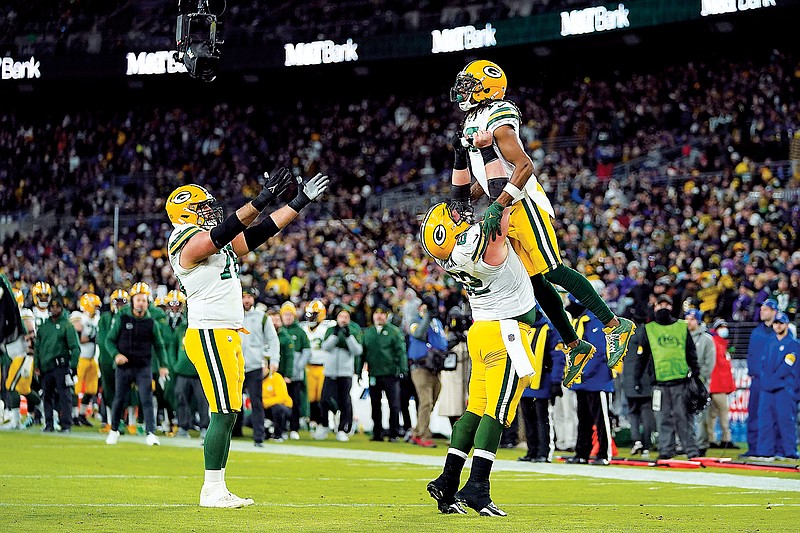 In this Dec. 19, 2021, file photo, Packers wide receiver Davante Adams is lifted by teammate Lucas Patrick after scoring a touchdown against the Ravens in Baltimore. (Associated Press)

The Green Bay Packers are the only NFL team that didn’t lose a game at home in the 2021 season. They’re counting on their frenzied fanbase and frigid climes to help them get to the Super Bowl for the first time in 11 years.

“I’m really looking forward to having a full crowd, that good old Green Bay weather,” Aaron Rodgers said after the Packers’ 13-4 finish gave them the top seed in the NFC for the second straight year. “It’s been an advantage for us for a long time. I think it’s an advantage having 78,000 instead of 7,800 like we did last year.”

Actually, only 7,772 fans attended last year’s conference championship because of COVID-19 restrictions when Tom Brady led Tampa Bay to a 31-26 win at Lambeau Field. Brady and the Buccaneers went on to beat Kansas City in the Super Bowl, Tampa Bay’s first title since 2003 and Brady’s record seventh championship to go with the half dozen he won in New England.

This time, the Packers can have full capacity — 81,441 — at their games beginning with the divisional round.

The Buccaneers are the No. 2 seed followed by the Dallas Cowboys, led by rookie sensation Micah Parsons and Trevon Diggs on defense and a talent-laden offense guided by a now-healthy Dak Prescott, and the Los Angeles Rams. The wild cards are Arizona, San Francisco and Philadelphia.

The Rams, powered by the midseason additions of Odell Beckham Jr. and Von Miller, are hoping to do what the Bucs did a year ago and play in the Super Bowl at their home stadium, SoFi Field in Inglewood, Calif., on Feb. 13.

Wild-card weekend pits the Eagles at the Buccaneers today, the 49ers at the Cowboys on Sunday and the Cardinals at the Rams on Monday night.

• Why they’ll prevail: The Packers can get to the Super Bowl without ever leaving Lambeau Field. Rodgers has thrown 20 TD passes without an interception in his past seven games, and he said the fractured pinky toe that bothered him the second half of the season is starting to feel better. The Packers are getting healthier just in time for the playoffs after struggling through injuries throughout 2021. The O-line got star LT David Bakhtiari and C Josh Myers back for the regular-season finale. CB Jaire Alexander and OLB Za’Darius Smith are expected to be back for the playoffs.

• Why they’ll derail: A defense that seemed much improved under new coordinator Joe Barry for much of the season has started to slump. After allowing 18 points per game during an 8-2 start, the Packers have given up 27.3 points per game over their past nine. Special teams has been a major weakness all season. Slow starts also have been a problem. The Packers have been outscored 84-51 in the first quarter. Fall behind early in the playoffs and they might find themselves booking flights to Cancun instead of L.A.

“It is great having the road to the Super Bowl going through Lambeau. But as we learned last year, that doesn’t guarantee anything. We have to take advantage of being at home and playing in our climate.” —Packers coach Matt LaFleur.

• Why they’ll prevail: The defending champs haven’t been as dominant as some people envisioned when the team defied the odds by returning every starter from last season, but it hasn’t been because of Tom Brady and a potent offense that averaged 406 yards and 30.1 points. The Bucs set a franchise record for regular-season victories and won their first NFC South title in 14 years. At age 44, and in his 22nd season, Brady has had one of his best years, leading the league in completions (a single-season record 485), attempts (719), passing yards (5,136) and TD passes (43). He’s just the third QB in the past 30 years to lead the league in all four categories.

• Why they’ll derail: The dominant defense led by Lavonte David, Shaquil Barrett and Devin White peaked late last season, keying an impressive postseason run. Injuries have made it difficult to build on that success. CBs Carlton Davis, Sean Murphy-Bunting and Richard Sherman spent time on IR. Safeties Jordan Whitehead and Antoine Winfield Jr. have been in and out of the lineup. And while the run defense yields an NFC-low 92.5 yards per game, opponents have enjoyed more success on the ground lately with LBs David (foot), Barrett (knee) and Jason Pierre-Paul (shoulder) ailing.

• Quote: “I think our guys are just prepared. Once we figure the other team out, they’re in trouble.” — coach Bruce Arians, dismissing the notion parting ways with oft-troubled WR Antonio Brown could wind up galvanizing his high-powered offense and inspiring a deep playoff run.

• Why they’ll prevail: QB Dak Prescott and the league’s No. 1 offense have plenty of options to send the Cowboys deeper in the playoffs than they’ve been in 26 years. While their numbers aren’t staggering, WRs Amari Cooper and CeeDee Lamb can take over games. Cedrick Wilson can be a dangerous option with Michael Gallup sidelined by a knee injury. Star RB Ezekiel Elliott has battled a knee injury most of the year, but looks to be getting healthy at the right time.

• Why they’ll derail: The Cowboys have an opportunistic defense that led the NFL with 34 takeaways in the regular season. That unit has played more freely when Dallas takes a lead. The Cowboys will be in trouble if they don’t, and they’ve had a tendency to let opposing rushing attacks dictate games when they don’t get the takeaways. Dallas never led in its last four losses and didn’t force a turnover in three of them.

• Quote: “For me to have this opportunity before me on Sunday is kind of unimaginable. Honestly, just because I can’t really believe it right now. It’s a surreal moment. Most importantly, I’m excited and I can’t wait to do it with my brothers.” — Lamb, a second-year player preparing for his playoff debut.

• Why they’ll prevail: The Rams’ offense is good and getting better, with WR Cooper Kupp’s historic season and QB Matthew Stafford’s big-play ability pushing Los Angeles to five wins in six games down the stretch. Their passing game ranks fifth in the NFL with 273.1 yards per game. After two years of stagnation, L.A. is scoring points in bunches while controlling the ball with a balanced approach. The Rams seem capable of outscoring just about any opponent that has defensive flaws to exploit, particularly with a revitalized rushing attack led by Sony Michel and Cam Akers.

• Why they’ll derail: Los Angeles’ defensive stars are supported by an unimpressive cast, and opponents have been taking advantage of those flaws. The Rams’ linebackers and defensive backs beyond Jalen Ramsey are simply not at all impressive, and they’re getting worse: leading tackler Jordan Fuller (ankle) is out for the season, further depleting the secondary with the departure of its top safety. From targeting David Long or Nick Scott in coverage to forcing LB Troy Reeder to stop plays in the middle of the field, good opponents have racked up big numbers on the Rams’ defense, and there are only good opponents left in the playoffs.

• Quote: “You just have a little bit more familiarity with it, but it’s going to come down to the same things that are in alignment with winning football games: executing, taking care of the football, getting takeaways, tackling, breaking tackles, being good situationally in third down and red area.” — Rams coach Sean McVay on opening the playoffs against NFC West rival Arizona.

• Why they’ll prevail: The best news for the Cardinals is that they’re going on the road. Arizona had a remarkable 8-1 record away from home this season, including a win over the Rams in Week 4. Arizona is a team that doesn’t have a ton of holes when it’s playing well and QB Kyler Murray has been one of the best in the league, completing nearly 70% of his passes. The Cardinals could also get a huge boost if three-time NFL Defensive Player of the Year J.J. Watt is able to return from a shoulder injury.

• Why they’ll derail: Simply put, the Cardinals aren’t playing very good football these days. Arizona is 1-4 in its past five games, 4-6 in the past 10 and hasn’t looked much like a team ready to go on a deep playoff run. Arizona’s offense hasn’t looked the same since three-time All-Pro WR DeAndre Hopkins sustained a knee injury.

• Quote: “I think this is what he’s been waiting for for three years. He’s a guy who wants to be playing for something and knows he’s playing for something. This is his first shot at the playoffs, and I expect him to probably play the best game of his career. I know he’s going to give it everything he’s got,” — coach Kliff Kingsbury on Murray.

• Why they’ll prevail: The Niners offense is loaded with playmakers who can make big plays out of seemingly nothing. Deebo Samuel had 1,770 yards from scrimmage and 14 TDs as a receiver and a running back, George Kittle is one of the top tight ends at getting yards after the catch and rookie RB Elijah Mitchell averaged 100 yards from scrimmage per game. Throw in improving WR Brandon Aiyuk and versatile FB Kyle Juszczyk and coach Kyle Shanahan has numerous options for his creative playbook.

• Why they’ll derail: While San Francisco is loaded with playmakers, there are still major questions at quarterback. Jimmy Garoppolo had good stretches this season, but still is apt to throw interceptions at key times and struggles when he needs to get the ball deep or outside the numbers. Garoppolo’s limitations were a reason why San Francisco drafted his eventual replacement in Trey Lance last spring and could end up dooming the 49ers the same way they did in the fourth quarter of the Super Bowl two years ago.

• Quote: “The culture of our team is never quit. We’ve been in good situations, bad situations over the years. One thing I can say is, even before Kyle and (GM) John (Lynch) got here, there was never any quit in us. When they got here, they implemented their culture. We don’t quit, no matter the situation, and we worry about the next snap.” — DE Arik Armstead.

• Why they’ll prevail: Dual-threat QB Jalen Hurts leads the league’s best rushing offense, but also has talented playmakers in WR DeVonta Smith and TE Dallas Goedert. Running the ball effectively with Hurts and a stable of productive backs, including Miles Sanders, Jordan Howard, Boston Scott and Kenny Gainwell, could keep Tom Brady and Tampa’s high-powered offense on the sideline. The Bucs can’t score as much if the Eagles control the clock and keep Brady off the field.

• Why they’ll derail: The Eagles were 0-6 against opponents that made the playoffs, 1-7 against teams that finished with a winning record. Rookie coach Nick Sirianni is coaching his first playoff game and Hurts, who played in big games in college, is starting for the first time in the postseason. These are not the ingredients for a deep playoff run.

• Quote: “I don’t remember,” Hurts, when asked his earliest recollection of Brady.