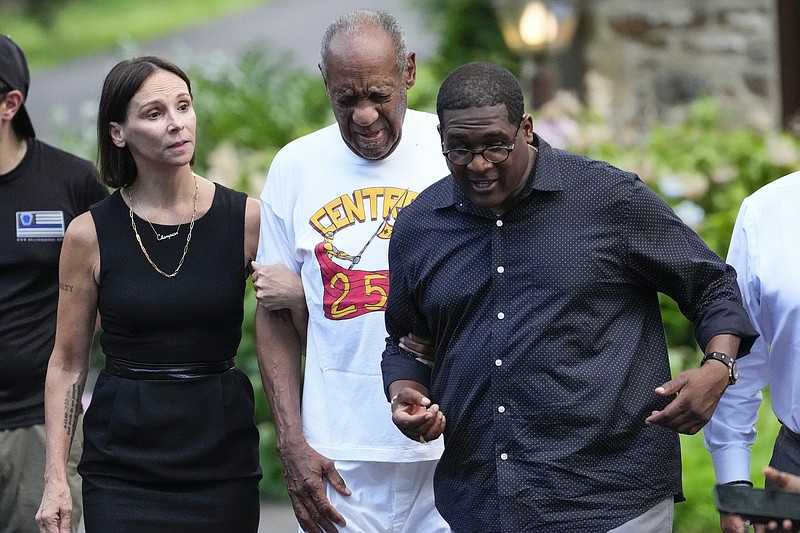 FILE - Bill Cosby, center, and spokesperson Andrew Wyatt, right, and attorney Jennifer Bonjean, left, approach members of the media gathered outside Cosby's home in Elkins Park, Pa., on June 30, 2021. An Illinois judge could be facing discipline after he mocked Bonjean in comments that he apparently did not realize were being broadcast live on YouTube. (AP Photo/Matt Slocum, File)

CHICAGO (AP) -- An Illinois judge could be facing discipline after he mocked an attorney in comments he apparently did not realize were being broadcast live on YouTube.

Cook County Judge William Raines made the comments about attorney Jennifer Bonjean after she appeared before him during a court call. Bonjean -- a New York-based attorney who has represented a number of high-profile clients around the country, including Bill Cosby -- was before Raines in a case in which she is seeking to have a client's 1996 murder conviction thrown out.

"Can you imagine waking up next to her every day? Oh, my God!" Raines said in a conversation with two assistant state's attorneys and an assistant public defender in the courtroom after Bonjean had left, according to a transcript of the exchange. "I couldn't have a visual on that if you paid me. "

A short time later, Raines, whose court call was carried live as many hearings have been during the COVID-19 pandemic, apparently realized that his comments were still being broadcast.

"Ohh, wait ... Media streaming live on YouTube? What's up with this?" the judge said before the video ends.

She is a familiar presence in Chicago. Her clients have included men who alleged they were tortured by police, including one whose rape conviction was overturned and later awarded $5.2 million by a jury and another won a multimillion settlement from the city after a detective allegedly framed him for murder.

In a hearing Thursday before another judge, Bonjean asked the video be preserved so she could lodge a complaint with the state's Judicial Inquiry Board, which reviews judicial misconduct allegations. Also, Chief Judge Timothy Evans scheduled a hearing next Tuesday of the court's executive committee made up of himself and the court's presiding judges, according to a court spokeswoman. Such hearings often result in a judge being placed on administrative duties until a full investigation is conducted.

"There was an incredible casual nature of these conversations that certainly suggests this is not the first time this kind of banter went on," Bonjean told Judge Erica Reddick, who agreed to preserve the video.

Bonjean called the remarks "sexist and offensive" and said the two prosecutors who took part in the conversation as well as Cook County State's Attorney Kim Foxx have apologized.

A spokeswoman for Evans' office said Raines could not comment because it involves a pending case.