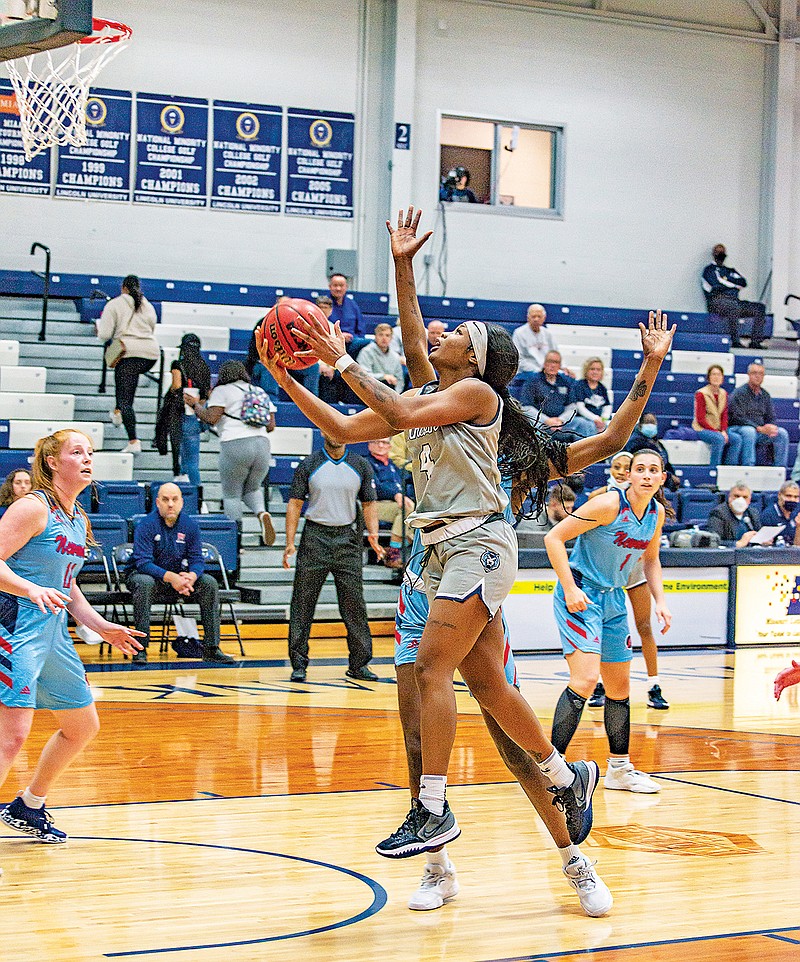 Lincoln’s Imani Jones drives to the basket for a layup during Thursday’s game against Newman at Jason Gym. (Ken Barnes/News Tribune)

The Lincoln Blue Tigers’ men’s basketball team will finally play their second game of 2022 this afternoon when they host the Central Oklahoma Bronchos in MIAA action at Jason Gym.

The Lincoln men have had three MIAA games postponed due to COVID-19 protocols since falling 79-76 to Emporia State at home Jan. 1. The latest of the postponements was Thursday night’s scheduled home game against Newman, who had to call the game off due to the protocols. The game has yet to be rescheduled.

Central Oklahoma figures to be a tough test as Lincoln returns to the court after its extended break.

The Bronchos, ranked No. 22 in the country in the NABC Division II poll, enter this afternoon’s contest on a 10-game winning streak. In the stretch, the Bronchos are outscoring their opponents by nearly 18 points per game.

Central Oklahoma is coming off an 82-60 victory Thursday night against Central Missouri in Warrensburg.

The Bronchos held a slim 33-31 lead at the half before outscoring the Mules 49-29 in the final 20 minutes. Central Oklahoma had a 17-0 run in a little less than four minutes in the second half.

Jaden Wells (6-foot-1, fr. guard) hit seven 3-pointers and totaled a game-high 26 points in the victory, 11 more than his season average. The Bronchos were 12-of-22 on 3-pointers in the win.

Isaiah Wade tops the Bronchos in scoring at 19.1 points per contest, followed by Camryn Givens at 15.3 points. Callen Haydon is the fourth Broncho averaging in double figures at 13.0.

Tre’vion Crawford tops Lincoln in scoring at 10 points per game. Chuck Wilson and Derrick Woods are both totaling 9.5 points per game for the Blue Tigers.

In the first game of the day, the Lincoln women will look to build off their first conference win of the season when they host the Bronchos.

Lincoln is coming off a 51-50 victory Thursday night against Newman at Jason Gym, as Niyah Jackson scored the game-winner for the Blue Tigers, hitting a layup with :01.6 remaining.

Jackson finished with 14 points, six assists and six rebounds in the victory.

Central Oklahoma is coming off an 88-80 loss Thursday night against Central Missouri in Warrensburg that snapped a three-game winning streak.

Kelsey Johnson (6-3 sr., forward), a three-time MIAA player of the week selection this season, tops the Bronchos at 20.1 points and 9.9 rebounds per game. Alayzha Napp is next at 10.8 points for Central Oklahoma.

Central Oklahoma has won the last 10 women’s meetings with the Blue Tigers.