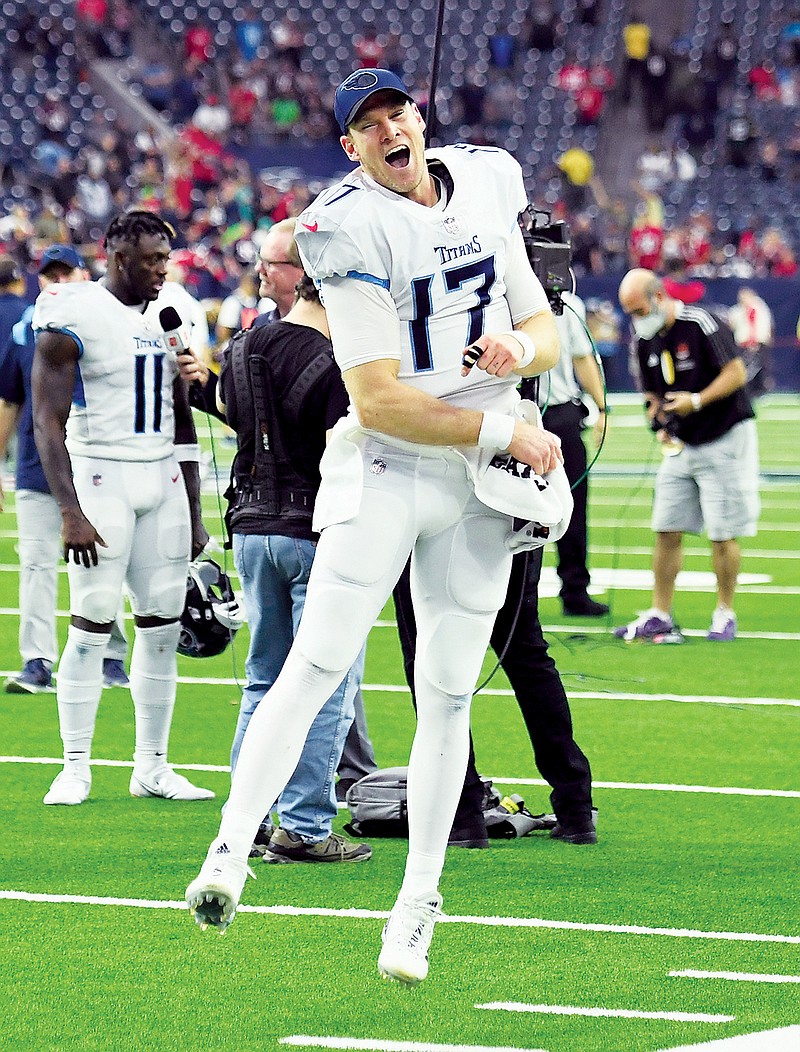 No team ever needed a first-round bye in the playoffs more than the Tennessee Titans, who used a record 91 players this season, most ever in a non-strike season.

The Titans (12-5) edged perennial power Kansas City (12-5) for the top seed and the lone bye in the AFC playoffs.

The week off also gives running back Derrick Henry, the 2020 AP NFL Offensive Player of the Year, more time to practice for an expected return for the divisional round. He broke his right foot and underwent surgery more than two months ago and started practicing with the Titans this month.

Despite playing in just eight games, Henry still finished the season ninth in the NFL in rushing with 937 yards after leading the league each of the past two seasons.

The wild-card round begins today with the Raiders at the Bengals and the Patriots visiting AFC East foe Buffalo. On Sunday night, the Steelers visit the Chiefs.

AP Pro32 Ranking: No. 4. Last Lombardi: none. Last year: No. 4 seed, lost to Ravens 20-13 in wild-card round. This year: Third consecutive trip to the playoffs. Second straight AFC South title.

• Why they’ll prevail: The Titans are healthier than they’ve been all season. Although they didn’t capitalize on their previous No. 1 seeds in 2000 and 2008, when they lost to the Ravens in the divisional round both years, they are 8-0 in the past four seasons under coach Mike Vrabel when having at least nine days to prepare for an opponent. QB Ryan Tannehill is coming off his best game of the season, matching his career high with four TD passes. Not only is Henry preparing to return, but WRs Julio Jones and A.J. Brown are hitting stride after battling through injuries. Only four NFL teams allowed fewer points than the Titans’ revamped defense, and their 43 sacks more than doubled their total from 2020.

• Why they’ll derail: The Titans can be their own worst enemy. The offense starts too slowly, and they settle for too many field goals. K Randy Bullock has missed six field-goal attempts between 40 and 49 yards. Among playoff teams, only the Niners (minus-4) and Raiders (minus-9) have a worse turnover margin than the Titans’ minus-3.

• Why they’ll prevail: Patrick Mahomes. Do you need another reason? His prolific passing ability fundamentally changed the way defenses play the Chiefs, forcing them to use two-deep shell coverages on just about every snap. Mahomes still threw for nearly 5,000 yards with 37 TD passes. WR Tyreek Hill took advantage of all those throws under the coverage to set a franchise record with 111 receptions, and TE Travis Kelce had his fourth straight 1,000-yard season.

• Why they’ll derail: The Chiefs defense, which has held five consecutive opponents to fewer than 10 points at Arrowhead Stadium, was an abject failure through the first six weeks of the season. They ranked near the bottom of the league in just about every statistical category. And while they have played like an entirely different team the past three months, there were signs of cracks in a late-season loss to Cincinnati that cost them a first-round bye and a nip-and-tuck win at Denver to end the regular season.

Quote: “There’s a lot of teams that won’t be out there this week. It’s a blessing, a blessing to be here in Kansas City and have the success we’ve had over my nine years in the league, and we just try to take advantage of those opportunities, because not everybody gets them.” — Kelce.

• Why they’ll prevail: It’s not just the Josh Allen Aerial Show anymore. While Allen became Buffalo’s first player to top 4,000 yards passing and throw at least 30 TDs twice in his career, the Bills’ late-season run to clinch the AFC East was partially fueled by a re-emphasis on running the ball. After managing 495 yards rushing and two scores in Buffalo’s first 12 games, Devin Singletary combined for 375 yards rushing and five touchdowns (including one receiving) over the past five. The Bills are 10-1 when running for a touchdown and 11-2 when topping 100 yards rushing. Add in a Bills defense which allowed the fewest total yards, fewest passing yards and fewest points in the NFL and combined for 19 sacks over a season-ending four-game winning streak.

• Why they’ll derail: The Bills padded their win total against non-playoff opponents and either rookie or journeymen QBs. Buffalo finished 7-2 against QBs with 16 or fewer career starts, including splitting two games against New England’s Mac Jones. Buffalo went 4-4 against more experienced starters, with losses against Tom Brady, Ben Roethlisberger, Ryan Tannehill and Carson Wentz. On offense, slow starts have been the recipe for failure. Buffalo has overcome a second-half deficit just once, in a 29-15 win over the Falcons on Jan. 2.

Quote: “My playoff message is we’re going to do what we always do. We’re coming out here, we’re playing fast and playing physical, especially up front. We hear all the chirping. We hear guys talking about us and all that. It ain’t nothing. We’re going to strap it up and let the pads talk come Saturday.” — DE Jerry Hughes.

• Why they’ll prevail: Dynamic young stars aren’t aware and don’t care about the team’s playoff futility in the past three decades (zero wins in the past seven postseason appearances). Second-year QB Joe Burrow is unflappable and does whatever it takes to move the chains, even if it means taking big hits. He and rookie WR Ja’Marr Chase, his national championship teammate at LSU, shattered a host of franchise records. Chase and second-year WR Tee Higgins are masterful at 50-50 balls. Pro Bowl RB Joe Mixon is a powerful, relentless runner.

• Why they’ll derail: Protecting Burrow has been an issue all season. Injuries have bitten into the offensive line depth, and the loss of veteran tackle Riley Reiff to an ankle injury last month was a big hit. Burrow was sacked a league-high 51 times and chances are he’ll be on the run again in the playoffs, which could force him into critical mistakes. The defense was 26th in the league against the pass.

Quote: “The amount of time, the amount of hours spent away from your family and then finally to have some success, to have something to show for it, it’s really cool,” — S Jessie Bates III on the Bengals’ division title after finishing in the AFC North basement in each of his first three seasons.

• Why they’ll prevail: The strength of the Raiders all season has been a defensive line that has put relentless pressure on quarterbacks led by edge rushers Maxx Crosby and Yannick Ngakoue. Crosby led the NFL in pressures with 101, according to Pro Football Focus, and Ngakoue had a team-high 10 sacks. If they can maintain that level of play, it should take pressure off the secondary and keep the game close enough for Derek Carr and the offense, as well as clutch kicker Daniel Carlson, to pull games out at the end.

• Why they’ll derail: The Raiders rebuilt their O-line this offseason and it hasn’t paid off. LT Kolton Miller has been a rock all season and C Andre James has improved. But rookie RG Alex Leatherwood, RT Brandon Parker and LG John Simpson have struggled both in run and pass blocking for most of the season. If that doesn’t improve, the Raiders will have a tough time putting up enough points to compete with some of the high-powered offenses in the postseason.

Quote: “Obviously, it’s something I’ve dreamed of since I was drafted. That’s all I want to do is get to the playoffs and try and win a championship.” — Carr on his first playoff appearance in his eight-year career.

• Why they’ll prevail: The Patriots spent exactly one season out of the playoffs following Tom Brady’s departure to Tampa Bay. Bill Belichick made the bold move to name rookie first-round pick Mac Jones the starting QB after he beat out 2020 starter Cam Newton in training camp. Jones took his lumps with the Patriots starting 2-4. But he grew up a lot during a subsequent seven-game winning streak. He also is playing alongside a defense that allowed just 17.8 points per game, ranking second in the NFL. The Patriots are tied for third in the NFL with 30 takeaways. They also have one of the league’s top ballhawks in CB J.C. Jackson with an AFC-best eight interceptions. LB Matt Judon has also been a stellar addition in his first season in New England, leading the team with 12½ sacks.

• Why they’ll derail: As strong as the defense has played, the Patriots also have had a propensity to fall behind early in games. They are 8-1 this season when scoring points in the first quarter, but just 2-6 when they fail to do so. It will be a lot to ask a rookie QB in his first trip to the postseason to lead the team back if they fall behind.

Quote: “All we wanted was a ticket to the dance. We got that. We’re in the playoffs. And now we gotta go make it happen.” —Judon.

• Why they’ll prevail: The Steelers may be the longest shot in the playoff field but in Roethlisberger they have a veteran leader who — while hardly in his prime at 39 and in his 18th and likely final season — has two Super Bowl rings. The Steelers also have perhaps the most disruptive defensive player in the league in OLB T.J. Watt, whose 22½ sacks tied Hall of Famer Michael Strahan’s single-season record. If Roethlisberger can summon one last bit of magic and Watt’s play can cover up some serious warts on a defense that ranks last against the run, maybe the Steelers can carve out a path to the Super Bowl much as they did 16 years ago when they won the franchise’s fifth Lombardi Trophy as a sixth seed.

• Why they’ll derail: The 2005 group happened to have the NFL’s third-ranked defense to turn to when things got tight. Not so much this time around. Only eight teams gave up more yards than the Steelers in 2021, the franchise’s worst performance in more than 30 years. Combine that with an offense that can be painful to watch at times as it tries to dink-and-dunk opponents to death and there’s a reason Pittsburgh is the longest shot in the 14-team playoff field.

Quote: “I’ve been in a lot of these games where the team that makes the fewest mistakes is going to win. I just try and tell those guys that listen, we got to go out there and you got to play free and have fun, play football, but understand that it does even get a little bit faster and the intensity does pick up,” Roethlisberger, who’s making his 12th trip to the playoffs, said.