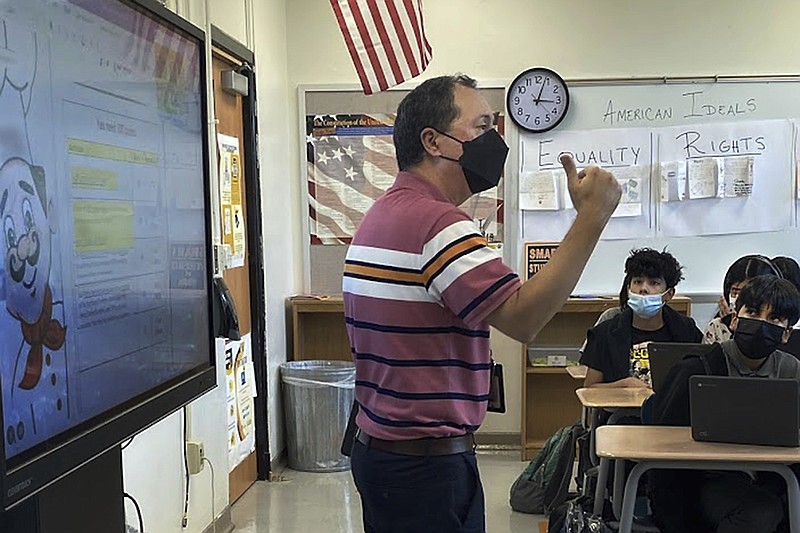 This photo shows Daniel Santos, a middle school history teacher during class, in Houston, in November, 2021. Teachers around the U.S. are confronting classrooms where as many as half of students are absent. That's because they have been exposed to COVID-19 or their families kept them at home out of concern about the surging coronavirus. F (Courtesy Daniel Santos via AP)

Teachers around the U.S. are confronting classrooms where as many as half of students are absent because they have been exposed to COVID-19 or their families kept them at home out of concern about the surging coronavirus.

The widespread absences have only added to the difficulty of keeping students on track in yet another pandemic-disrupted school year. In the nation's largest district, attendance has been so low that New York City Mayor Eric Adams on Wednesday reversed an earlier pledge to keep children in schools and said he would consider allowing a return to some form of virtual instruction.

"This is really taking a toll on the learning. If you have three kids in your class one day and you're supposed to have 12, you have to reteach everything two weeks later when those kids come back," said Tabatha Rosproy, a teacher in Olathe, Kansas, and the 2020 national Teacher of the Year.

Some of the country's biggest school systems report absentee rates around 20 percent or slightly more, with some individual schools seeing far higher percentages of missing students.

The schools in Clark County, Nevada, which includes Las Vegas, typically have 90 percent attendance, but that figure has dropped to 83 percent. In Seattle, attendance has averaged 81 percent since the return from winter break. Los Angeles public schools marked about 30 percent of the district's 600,000-plus students absent Tuesday, the first day back after the break.

In New York, about 76 percent of the city's roughly 1 million public school students were in class Wednesday, with some schools reporting well over half of their students out.

Adnan Bhuiyan, 17, has at times been one of seven or eight students in classes that normally have 30 at the Brooklyn Latin School. He spent much of the first week back from break in free periods, wondering why he was there.

Students given take-home COVID-19 tests have been taking them and testing positive at school, he said, and many are nervous about being exposed.

"Part of me was like, why are we sitting here doing nothing the whole day. Why can't we just stay home" and learn remotely, he said. "The other part of me knows that the mayor wants to keep the school open for certain reasons, and I can understand that. But the more and more we went through it, I just kept thinking at this point it's a waste of time for everyone because we're not learning anything."

As the highly contagious omicron variant causes teacher shortages, some schools have shifted temporarily to remote learning. Out of the roughly 100,000 public schools in the U.S., nearly 4,200 were closed to in-person learning by midweek, according to the data-tracking site Burbio.

President Joe Biden has stressed the importance of keeping schools open for in-person learning. The White House on Wednesday announced a monthly supply of 5 million rapid tests and 5 million lab-based PCR tests that schools can use for test-to-stay programs intended to lessen disruptions.

The absences leave teachers wrestling with whether to forge ahead with lessons and how to help students left behind.

Daniel Santos, a history teacher, said about half his students were absent when classes resumed after the winter break. Lately, about a third have been missing from his classes at Houston's Navarro Middle School, where more than 90 percent of students are Hispanic. Mindful of required standardized tests coming up in the spring, he has been creating video lessons for the missing students to review at home.

"It's like an avalanche. It just doesn't stop. Some students return. Then a new set of students are absent," he said.

The districtwide attendance rate in Houston has been around 90 percent this week.

Alejandro Diasgranados, a second-grade teacher in Washington, D.C., said his class has gone from perfect attendance most days to half empty some days since winter break. The absences add to pressure to help students who already were behind because of the pandemic, he said.

The challenge then falls to teachers "to almost individually prescribe each student with an academic learning plan," he said.