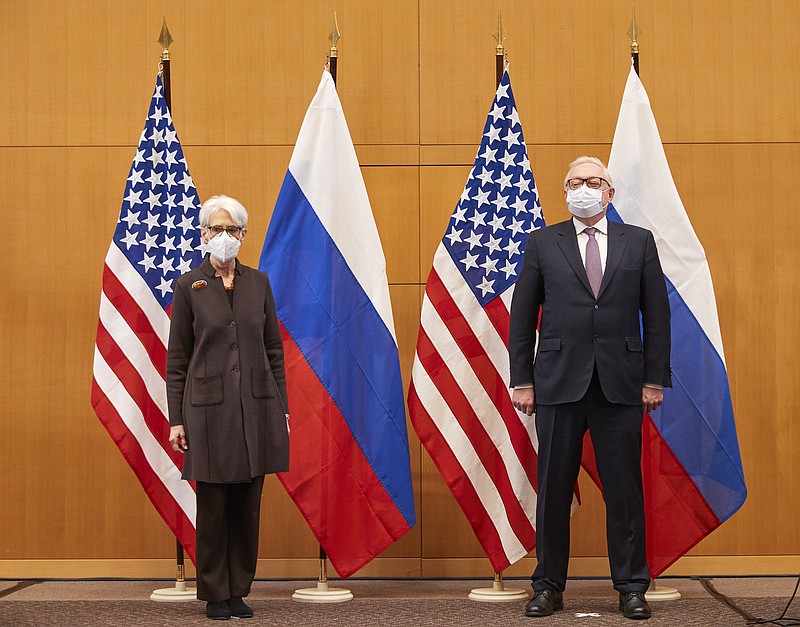 MOSCOW (AP) -- Russia raised the stakes Thursday in its dispute with the West over Ukraine and NATO's expansion when a top diplomat refused to rule out a military deployment to Cuba and Venezuela if tensions with the United States escalate.

Deputy Foreign Minister Sergei Ryabkov said he could "neither confirm nor exclude" the possibility of Russia sending military assets to Latin America if the U.S. and its allies don't curtail their military activities on Russia's doorstep.

"It all depends on the action by our U.S. counterparts," the minister said in an interview with Russian television network RTVI, citing Russian President Vladimir Putin's warning that Moscow could take unspecified "military-technical measures" if the U.S. and its allies fail to heed its demands.

U.S. national security adviser Jake Sullivan dismissed the statements about a possible Russian deployment to Cuba and Venezuela as "bluster in the public commentary."

Ryabkov led a Russian delegation in talks with the U.S. on Monday. The negotiations in Geneva and a related NATO-Russia meeting in Brussels took place in response to a significant Russian troop buildup near Ukraine that the West fears might be a prelude to an invasion.

Russia, which annexed Ukraine's Crimea Peninsula in 2014, has denied having plans to attack the neighboring country. The Kremlin reacted to the suggestion by accusing NATO of threatening its territory and demanding the military alliance never embrace Ukraine or any other ex-Soviet nations as new members.

Washington and its allies firmly rejected the demand this week as a nonstarter, but the NATO and Russian delegations agreed to leave the door open to further talks on arms control and other issues intended to reduce the potential for hostilities.

Speaking to reporters in Washington, Sullivan said "allied unity and transatlantic solidarity were on full display and they remain on full display" during this week's talks with Russia, which he described as "frank and direct."

"We stuck to our core premise of reciprocity," the national security adviser said. "We were firm in our principles and clear about those areas where we can make progress and those areas that are non-starter."

Sullivan noted no further talks have been scheduled, but "we're prepared to continue with diplomacy to advance security and stability in the Euro-Atlantic."

"We're equally prepared if Russia chooses a different path," he added. "We continue to coordinate intensively with partners on severe economic measures in response to a further Russian invasion of Ukraine."

Asked about Ryabkov keeping the door open to basing troops and equipment in Latin America, Sullivan responded: "I'm not going to respond to bluster in the public commentary."

He noted the issue wasn't raised during this week's talks and added "if Russia were to move in that direction, we would deal with it decisively."

Ryabkov last month compared the current tensions over Ukraine with the 1962 Cuban Missile Crisis -- when the Soviet Union deployed missiles to Cuba and the U.S. imposed a naval blockade of the island.

That crisis ended after U.S. President John F. Kennedy and Soviet leader Nikita Khrushchev agreed that Moscow would withdraw its missiles in exchange for Washington's pledge not to invade Cuba and the removal of U.S. missiles from Turkey.

Putin, in seeking to curtail the West's military activity in Eastern Europe, has argued NATO could use Ukrainian territory to deploy missiles capable of reaching Moscow in just five minutes. He warned Russia could gain a similar capability by deploying warships armed with the latest Zircon hypersonic cruise missile in neutral waters.

Soon after his first election in 2000, Putin ordered the closure of a Soviet-built military surveillance facility in Cuba as he sought to improve ties with Washington. Moscow has intensified contacts with Cuba in recent years as tensions with the U.S. and its allies mounted.

In December 2018, Russia briefly dispatched a pair of its nuclear-capable Tu-160 bombers to Venezuela in a show of support for Venezuelan President Nicolas Maduro amid Western pressure.

Ryabkov said a refusal by the U.S. and its allies to consider the key Russian demand for guarantees against the alliance's expansion to Ukraine and other ex-Soviet nations makes it hard to discuss the confidence-building steps that Washington said it's ready to negotiate.

"The U.S. wants to conduct a dialogue on some elements of the security situation ... to ease the tensions and then continue the process of geopolitical and military development of the new territories, coming closer to Moscow," he said. "We have nowhere to retreat."

"We are constantly facing a provocative military pressure intended to test our strength," he said, adding he wondered how Americans would react "if our bombers fly within 15 kilometers off some U.S. bases on the East or the West Coast." 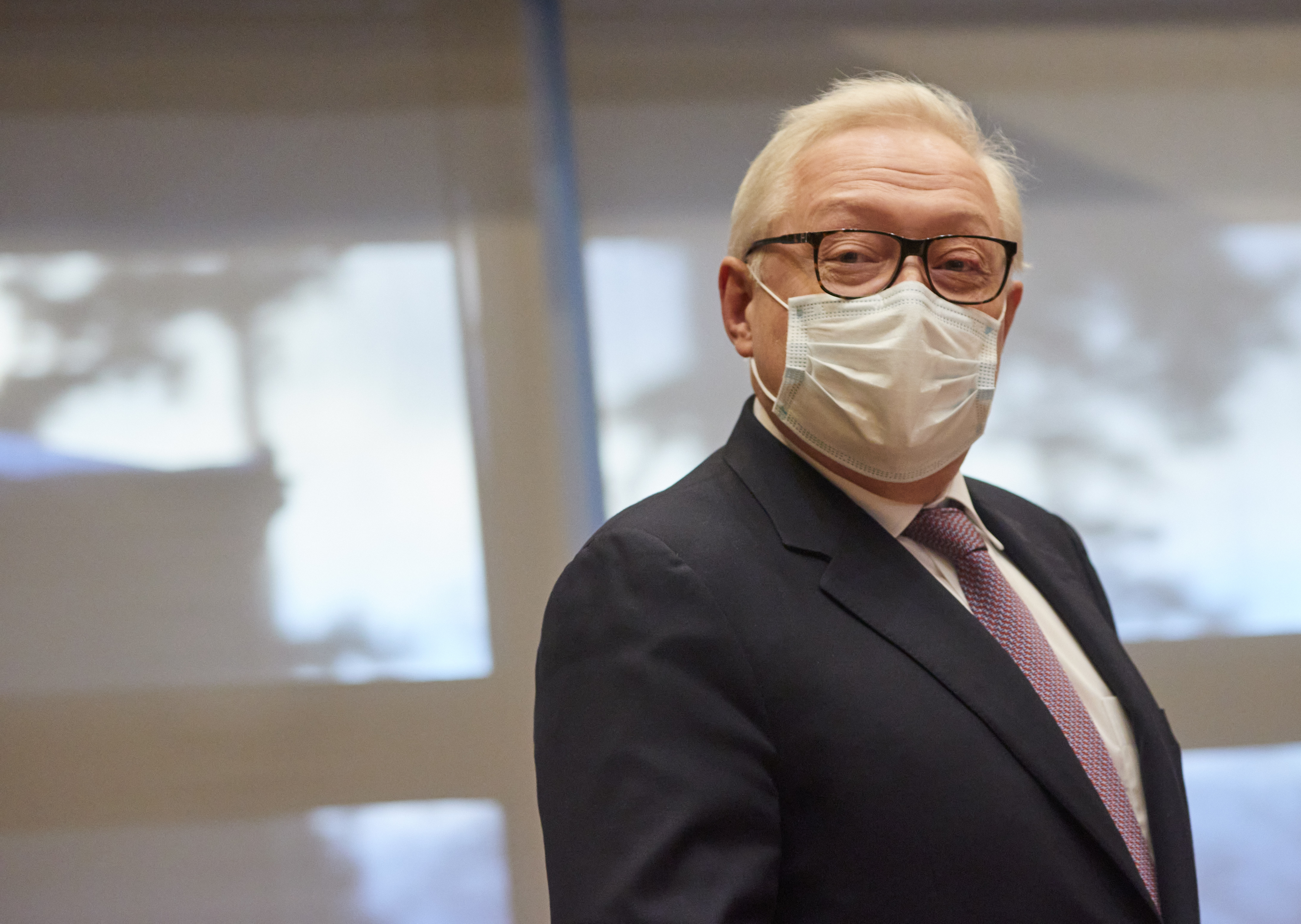 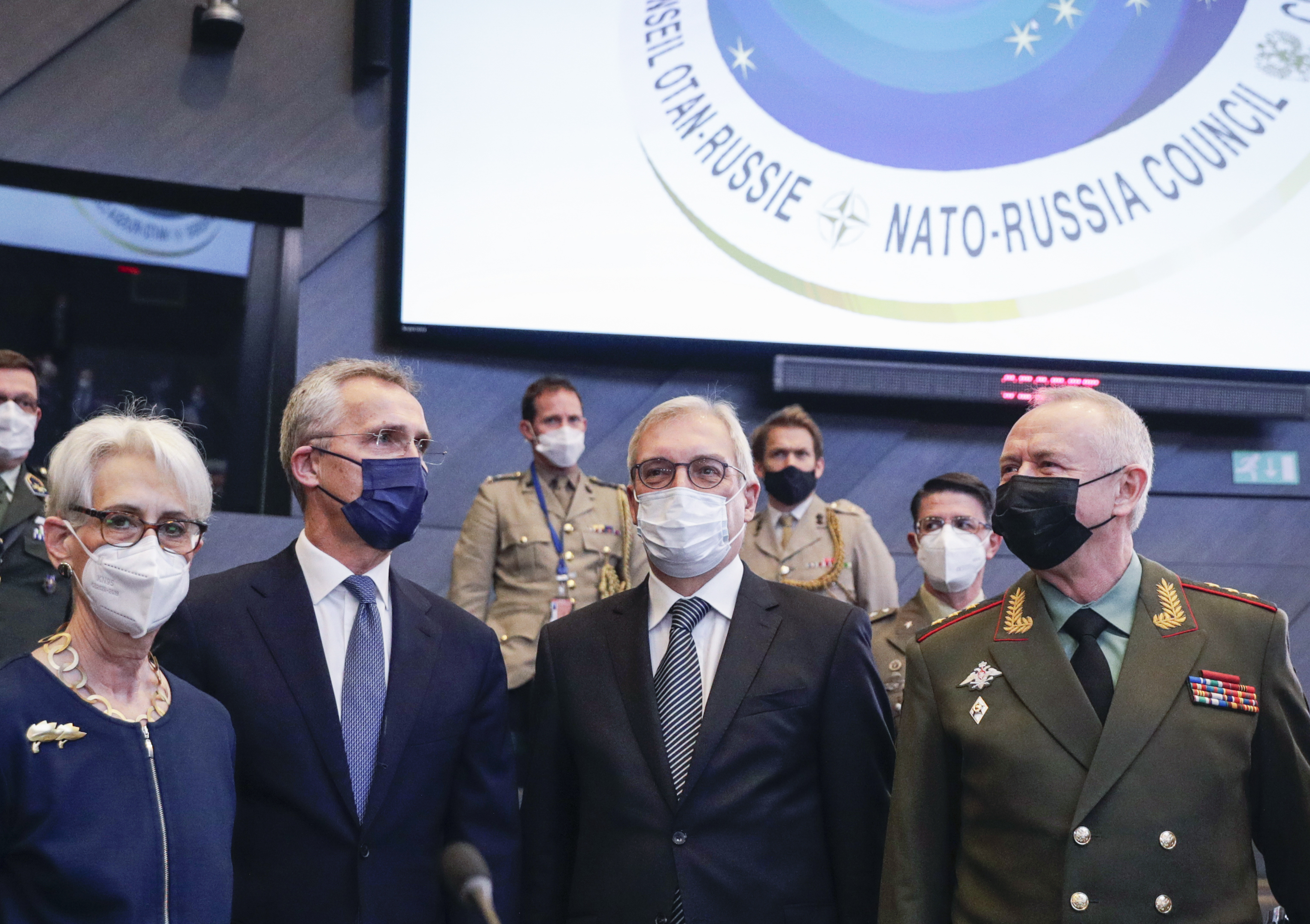 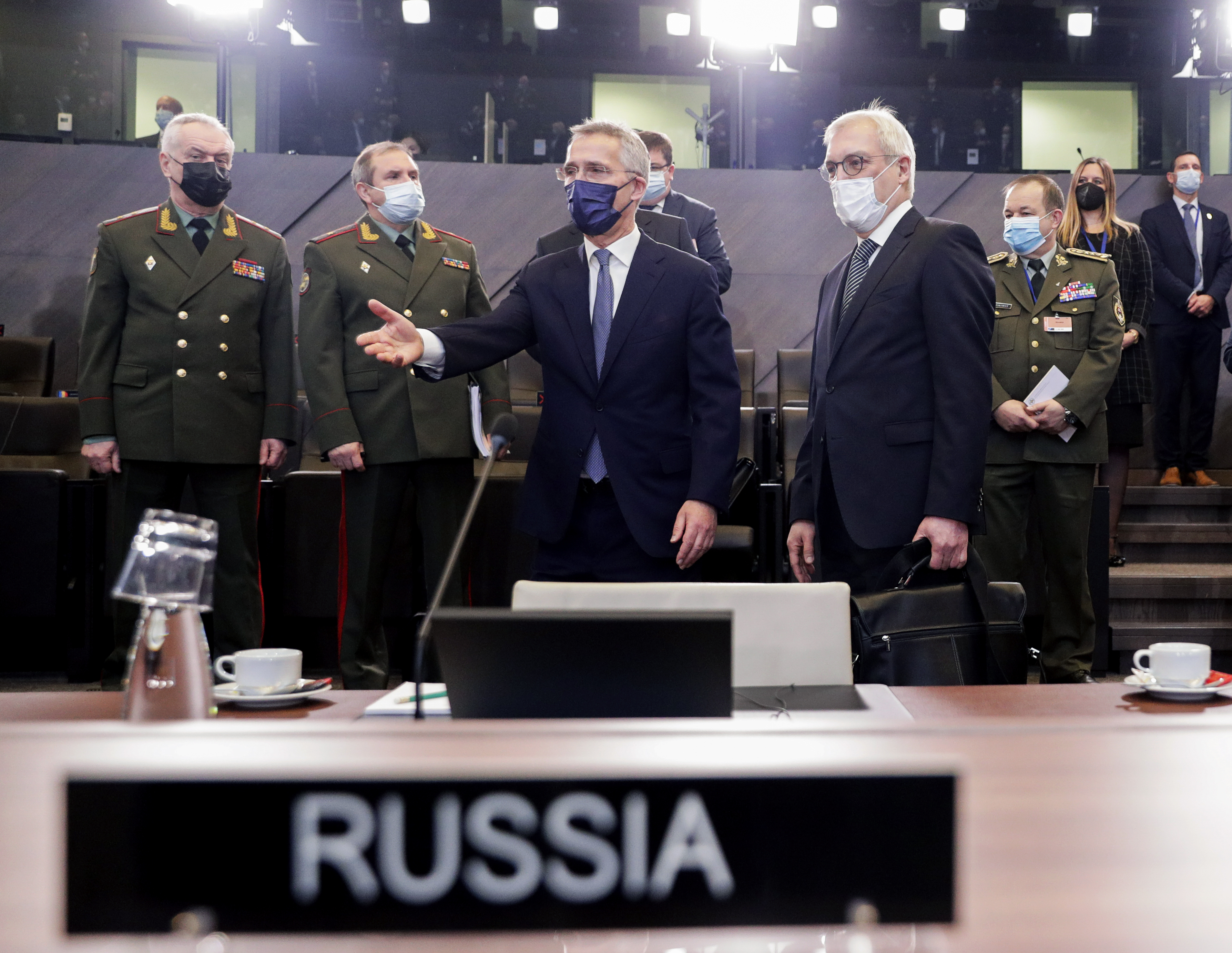 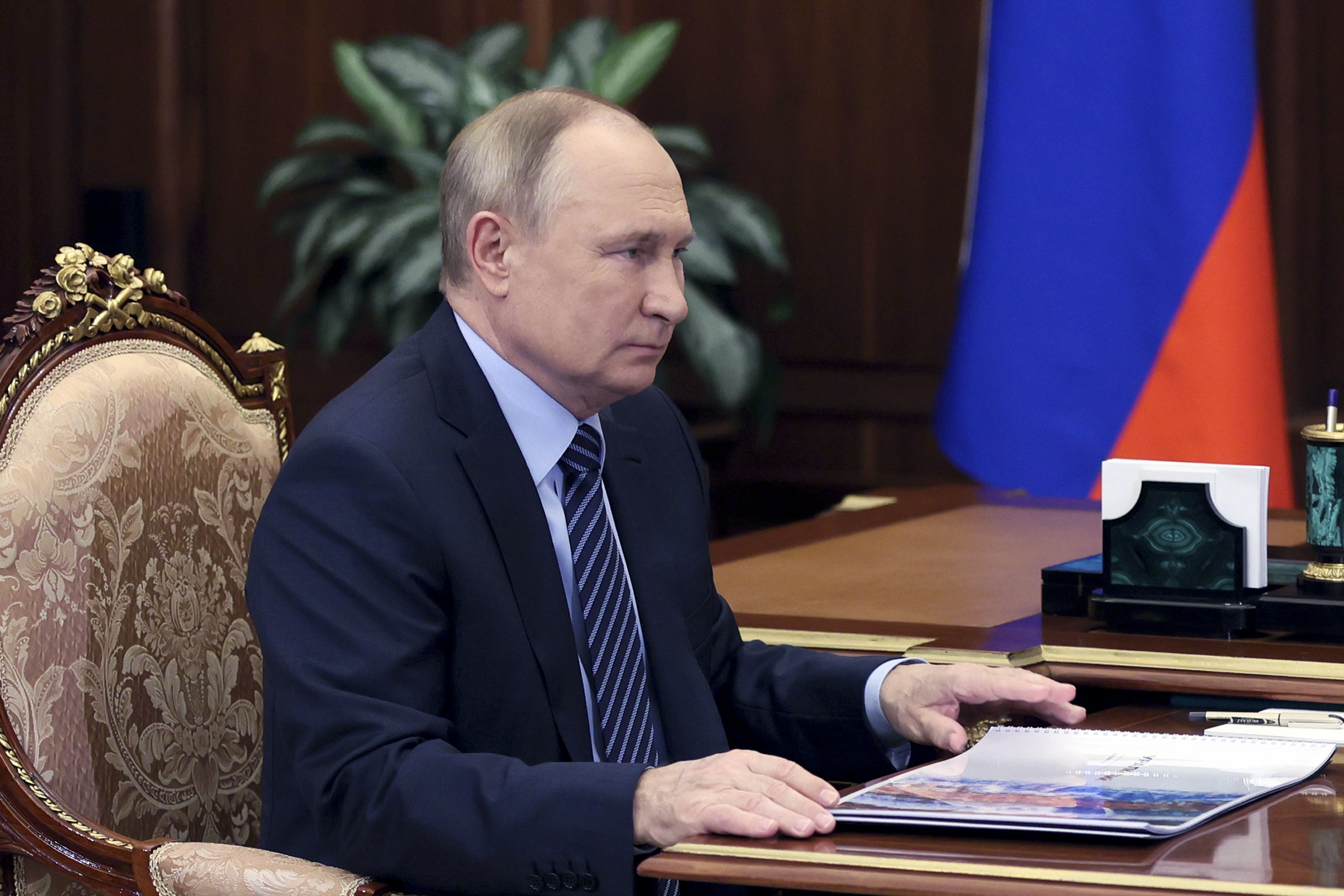 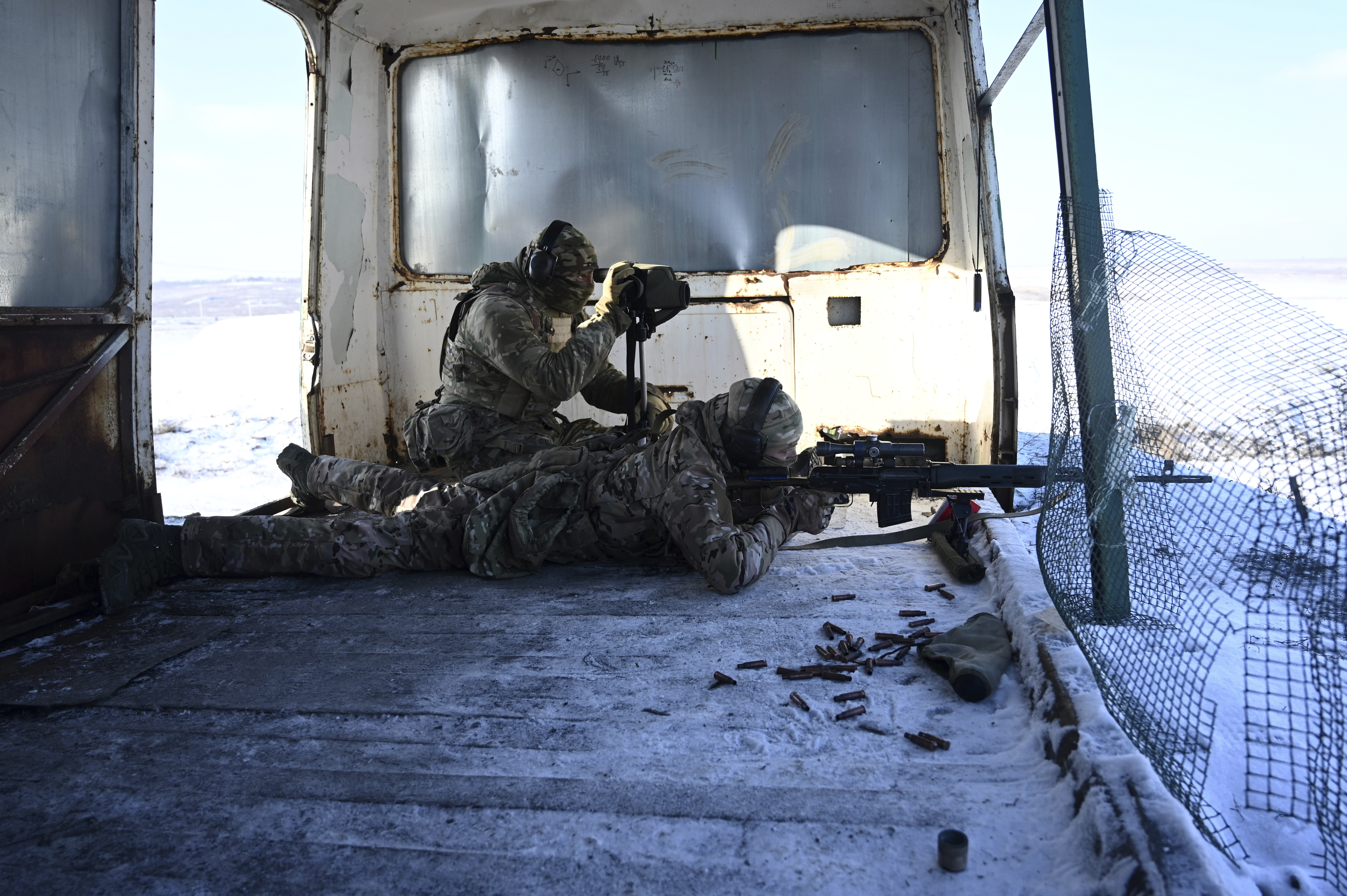 Russian soldiers take part in drills at the Kadamovskiy firing range in the Rostov region in southern Russia, Thursday, Jan. 13, 2022. Russia has rejected Western complaints about its troop buildup near Ukraine, saying it deploys them wherever it deems necessary on its own territory. (AP Photo)