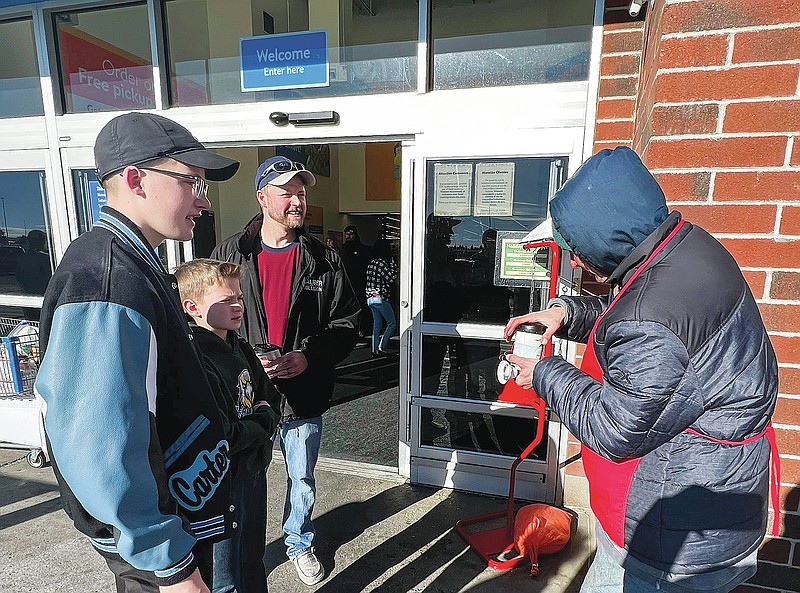 Adam Van Der Hoeven and his two sons Carter Van Der Hoeven and Cyler Van Der Hoeven hand Salvation Army volunteer James Weber a hot coffee on Tuesday, Dec. 21, 2021, at the Police Department in downtown Cheyenne, Wyo. Carter, Cyler and their dad, Adam, have been working to do 25 acts of kindness during the month of December in honor of their late mother and wife who passed away earlier this year. (Rhianna Gelhart/The Wyoming Tribune Eagle via AP)

“The Salvation Army typically raises more around Christmas than any other time of year,” Mid-Missouri coordinator Major Curtiss Hartley said. “We still have time to meet the goal, but it is going to take a lot of effort and a personal visit from an angel or two.”

In Jefferson City, The Salvation Army provides a wide range of services to local people facing poverty. Services include The Salvation Army Center of Hope, which is the only homeless shelter in the Jefferson City area serving meals to the hungry. They also operate a thrift store on Michigan Street that offers clothing and other merchandise at low prices.

The Salvation Army raises money surrounding the Christmas season through their red kettle campaign, along with direct mail and community events as well as people stopping by with checks and cash donations to the Army offices on Jefferson Street. Officials said this year the individual donations ranged from pennies to five-figure checks.

Donations can be mailed or personally delivered to: The Salvation Army, 927 Jefferson St., Jefferson City, MO, 65101, or online at wwsalvationarmyjeffcity.org.