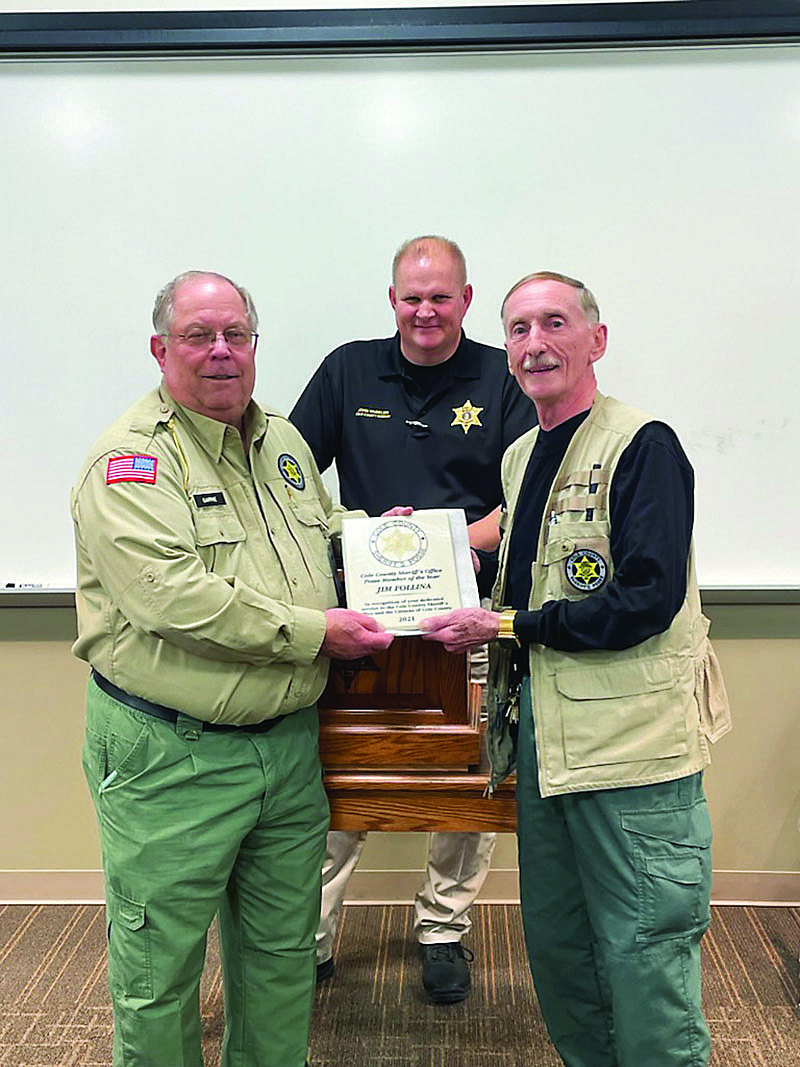 A volunteer with the Cole County Sheriff’s Posse whose service in helping local law enforcement efforts dates back more than 30 years is being honored with an inaugural volunteer of the year award.

Posse member Jim Follina, whose work with local law enforcement dates back to 1990, will be the first recipient of the Cole County Sheriff’s Posse Volunteer of the Year award.

In 1990, Jefferson City Police Department Chief Gary Kempker invited Follina to serve on a committee of six residents to assist in developing and overseeing a citizens program for the JCPD. As the chairman of that committee, Follina supervised the Explorers Program for more than 26 years. The program is aimed at young people interested in a career in law enforcement.

Unknown to many, Jim has also played the role of “McGruff the Crime Dog” at community events for many years where JCPD and Explorers helped serve.

In 2017, Jim joined the Posse as a volunteer and has been a key member of the sheriff’s office logistics team since then. During 2021, Follina volunteered more than 700 hours, usually donating three days a week helping out with the department’s logistics, which encompasses the tracking, supply and distribution of materials to the department’s employees and deputies.

Corp. Charlie Greatsinger, training officer for the sheriff’s department, said: “I don’t have adequate words to express our appreciation of his commitment to the sheriff’s office and his community. He always demonstrates a selfless willingness to volunteer and to assist others.”

Sheriff John Wheeler added, “Jim has proven to be an asset to our organization. His dedication towards assisting the Cole County Sheriff’s Department is exemplary. The hours he volunteers helps our department in more ways than he knows.”

Overall, 40 Posse members donate more than 1,800 hours annually to the Sheriff’s Department. The leader of the Posse, or adviser, is Greg Gafke. The adviser is appointed by the sheriff, who makes his choice from among the members of the Posse.

“We had a team leader meeting in November, and it was then that the idea was thrown out there that we should recognize Jim,” Gafke said. “Sheriff Wheeler liked the idea and ordered a plaque. Jim’s name is the first name displayed on it, and more names will be added.”

The plaque is hung in the sheriff’s office for all to see.

“Nobody has come close to the hours Jim puts in,” Gafke said. “He staffs the supply room three to four days a week. That has anything our deputies would need, and Jim knows where all that’s at. You’d probably have to pay a full-time salary to someone to do the job Jim volunteers to do in that position.”

Gafke said they want to present an award every year. While no one may equal the work Follina does, Gafke said, there are plenty of Posse members who go above and beyond to help the sheriff’s office. The 12-member Posse leadership team will make a selection based on how many hours a member has put in during the year.