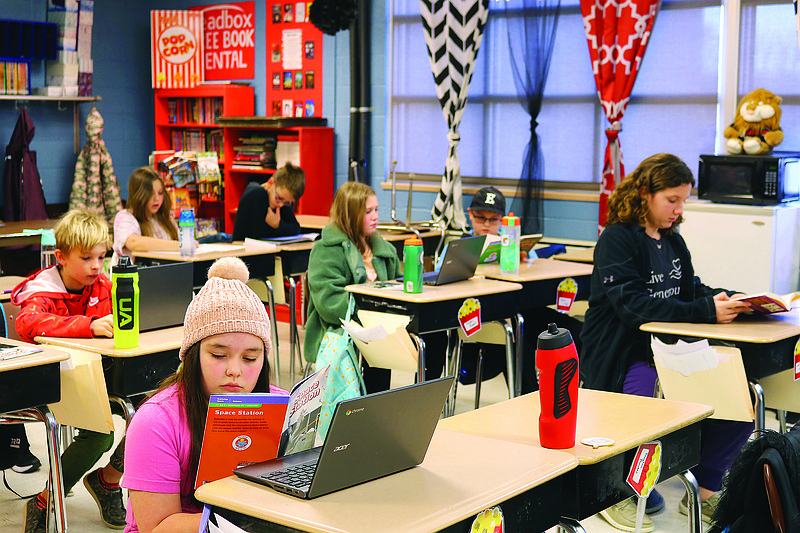 With the addition of 300 Chromebooks, 110 iPads and 15 hotspots, the Cole County R-5 School District in Eugene can expand learning outside the building.

Through the government’s Emergency Connectivity Fund, a special program to help schools and libraries stay connected during the pandemic, Cole R-5 has reached “1 to 1” status, meaning every student has access to a device.

“Because every student now has a device, it kind of opens the door for instruction to extend beyond the classroom,” Superintendent Charley Burch said. “In the past, anything that was technology- driven was kind of limited because devices never went home. We didn’t have enough.”

Burch said they heard about the fund and jumped into the process by sending out a s urvey to district families to assess need. The survey asked about the number of devices available to students at home and whether students had internet access at home.

Once the district knew what it needed, it sent in the application and was approved.

The Emergency Connectivity Fund covers laptops for up to $400 and hotspots for up to $250, meaning the only things the district had to pay for were cases for the Chromebooks and iPads and content filtering for the hotspots.

The new technology helps address some gaps. The hotspots are available for children to take home as needed if they don’t have Wi-Fi at home.

Kindergarten and first-graders will use the iPads, which will arrive later this month, and second- through 12th-graders use the Chromebooks. Depending on grade, some students are allowed to take them home, a process Burch said they are slowly integrating.

“Ultimately, the availability is for the teachers to send them home any time as needed,” Burch said.

“If we were to happen to go into a situation according to the pandemic that all of a sudden we’re out of school, the kids will now have devices at home to where we can continue instruction,” he said.

Last time the district closed for COVID-19, there were not enough devices for everyone, so teachers sent home paper packets for students, technology director Lynette Procter said. This will eliminate the need for those packets, as students can use Google Classroom at home.

Teachers also don’t have to check out Chromebooks from carts in their classrooms to students anymore, but can instead let the students take them with them throughout the day.

Fifth-grade teacher Clarissa Stokes said she’d been hoping for more Chromebooks since last year. She said her fifth- graders use them almost every day for reading, math and science research, and she plans to have the students do Chromebook activities with a substitute teacher later in the week.

As for the students, they were pretty excited to be handed Chromebooks.

“Whenever they got them last week, they were all walking out like they had gotten the best Christmas present ever,” Procter said. “They were just like walking out smiling like, ‘Oh my gosh, I get to take this, this is mine.’”