Effort to get new ambulance base progressing 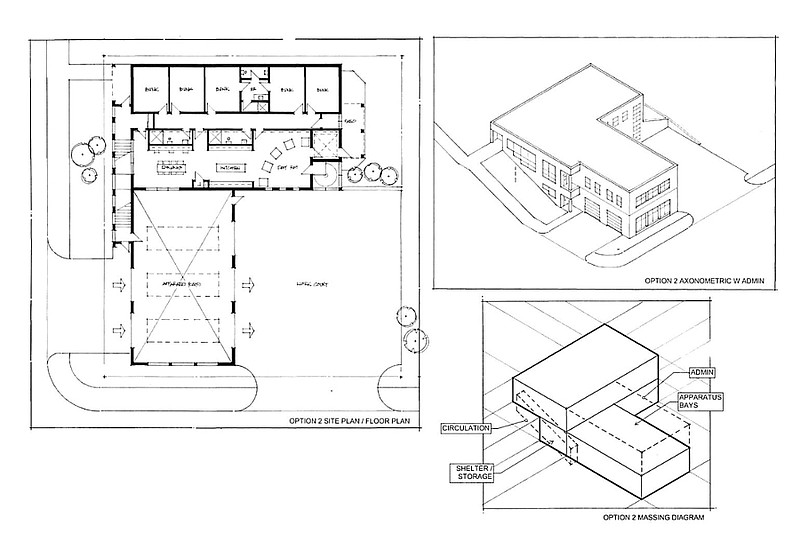 Above is an architect's floor plan for an ambulance station proposed for Cole County Emergency Medical Services at the corner of Adams and East McCarty streets in downtown Jefferson City. (submitted)

Cole County and Jefferson City are finalizing a memorandum of understanding that is needed in order to potentially make a downtown ambulance base a reality.

During the Tuesday meeting of the Cole County Commission, Western District Commissioner Harry Otto said the city and county should have the deal worked out in a week. The commission is working with Jefferson City to seek a Community Development Block Grant to be used to build the station.

Because the project would be located in the city, the city would apply for the grant on behalf of the county, which operates the EMS service. The city can apply for up to $2 million in block grants to the project. A preliminary engineering report by The Architects Alliance study, which was done to fulfill one of the CDBG application requirements, said the project would cost more than $2.8 million, with the grant paying the majority of the costs and the rest coming from funds out of the half-cent sales tax for the EMS service.

If the grant is approved, the city would be responsible for the oversight of the activities of the grant.

How soon the city and county could find out if the funding was awarded is unknown.

The proposed site for the station would be on a county- owned parking lot across from the county jail on Adams Street.

Currently, an ambulance is stationed in the county jail, but officials said creation of a downtown ambulance station would improve efficiencies and expand services.

The proposed two-level station with three bays would allow the EMS service to put two ambulances in operation in the downtown area 24 hours a day and seven days a week, Hoy said. He said the ambulance currently housed in the county jail helps control costs. However, due to the operations of the jail it can present challenges so it's not an ideal location.

Print Headline: Effort to get new &#0010;ambulance base progressing