Question for Fed: Has it waited too long to fight inflation? 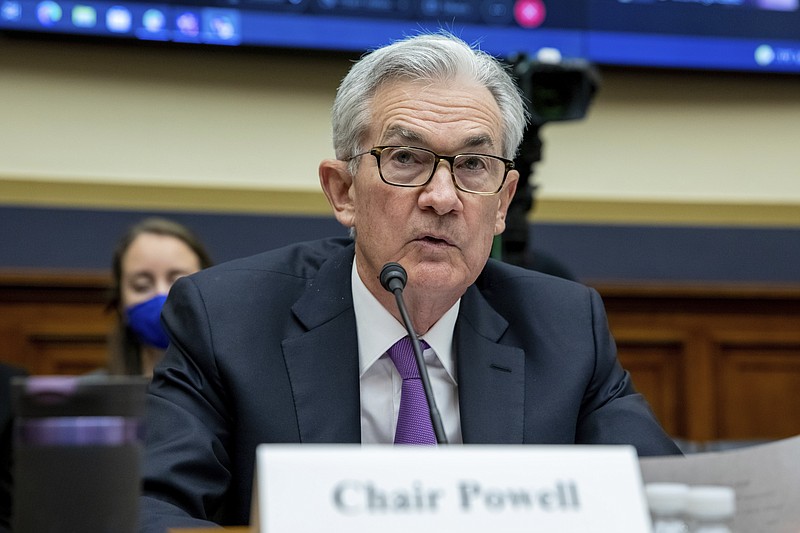 FILE - Federal Reserve Chairman Jerome Powell speaks to lawmakers during a House Committee on Financial Services hearing on Capitol Hill in Washington, Dec. 1, 2021. With inflation surging, unemployment falling and wages rising, some economists are warning that the Federal Reserve may have waited too long to reverse its ultra-low-rate policies &#x2014; a delay that could put the economy at heightened risk. (AP Photo/Amanda Andrade-Rhoades)

WASHINGTON (AP) -- With inflation surging, unemployment falling and wages rising, some economists are warning the Federal Reserve may have waited too long to reverse its ultra-low-rate policies -- a delay that could put the economy at heightened risk.

On Wednesday, the government is expected to report consumer prices jumped 7.1 percent during the past 12 months, which would be the steepest increase in decades. Fed Chair Jerome Powell is sure to be grilled on the issue during a Senate hearing today on his nomination for a second four-year term. Inflation has become the most serious threat to the economy, a growing worry for the financial markets and a major political problem for the Biden administration and Democrats in Congress.

While Powell has many defenders who applaud the Fed's willingness to keep interest rates low to help reduce unemployment after the pandemic recession, Friday's U.S. jobs report for December raised alarms. It showed another sharp drop in the unemployment rate, an unexpectedly large increase in hourly pay and chronic labor shortages.

Though lower joblessness and higher pay benefit workers, they can also fuel rising prices. The jobs report led many economists to forecast more interest rate hikes this year than they had previously predicted as the Fed scrambles to manage a rapidly shifting economy. The Fed is now widely expected to begin raising rates in March -- action that would, in turn, raise borrowing costs for many consumers and businesses.

By waiting as long as it has, the Fed might eventually be forced to accelerate its rate increases, effectively pressing harder on the economic brakes. Yet that could slow growth, disrupt financial markets and potentially cause a recession. Many past recessions have been caused by aggressive Fed rate hikes that were intended to combat or prevent inflation.

Last month, in a sharp pivot toward fighting inflation, the Fed signaled it expects to raise its short-term benchmark rate, currently near zero, three times this year. As recently as September, policymakers had been divided over whether to raise rates even once in 2022.

"There is a substantial risk that the Fed is sufficiently behind the curve that it will need to face the challenge of letting inflation remain persistently high or risk a recession," said Tim Duy, chief U.S. economist at SGH Macro Advisors.

Stocks have tumbled and bond yields have surged since the minutes of the Fed's December meeting, released last week, showed officials likely to move more faster to tighten credit.

Many economists now expect the Fed to raise its key rate at least four times this year. And according to the minutes of its December meeting, Fed officials are also considering moving faster to shed the nearly $8.8 trillion in Treasury and mortgage bonds they hold, a move that would also tighten credit. The minutes indicated the policymakers could start letting those holdings decline, as the securities mature, as soon as after the Fed's first rate hike.

Yet on Friday the government reported the unemployment rate sank in December to 4.2 percent from 3.9 percent in November and is down from 6.7 percent a year earlier -- the fastest 12-month drop in the jobless rate since records began in 1948. (It followed the largest increase in unemployment on record in 2020.)

With the number of unemployed dwindling, businesses have been forced to raise hourly pay to keep and attract workers. In the final three months of 2021, wages jumped at a 6.2 percent annual rate. And for workers in restaurants, hotels and casinos, pay soared 14.1 percent in December compared with a year ago.

"Normally, the Fed would have raised rates long before," Duy said. "The fact that we've barely started suggests the Fed has misjudged how quickly the economy was going to come back online."

Some economists, though, defend the Fed's approach. They echo the central bank's view inflation will likely decline this year as the pandemic wanes. The spike in spending on goods, from cars to Pelotons, will fade as Americans switch back to spending on travel and restaurant meals, according to this view. That will allow supply-chain bottlenecks to unravel, thereby reducing goods prices.

And, they argue, the Fed's willingness to keep rates low, even as the economy recovered, helped support a faster pace of growth and hiring, particularly compared with the grindingly slow recovery after the 2008-09 recession.

"The Fed is closer to on schedule than they are to making a mistake," said Skanda Amarnath, executive director of Employ America. "It's easy to Monday morning quarterback to say that the Fed should have done more last year. But that would have risked leaving too many people without jobs." Even now, the economy has 3.6 million fewer jobs than before the pandemic.

Yet many economists argue the Fed remains too optimistic about inflation and the rate will stay well above the Fed's 2 percent inflation target this year.

"What is currently expected in terms of what the Fed is going to do in 2022 is just far too little," said Jon Steinsson, an economics professor at the University of California, Berkeley.

Steinsson spoke Saturday on a panel discussion of inflation at the annual meeting of the American Economic Association. Steinsson noted that adjusted for inflation, interest rates are in negative territory despite the economy's rapid progress.

All three economists on Saturday's panel -- Steinsson; Jason Furman, a Harvard economist and former top adviser to President Barack Obama; and Joseph Gagnon, a senior fellow at the Peterson Institute for International Economics and former Fed economist -- said they thought inflation, under the Fed's preferred measure, would remain at least 3.5 percent by year's end. The Fed thinks it will fall to 2.6 percent.

Powell has frequently said that if the pandemic fades, inflation will decline because supply chains will untangle and more people will take jobs. But Furman argued other trends will offset some of those benefits. Once COVID-19 cases decline, he said, people will likely drive more and send gas prices up. And as with previous re-openings of the economy, prices for hotel rooms, airline tickets and rental cars could climb.

The Fed had hoped more people would resume searching for work once enhanced unemployment aid ended nationwide in September. Schools also reopened that month, potentially freeing up more women to return to work after caring for their children during online school. Yet that influx of workers didn't happen. There are still 2.2 million fewer people working or looking for work than before the pandemic.

Instead, businesses' desperate demand for workers -- with job openings near a record high, in November, of 10.6 million -- has sharply pushed up wages.

Gagnon said Saturday the Fed has been too cautious in part because it is too concerned about preparing financial markets for policy changes, particularly after 2013. Back then, in an episode known as the "taper tantrum," Chairman Ben Bernanke unexpectedly said the Fed would soon taper the bond purchases it was engaged in, a remark that caused gyrations in stock and bond prices.

"They were scarred by the taper tantrum," Gagnon said. "I think they have veered too far to the other side to try to minimize surprising markets."

Gagnon also defended the Fed, though, noting the complexity of the economy during the pandemic.

"It seems incredibly slow what they're doing, but they're turning a supertanker, they're communicating to markets, they are moving in the right direction, it's clear that they're focused on the right things," he said.

The Fed can also accelerate its tightening of credit if necessary, Gagnon said.

"If we are right about our inflation worries, they'll be doing more than three rate hikes this year," he said.

Print Headline: Question for Fed: Has it waited too long to fight inflation?