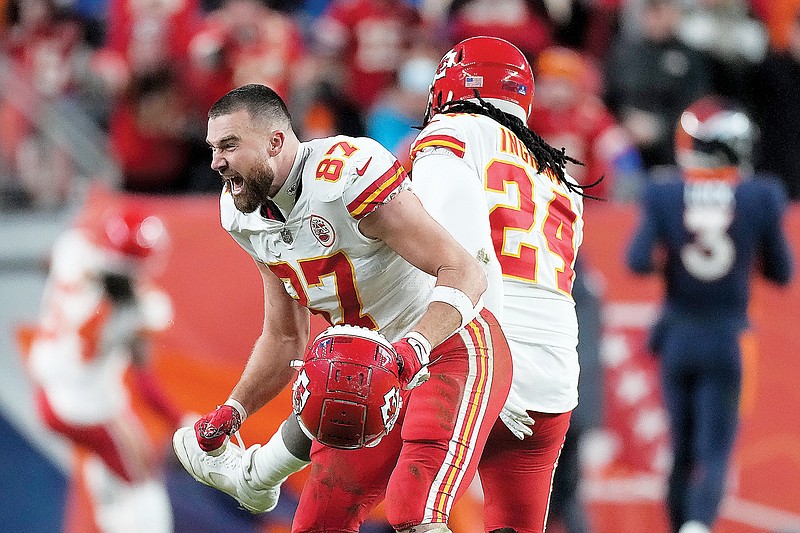 Chiefs tight end Travis Kelce and linebacker Melvin Ingram (back) celebrate after Nick Bolton returned a fumble for a touchdown during the fourth quarter of Saturday’s game against the Broncos in Denver. (Associated Press)

The Kansas City Chiefs did what they had to Saturday, beating the Broncos on the road to finish up the regular season.

Too bad the Titans did what they had to Sunday, too.

So rather than have the No. 1 seed and a first-round bye, the Chiefs will face seventh-seeded Pittsburgh on Sunday night in the wild-card round at Arrowhead Stadium. It will be a rematch of a game from just a few weeks ago, when the Chiefs led 23-0 by halftime and rolled through the second half in a 36-10 romp.

“When you get a first-round bye, it’s more of a win because you’re getting past a round in the playoffs, which are never easy,” Chiefs quarterback Patrick Mahomes said. “But we’re ready to go wherever against whoever. We just go in with the mindset of we’re going to have to play each-and-every week to get back to that Super Bowl.”

The Chiefs didn’t exactly cruise into the playoffs, though. The hot streak they were on when they played Pittsburgh ended the next week, when the Bengals not only ended their eight-game win streak but also knocked them from first place in the conference.

And they weren’t exactly great Saturday against the Broncos, either.

The Chiefs struggled to contain the Denver ground game, gave up too many long runs to fill-in Broncos quarterback Drew Lock and trailed on the scoreboard until the fourth quarter. That’s when linebacker Nick Bolton bailed them out by taking a fumble 86 yards for a score that finally gave Kansas City the lead for good in a 28-24 win.

The Chiefs certainly would have preferred to have this weekend off as the No. 1 seed. But the fact their game against Denver was flexed to Saturday at least gave them an extra day to rest up and get ready for a playoff run.

“We’ll be ready,” Chiefs coach Andy Reid said. “We’re going to utilize whatever time we have to make sure we get ourselves right for the next game.”

• While the Broncos followed the tried-and-true game plan of doubling Travis Kelce, and Tyreek Hill who was hobbled by a nagging injury, the rest of the receiving group took a step forward. Mecole Hardman caught eight passes for 103 yards, Byron Pringle caught five balls for 56 yards and Demarcus Robinson had three catches for 19 yards.

• Pregame warmups need some help. Two weeks ago in Cincinnati, left tackle Orlando Brown Jr. hurt his calf muscle and was unable to play, an injury compounded by replacement Lucas Niang hurting his knee after five offensive plays. This week, Hill aggravated a heel injury — though he did play a bit — while jumping up to catch a pass in warmups.

• Bolton got off to a slow start during his rookie season, but he’s finishing it in a hurry. As in, hurrying to the end zone for that touchdown return against the Broncos. The young linebacker also led the Chiefs in tackles Saturday, though that has become the norm during the second half of the season.

• Frank Clark’s mercurial season continued in Denver, where one of the highest-priced players in the NFL had a single tackle without putting any pressure on the quarterback. Clark has 41/2 sacks this season while carrying a salary cap hit of $28.5 million, which means Kansas City is paying about $6.3 million per sack. That’s bad business.

• Hill is expected to be fine going forward. Darrel Williams is dealing with a toe injury, further thinning the running back group. RB Clyde Edwards-Helaire still hasn’t practiced since hurting his collarbone against Pittsburgh a few weeks ago.

• The Chiefs turn their attention to the playoffs with the goal of reaching a third straight Super Bowl. They also could host a fourth consecutive AFC Championship Game if things fall the right way for them.

• The Chiefs and Steelers meet again in the playoffs. They’ve won the past two against Pittsburgh, but it was Mike Tomlin’s bunch that won their previous playoff matchup in January 2017. That also was a wild-card game played in Kansas City.