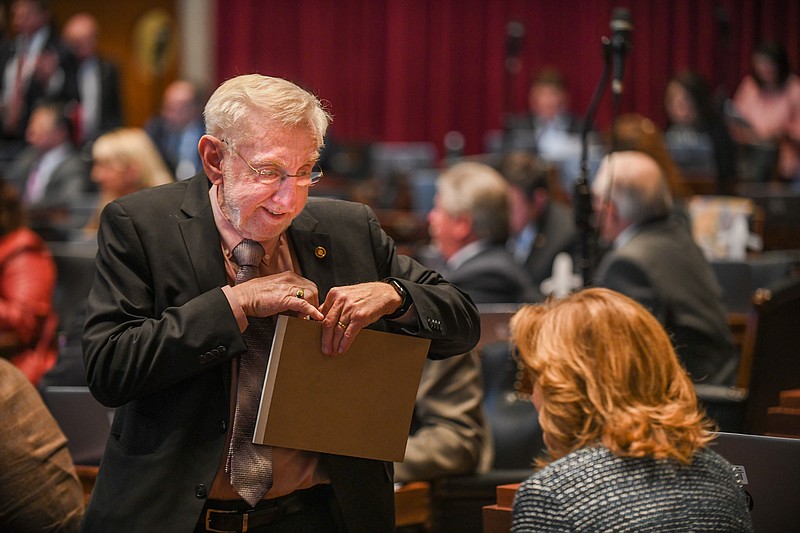 A letter from Rep. Rudy Veit, R-Wardsville, (shown above) and Rep. Dave Griffith, R-Jefferson City, was referenced during a budget committee hearing Monday; the letter was sent to House colleagues in support of Gov. Mike Parson's plan for pay increases for state employees.

Last month, Gov. Mike Parson announced he wanted the Legislature to pass a $15 minimum wage and a 5.5 percent cost of living adjustment for all state employees, as well as some extra funds to address wage compression resulting from the new baseline.

Funded through supplemental appropriations, Parson told lawmakers he wanted the pay increases to be passed and implemented by Feb. 1.

The pay plan was the first topic of discussion for the House budget committee's packed hearing Monday.

Representatives largely spoke in favor of the wage increases, recognizing the state's standing as one of the last for state employee pay, widespread department vacancies and the need to start somewhere.

"'When we invest in our own people, this is an investment in our state,' again, these are not my words, these are the words of my Republican colleagues who are fighting for those employees who are in their district," Nurrenbern said. "Ladies and gentlemen, if you have not read that letter, go back and read it. This is speaking the truth."

Griffith said the Jefferson City legislators sent the letter prior to the start of the session to remind colleagues about the importance of state employees not only in the Capital City, but in their home districts.

"For years and years, Missouri has had the lowest paid state employees in the entire country, and we need to get down to the bottom of it," Griffith said. "We need to try to figure out some way that we can compensate them and not lose the historical knowledge that they bring to state government and support them."

State Budget Director Dan Haug said the Office of Administration has found economic indicators corresponding to salary increases have increased 59 percent during the last 20 years, while state pay has only increased 30 percent.

The pay increase plan has support from committee Democrats, as well as several Republicans on the committee, including House Budget Chairman Rep. Cody Smith, R-Carthage.

Although not present Monday, Smith has said he recognizes the urgency to address state workforce needs and wants to move the legislation early.

"This will ensure that the state is able to retain talented employees who will continue providing essential services to the citizens of our state," Smith said when the governor announced the plan.

Rep. Scott Cupps, R-Shell Knob, was the only member of the budget committee to express strong opposition to the pay increases.

Cupps railed against the governor's veto of pay increases for state child welfare workers last year, the new blanket-increase approach and the lack of study to show how the pay increases are likely to play out.

Most members of the committee were open to the pay plan, but had questions about specifics, such as why it needed to be done by Feb. 1, how it would be sustained and how big of an issue staff vacancies are.

In total, the pay plan would cost $119 million; Haug said $55 million of which would come from general revenue. The remaining costs would come from federal appropriations and other funds, according to the legislation.

In addressing how the state would be able to maintain the salary increases into the future, Haug said none of the money would come from federal COVID-19 relief, noting the governor has made an effort to only use one-time funding on one-time expenses.

"Even at a very conservative growth rate of 1.5 percent growth in general revenue, we can easily afford this ongoing pay increase and some of the other ongoing things that I think you'll see when we release our 2023 budget recommendations," Haug said.

State general revenue collections have grown by an average of 3-3.5 percent each year for the past 25-30 years, he said.

Haug also said the pay plan is sustainable with the increased costs associated with Medicaid expansion.

Haug said the pay plan should be approved before Feb. 1 to quickly combat the effects of a tightening labor market and to avoid pay disruptions for employees receiving the federal pandemic stipend.

Employees working in state residential care facilities -- such as prisons, mental health institutions, veterans homes and youth residential facilities -- have been paid a $250 stipend each paycheck for working with COVID-19 patients. The federal CARES Act that supplies those funds doesn't allow the stipend to be paid in 2022.

"We want to make sure that we're filling in that gap," Haug told the committee. "We are seeing quite a bit of turnover in all areas, and we don't want to see -- we're getting to the point where if we have more vacancies and more turnovers we're not going to be able to operate our state facilities."

Haug said the state has roughly 4,000 positions it has budgeted for that aren't currently filled.

Across all departments, the state has a turnover rate of 26 percent, Haug said, which is well over the usual 10 percent found in a healthy organization. It's also higher in some areas.

The turnover rate for state employees making less than $30,000 a year is almost 55 percent, he said.

"That's why we're looking at getting the bottom of the pay scale up relatively significantly, because we're seeing just massive turnover in those," Haug said. "And those are our direct care positions that are working with some of the most vulnerable Missourians out there."

In the last 15 years, roughly 10,000 state positions have been eliminated, Haug said, so there is no room for more cuts. Also, most institutions are operating with minimum staffing.

He said the state's current process of covering vacant positions with mandated overtime is not the way facilities should operate and it turns employees away.

Haug used the state's staffing situation in Fulton as an example of the larger issue around the state.

The state has three facilities in Fulton -- a prison, a mental health hospital and a youth facility -- and all are struggling to retain employees with a local Dollar General distribution center starting employees at $17 per hour.

Haug said the state could open another ward at the Fulton State Hospital, but a lack of staff has prevented the expansion and is keeping about 170 people in jail that should actually be treated at the mental health institution.

"We don't have the staffing to get that unit up and going so we're hoping that these pay increases that we are proposing will do that," Haug said.

Despite early signs of acceptance in the budget committee, Griffith said he expects the pay plan to be a minor uphill battle.

"I hope it's not going to be that big of a battle because I think they all understand that we need to do something," Griffith said.

Griffith said he's working with Veit and Bernskoetter to make sure the pay plan happens "in some way, shape or form."