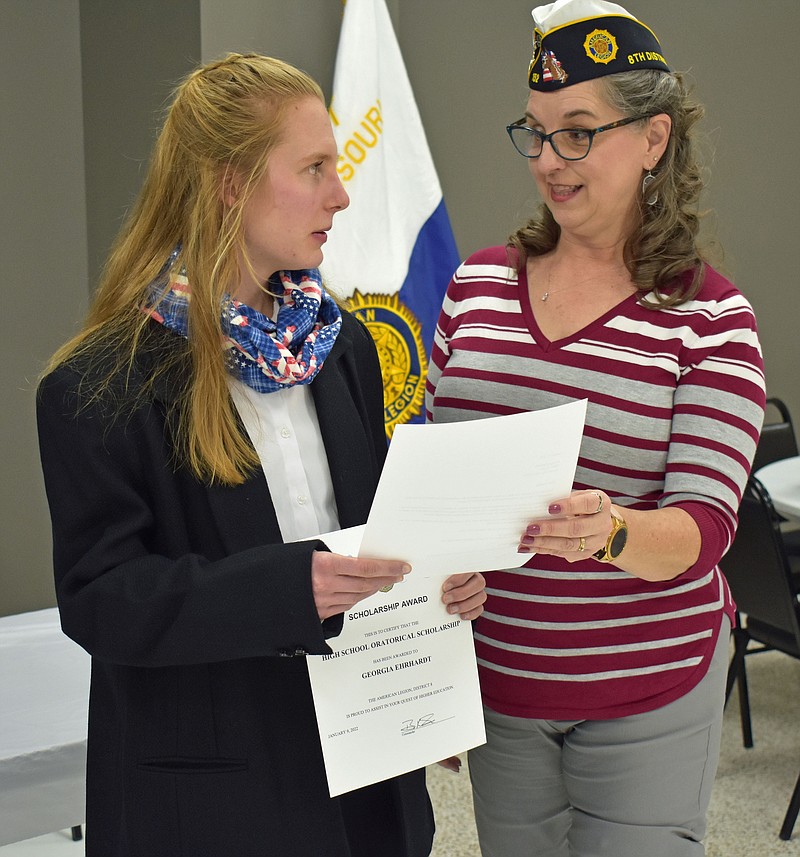 At left, Georgia Ehrhardt, 16, accepts first place and a $500 scholarship from Christine Sapp after competing in the 88th annual High School Oratorical Scholarship Program Sunday, Jan. 9, 2022. Next, she'll compete in one of four state zone competitons. Sapp is the chairwoman of the district competition. (Gerry Tritz/News Tribune photo)

Georgia Ehrhardt, a junior at Russellville High School, delivered two speeches on the U.S. Constitution in front of a couple dozen people Sunday at the American Legion Post 5.

What she didn't know while giving her speeches was that no one was judging them; she was the sole contestant in the competition. Just by showing up and delivering the speeches at the Legion's district High School Oratorical Scholarship Program, she took home the prize: a $500 scholarship.

"It's a great experience to come here and be able to speak in front of a crowd and just give the speech I've been preparing," Ehrhardt said. "And I'm thankful to everybody for letting me do this and everybody who's helped along the way."

Her English teacher, Denise Crider, told her about the competition and came to watch her perform in it.

She said it was the first time she's done the American Legion competition, but has prior experience in public speaking from FFA. She said she spent about a month preparing for Sunday's speech.

During her first speech, she weaved her faith into a speech about the importance of the Constitution. She said we are obligated to speak out if we're not happy about our government leaders, but we're lucky to live in America with the freedoms we have.

"I've grown up in a Christian home my whole life," she said after the competition.

She said her faith was boosted a decade ago after years of praying for a sibling. Her mother had a baby boy -- her now 10-year-old brother, James -- after doctors told her she wouldn't be able to have a baby.

"It just really hit me that God did," she said. "What can I do to give back to Him?"

The competition is open to all high school students.

The purpose of the contest is to "develop knowledge and appreciation for the United States Constitution, the ability to think and speak clearly and critically, and the acceptance of the duties, responsibilities, rights and privileges of American citizenship."

The first speech gives competitors the ability to speak on any aspect of the Constitution they choose. The second is a specific topic in which speakers have five minutes to research/prepare before delivering their speech.

Ehrhardt's assigned topic for her second speech was Amendment III: "No Soldier shall, in time of peace be quartered in any house, without the consent of the Owner, nor in time of war, but in a manner to be prescribed by law."

She asked people to imagine being a colonist and have a Red Coat soldier ask to stay at their homes and talked about the importance of the amendment to protect privacy.

Ehrdardt works part-time as a non-certified tech at the Hy-Vee pharmacy and hopes to go into that or into the medical field in the future.