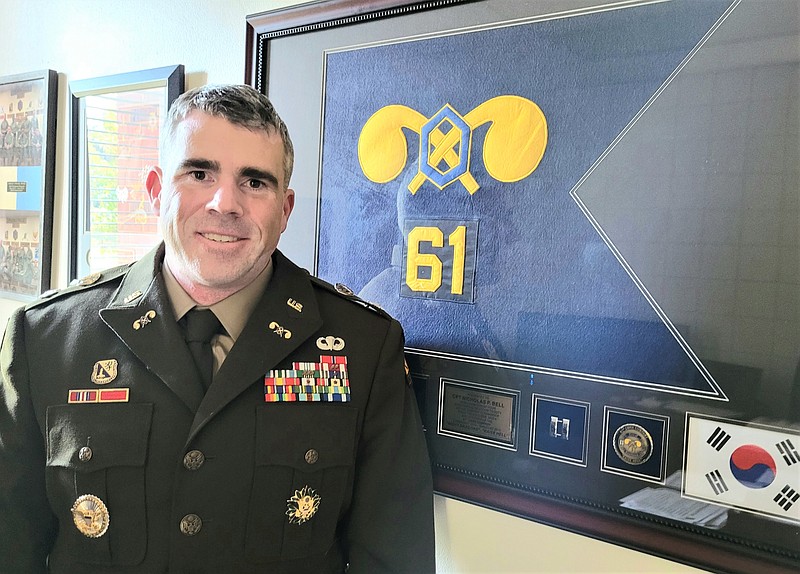 Approaching the sunset of his military career, Lt. Col. Nick Bell maintains he has found his calling as professor of military science for the ROTC program at Lincoln University. It is a position that affords him opportunities to embrace his background as a military officer and experiences derived from serving in key position -- stateside and overseas, during peacetime and in combat zones.

After graduating high school in 2001 in Goshen, Indiana, Bell noted securing a college education became a personal priority. After visiting St. Norbert College near Green Bay, Wisconsin, he realized the beautiful campus would become the location of his collegiate pursuits.

"It was a private college, and I needed to find a way to pay for it," he explained. "I applied for the Army ROTC program and received a three-year scholarship, which was a huge help in covering the costs of my education."

In addition to his academic studies, the ROTC program afforded him occasions to develop skills as a future military officer during summer training camps. Through the military training program, he was also able to complete Airborne School, where he made five parachute jumps.

The college experience also introduced Bell to Emily, who he married in 2005.

"I graduated with my B.A. in philosophy with a minor in German in 2005 and was commissioned a second lieutenant in the U.S. Army," he said. "Then I went to Fort Leonard Wood for my Officer Basic Course. I selected the Chemical Corps for my officer branch because it has such a small cadre and their mission interested me."

With his initial training complete, Bell was transferred to a field artillery battalion at Fort Riley, Kansas. Shortly after his arrival, he and his fellow soldiers deployed to Iraq.

"We arrived in country in February 2007 and essentially reorganized as an infantry unit that conducted security missions and counter-insurgency operations in central Baghdad," he said. "Although I was assigned as the chemical officer, I helped oversee operations for the battalion during the deployment."

Following the battalion's return from deployment in April 2008, Bell was promoted to captain and returned to Fort Leonard Wood for his Captain's Career Course. During this period of training, he received certain hazardous materials certifications, learned the processes for containing chemical spills and how to function as a brigade-level chemical officer.

During the spring of 2009, he transferred to the 62nd Medical Brigade at Joint Base Lewis- McChord in Washington. For the first year, he fulfilled the role of the brigade chemical officer; however, when the brigade deployed to Afghanistan in 2010, his responsibilities were modified.

"We were stationed at Bagram Air Base in Afghanistan and had the mission of overseeing all U.S. medical units in the country," he explained. "Essentially, I became a medical operations planner and traveled around as medical units came into the country so that I could help them get established and integrate into their mission assignments."

Returning from Afghanistan in the spring of 2011, he went on to serve as an assistant operations officer with a chemical battalion at Fort Lewis, Washington, later assuming command of one of the companies in the battalion.

"In the middle of my command cycle, in January 2013, they moved the unit to Camp Stanley in Korea," he said. "With the North Korean threat, they wanted our unit in the region to react to any potential deployment of weapons of mass destruction."

He added, "Going to Korea felt real because we were so close to the threat. We had a real focus to train on."

When his company command in Korea came to an end, he stayed with the unit as an assistant operations planner before returning to the states in 2014. Accepted into a special internship program, he attended Georgetown University for one year, earning his master's degree in policy management followed by his promotion to major.

"The next year of the internship I was assigned to the Chemical-Biological Defense Office in the Pentagon," he said. "There had been concerns revealed by a lab that had been inadvertently shipped live anthrax for testing. In that position, I learned a lot about crisis response by gathering information and writing reports for leadership."

Major Bell would briefly serve with the Army Talent Management Task Force -- an effort to update and revolutionize the way the Army manages its people. From there, he was transferred to Fort Leonard Wood in 2017, serving as an executive office with a basic training battalion and later as a brigade operations officer.

Another interesting bookmark in his career came with his two-year assignment as the operations chief with Joint Task Force North, helping oversee command and control of active-duty soldiers serving along the border between United States and Mexico.

"My assignment as the professor of military science at Lincoln University came in July 2021," Bell said.

Recently promoted to lieutenant colonel, he explained his wife and four children enjoy the stability of living in Mid-Missouri, while he continues his efforts to mold future military leaders

"Throughout my career, I have experienced many interesting missions and duty assignments, but working with the ROTC cadets at Lincoln University has been one of the most rewarding," he said.

"This is a job that I sought and, having myself gone through the ROTC program, I view it as a way to give back," he added. "I want to leave a legacy and this is where I believe I can best do that by passing the torch to our future military officers."