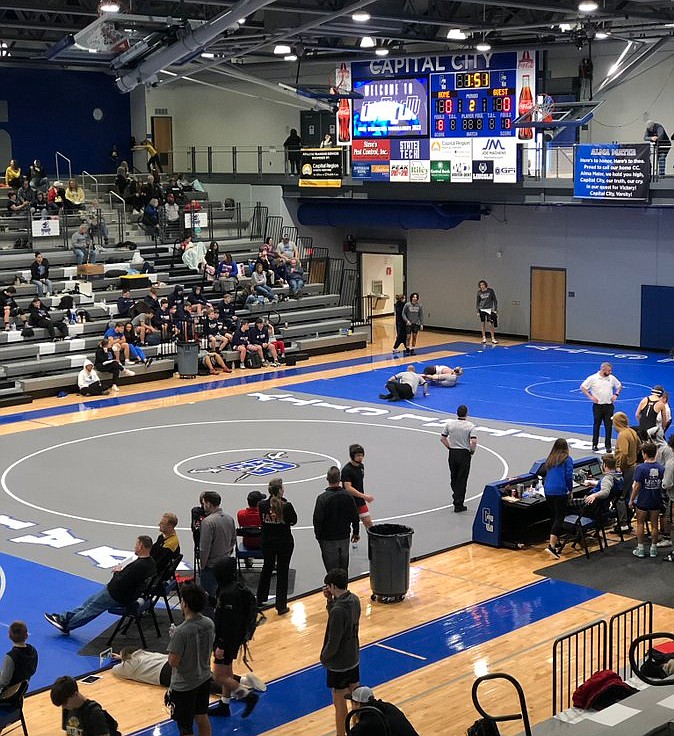 The Jefferson City Jays viewed themselves as a bit of an underdog going into the title dual Saturday.

But they didn’t wrestle like one as Jefferson City defeated Capital City 52-21 to win the title in the Capital City Duals Tournament at Capital City High School.

“I told the kids before they went out to just wrestle like they were in the practice room and that’s what they did.”

Jefferson City won by fall in six of the first seven matches against Capital City to take a 36-6 lead. It was 42-12 when the dual went to the 106-pound match between Seth Stumbaugh of the Jays and Austin Feely of the Cavaliers.

One thing Cagle stressed going into the dual was avoiding pins. And Stumbaugh did that in falling 8-2 to Feely.

“You’re always working the points in your head,” Cagle said.

With the Jays already at 42 points, that meant the dual was decided.

“I told him he just won us the dual,” Cagle said. “They had all the momentum then, but by not getting pinned, he won it for us.”

Friederich won all of his matches by fall. Berendzen won four times by fall, all in the first period. Enloe also had four wins by pin.

Kuster, who had two pins Saturday, picked up his 100th career victory Saturday and now has 102 wins as a Jay.

“That’s a big deal to reach that number,” Cagle said.

Werdehausen also won twice by fall, while Stafford had one pin.

Going 4-1 for jefferson City were Eli Tiberius at 126 and Cameron McKee at 138. Three of McKee’s wins were by fall.

“We have effort, we showed heart, that’s all you can ask from kids,” Cagle said.

“Poplar Bluff was tough,” Cagle said. “Our lighter weights won it for us, that’s super.”

Jefferson City is back in action Wednesday night against Battle and Eldon at Fleming Fieldhouse.