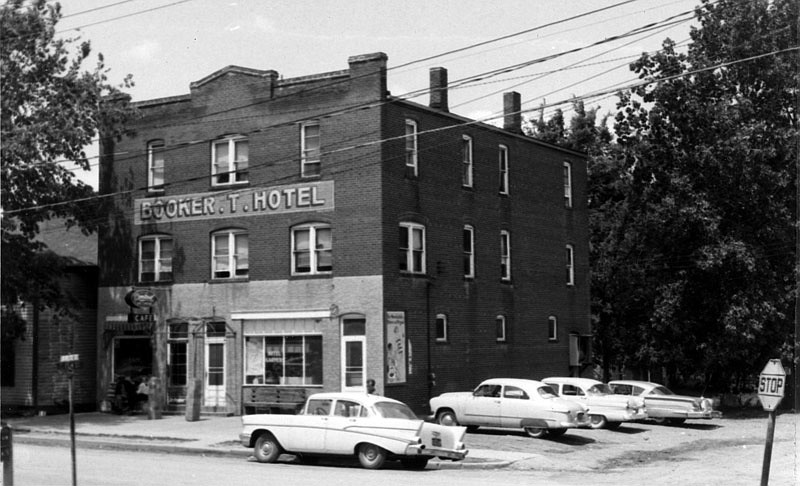 The Booker T. Hotel was one of several businesses that once thrived in the 600 block of Lafayette Street, the area of Jefferson City known historically as The Foot.

How does a community preserve history that doesn't have a physical home?

That's the question a committee charged with revising the Capital City's historic preservation code is asking.

And at the local level, properties recognized as locally significant come with protections and regulations to maintain the historical integrity of the property.

However, all over the country, Black communities lost land and buildings to urban renewal in the 1940s-60s.

The Foot covered an area on Lafayette Street from East McCarty to East Dunklin streets, as well as blocks of East Miller, Elm, Cherry and Marshall streets.

Around 2016, all but two of The Foot's historic properties that survived the first razing were taken in the Missouri Department of Transportation's Whitton Expressway interchange with Lafayette Street.

As part of facilitating the conversation about how to recognize communities like The Foot in city code, the Historic Preservation Code Review Committee, which is leading the code revision, met Thursday night with Vanessa Adams-Harris from Tulsa, Oklahoma.

She's the director of outreach and alliances at John Hope Franklin Center for Reconciliation. The center works to educate about the history of people of color in Tulsa and drive conversations about reconciliation for that lost property, culture and community.

The committee invited Adams-Harris to a meeting after members brought up The Foot and lack of recognition of it.

Adams-Harris said her community ran into the same issue with historic preservation of these Black communities that Senzee discussed.

"When we get to the table of understanding, there are these tax credits for preservation purposes; the community is excited for one and then disappointed for another," Adams-Harris said. "Disappointed in the way that you can't really have a tax credit unless you have a building and the building has to be of significance. What does that look like for an African American community? Therein lies the rub in that what it looks like is very sad."

She said work in Tulsa started by getting past the history of the 1921 Tulsa Race Massacre. During the massacre, mobs of white residents -- some of whom had been deputized and given weapons by city officials -- attacked Black residents and destroyed homes and businesses of the Greenwood District in Tulsa.

The Tulsa group's work came through a study into the history of the area over time to see how things changed, grew, developed and destroyed.

Next came a reconnaissance survey of the massacre.

"That opened up a whole other ball of wax because then we get really heavy and deep into the world of historic districts and preservation, and really understanding that the community didn't have any buildings left after urban renewal," Adams-Harris said. "It had plenty of buildings that we can see from maps from the '50s on up into the '60s, but then we get the highway smashed right over the center of what was a relevant area of the community. Those buildings are gone."

Maneuvering preservation code proved to be one challenge the Tulsa community faced and continues to face, Adams-Harris said.

"The main emphasis and focus we had to keep in front of us was we were determined to not only know the codes and know the laws and understand what preservation is, but then let us grapple with that in a very open way," she said. "There were many times when literally we were yelling and screaming at our preservation office, and I understood that their hands were tied."

How to recognize The Foot isn't the committee's goal, Senzee said. Its goal is to review the historic preservation code and make recommended changes where needed.

However, while doing that, the committee can be informed on conversations like that in Tulsa and keep it in mind when suggesting changes, Senzee said.

For instance, the group plans to recommend a local historic district category for archaeology, which other cities around the country are adopting, Senzee said.

"If we find something that's historic and we don't want to dig it up, that's a measure that you could take," she said. "Is there anything that is identified right now as an archeological local historic district? No. But if we find it and then we don't have any ordinances on it, it's hard to (preserve)."