BizBeat: Former House of Bargains to open as new store 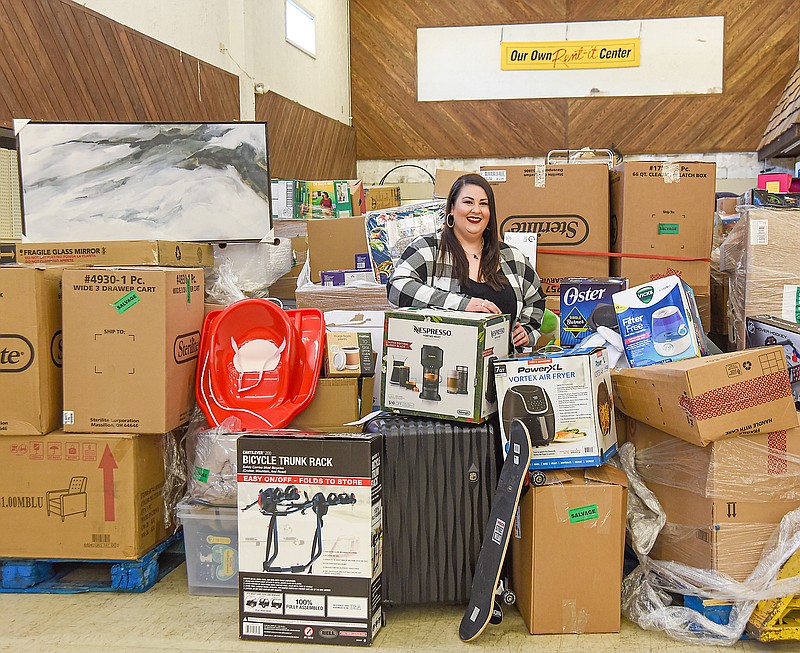 Julie Smith/News Tribune DeAnne Bogg poses with boxes items to be unpacked and placed in bins for customers to purchase at the new iteration of the longtime, locally owned family business, House of Bargains. Inventory will consist of chain store overstocks and returned items, which are not damaged, but cannot be restocked in those stores and sold. Bogg's grandfather started the original HOB, which was then run by her parents, making her the third generation to own the business.

Although House of Bargains closed its doors in early October, the bargains will continue as the previous owner's daughter turns it into a new store.

DeAnne Bogg has purchased the building and is turning it into an overstock and furniture store, scheduled to open Saturday.

Bogg's grandfather opened House of Bargains at 5505 Business 50 West, just west of Jefferson City, in 1959 and operated it until her father took it over in the '70s. In 2017, Bogg's mother took over the business before closing it in October 2021.

"I couldn't imagine this store going to anyone other than a Bogg," Bogg said. "That's what made me decide to open this business."

As a tribute to the Bogg family and House of Bargains, the store will be named its acronym, HOB.

It will be a "bin store" where overstock and unused, returned merchandise from big-box retailers is sold for a lower price.

The items are dropped off at the store weekly.

"You never know what you're going to get, and that's kind of the exciting part about it," Bogg said. "Basically, we just take these items, and as long as they're not damaged, we basically dump them into big bins throughout the store and customers get to come in and dig through those bins for really awesome bargains."

The items in the bins will operate on a step-down pricing system, meaning everything in the bins will be same price, and the price will lower each day from Saturday to Wednesday. All bin items will be $7 on Saturdays, $6 on Sundays, $4 on Mondays, $2 on Tuesdays and $1 on Wednesdays.

"We use that time to get new trucks in and restock so that we'll have a fresh new inventory for Saturday morning again," Bogg said.

There will also be premium, bigger-ticket items that will be placed on shelves around the perimeter of the store and cost about $15-$100.

The west side of the building, where Frenchie's Antique Mall used to be, will be turned into a furniture store with used and new furniture.

HOB will also continue House of Bargains' tradition of selling fireworks in the summer, with a fireworks stand inside the building.

"I think the public's really going to like this," Bogg said. "It's going to be a lot of fun, and I think people are going to be extremely excited about all the good deals we're going to have."