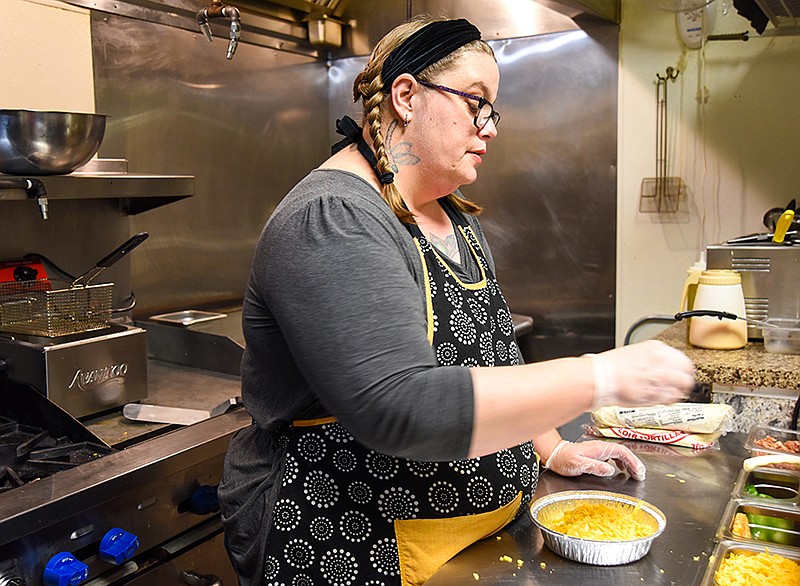 Amanda Jensen works in her kitchen at La Chica Loca, at 306 E. High St. in Jefferson City, where she was busy making bowls and burritos Thursday, Oct. 28, 2021, as online orders came in. (Julie Smith/News Tribune photo)

After reopening in October for pickup and delivery only, La Chica Loca is now a full dine-in restaurant again.

"There's an energy that comes from a restaurant that doesn't happen when people are just picking up food to go," she said. "It's just different. It's kind of like welcoming people in your home because you get to feed them all the delicious things you made. You don't get to see them enjoy it when they're taking it to go."

On Friday, La Chica Loca also began a pop-up birria tacos restaurant, which will be open 5-8 p.m. Wednesdays-Fridays and 4-8 p.m. Saturdays until March. However, it may continue after February if it's successful, Jensen said.

The restaurant's catering option will continue, and the food truck will open again in the spring.

Jensen and her husband, Greg Atkinson, aka "Chef," first opened La Chica Loca at 202 E. High St. -- which now houses Bella Roos -- in 2018. Shortly after opening, the building was evacuated because of a damaged common wall it shared with 200 E. High St.

In 2019, it was operating as a food truck based on East Capitol Avenue when the May 2019 tornado slammed it against the back of the wall of what was Avenue HQ and destroyed the truck. That closed the business for the most part, and the owners raised money from supporters for the planned restaurant. The restaurant then opened at 306 E. High St. in January 2020.

Despite setbacks and pandemic-related challenges, the business was moving forward. However, a personal tragedy changed things. After their daughter's death, La Chica Loca operated as only a food truck for about four months as Jensen took time to grieve.

In October, the restaurant opened again for pickup and delivery only. Jensen was running the restaurant by herself while Atkinson continued to run the food truck.

Now, Jensen has hired a cook for lunch and breakfast and has help from two employees who worked at the food truck, allowing the restaurant to be open for dine-in. Jensen will work at the front of the store.

"Being able to communicate and see everybody, that's what I need is that connection with people," she said. "So I'm really lucky that I was able to hire a good cook."

Offering only to-go options, she said, was mostly just a trial period for fully opening again.

"I didn't really think I was always going to keep it as a to-go restaurant; it was just a way to progress," she said. "It was more of a test to see if I was ready to move forward."

Jensen said she's thankful that through all the challenges, her business has persevered.

She said she wants to thank the community for its support.

"It's our community that lifts us up," she said. "This community is so amazing. I feel like I spent my whole life searching for home, and nothing ever felt like home until this place. I will never leave it. I love this place and the people so much."